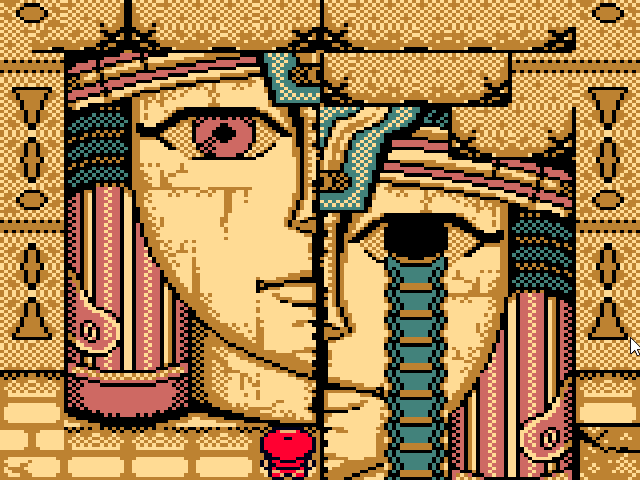 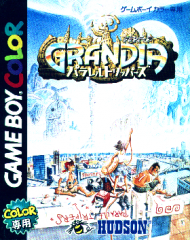 Grandia: Parallel Trippers is a Game Boy Color RPG from 2000 and a spin-off of the original Grandia. It’s an alternate world story in which Japanese students Yuuhi, Mizuki and Shirou are teleported into the world of Grandia—although not quite the Grandia of the first game. More like a fan service version of that world.

Yuuhi, the protagonist, is immediately separated from his peers. He meets Liete, Feena and Sue, who join Yuuhi on a mission to find Mizuki and Shirou and return to Earth. To do this they have to find three keys that unlock a seal in a mysterious place called the White Tower. But as can be expected things don’t go as planned and Yuuhi winds up joining with the extended Grandia cast to save the world.

An energetic boy from Japan. Basically what you’d get if you reduced the Grandia protagonist archetype to his simplest form. A well-rounded character in battle. 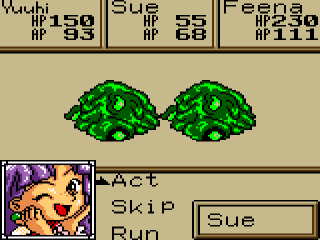 As the first and only hand-held game in the series (until the first two Grandias were retroactively made hand-held with their Switch re-releases, anyway), Game Arts president Hirokazu Miyazki said the goal with Parallel Trippers was to create an accessible title in every sense of the word, easy to play for veterans and newcomers alike and playable on the go. The music is all Noriyuki Iwadare’s fantastic work from Grandia, downsampled to fit onto a 32 MB cartridge.

Parallel Trippers is a game for fans of the first Grandia game through and through. Aside from some nice graphical work with the GBC’s limited palette (check out the Sphinx in the first town for example), almost everything here exists solely as fan service.

While you always directly control Yuuhi, at least until the post-game, there is a whopping 29 playable characters. All 28 aside from Yuuhi are returning characters from Grandia, which means not only do you get the original playable cast but a number of the game’s colorful side characters like Java, Gantz, Sergeants Saki, Mio and Nana and even Tentz.

Dungeons contain more platforming elements than before since Yuuhi can jump on screen, but otherwise they are standard for the series. Most of your time will be spent searching through labyrinthine corridors for triggers, levers and keys to access the next area. Pinky adds a wrinkle to this process as you are now able to use him to manipulate objects from afar. Like many Game Boy games, Parallel Trippers doesn’t center the player-character on the screen and auto-scroll but rather moves from map to map with horizontal and vertical swipes.

One draw beyond the chance to see fan-favorite characters in action again is the synthesis card battle system. This system retains the IP Gauge, but the players and enemies are no longer scattered on a combat field. Rather each character is represented by a icon on the IP Gauge, which moves along determined by the character’s speed stat. 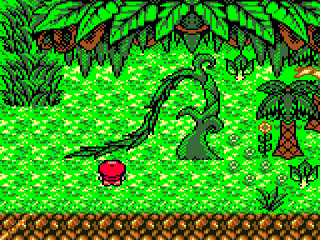 Characters take action through “synthesis cards.” The cards are a convenient way to combine magic, skills, weapons and items into one system, as instead of buying new inventory you buy or find these cards. Using them in battle is, for the most part, effectively the same as using magic or attacking, but can also be used in combination to produce extra effects. Like a lot of GBC games, limited text space means a lot of cards don’t clearly indicate what they do, but it’s easy to guess or at worst experiment and find out.

Leveling up only raises your HP, meaning most character growth comes from equipping accessories. While another obvious case of streamlining the RPG experience at a smaller scale, this works in a game that for some reason tries to cram in 29 characters into the playable roster since it significantly reduces the amount of grinding you’ll need to do.

Battles, while not complicated, do require strategy. But it’s mostly that Shin Megami Tensei style strategy of just figuring out which elemental weakness to exploit and piling those magic cards onto the enemy until it’s wiped out. Unlike every Grandia game except Xtreme, there’s a modicum of post-game content. But unlike Xtreme, you aren’t rewarded with a new ending or anything. There’s just a few new areas to explore and you can explore them without Yuuhi in the party.

In March of 2012, Adventurous Translations completed an English translation of Parallel Trippers. The group was formed solely for the task of translating the game. The name comes from the overarching theme of adventure in Grandia, and, according to the group’s description, “the intent of its members discovering and learning about new facets of the ROM translation process as work progresses.” Adventurous was formed by Richard Davies, aka Mr Fwibbles, who was an admin for the Vast Lands of Grandia, a now defunct Grandia fandom website.

Adventurous has since worked on translations of Nangoku Shounen Papuwa-Kun: Ganmadan no Yabou for the Game Boy Ganbare Goemon Gaiden 1 and 2 for the NES.