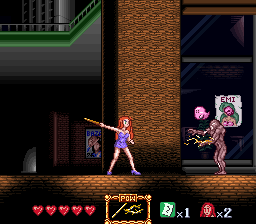 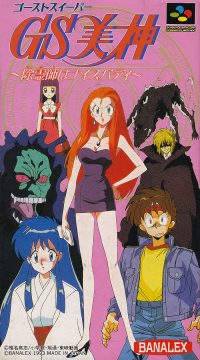 First published in 1991, in Weekly Shounen Sunday, GS Mikami Gokuraku Daisakusen!! (or “Ghost Sweeper Mikami: The Great Paradise Battle!!”, henceforth shortened to “GS Mikami”) by Takashi Shiina tells the story of Reiko Mikami who owns the Mikami GS Company, a private exorcism firm considered to be the best around. Ghosts and other spirits have been forced out of their homes due to the crowded population in Japan and begin to run rampant, requiring Ghost Sweepers to exorcise them for a price.

GS Mikami’s premise naturally lends itself to video games as well and received two, with this being released first on September 23rd, 1993, for the Super Famicom in Japan only. With the subtitle roughly meaning “The Exorcist Has a Nice Body”, the game was developed by Natsume and published by Banalex, a former subsidiary of Bandai. Players take control of the titular Ghost Sweeper as she exorcises ghosts across seven different “Reports,” collecting gemstones for a goddess statue she receives in the mail. Each gem adds a piece of armor to the goddess and is said to grant a wish to anyone that completes the set; being money-minded, Mikami takes her assistants Yokoshima and Okinu to find the gems and wish for billions of yen! 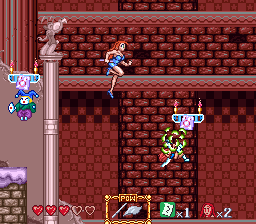 Despite being a licensed product, GS Mikami can be considered a hidden gem on the Super Famicom due to its tight controls and anime-style presentation; unfortunately the brevity of the game and its uneven difficulty tend to hold it back from its true potential, leaving a solid experience that may have you wanting more. Opening with a wonderful rendition of the anime’s theme song, the game lets you know right away that it has a strong emphasis on presentation over customization: the options menu offers little-to-no variety other than difficulties, stereo/monaural audio, and password input. Even the difficulty selection, however, is scarce; the only options are “Easy” and “Normal” with the former shortening the game to three levels out of seven.

The general gameplay is reminiscent of games like Valis and Castlevania but with quite a bit more polish in the controls, particularly with attacking and jumping. Mikami can attack quite quickly with her magic staff using the Y button, and by pressing Up+Y she swipes the staff downward. Elemental power-ups for the staff can be collected from pots strewn about the areas: lightning shoots a bolt straight forward and pierces enemies, ice shoots two shards in a spread, and the pink icon shoots a tall energy wave forward slightly- at any time, however, the Up+Y attack omits these special effects. Magic talismans and jewels may also appear and are activated with the X button: the talisman absorbs all non-bosses into a vortex to clear the screen. The jewel, resembling a droplet of water, freezes them for a brief period of time. Being hit causes the staff to return to normal, but all magic charges that you’ve collected remain until you continue so it’s easy to stock up. The pots also provide plenty of cake slices to refill your generous reserve of five health points one at a time, with continues being unlimited and tied to checkpoints to keep the action going. 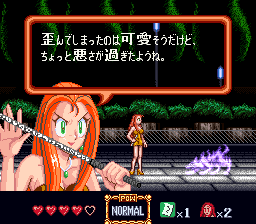 Each level is fairly straightforward with some of the set pieces requiring careful jumping. Mikami’s adventures take her to a variety of haunted locations including shopping malls, mountain ranges, construction sites, and even a gravity-defying dreamland. Each area offers a unique challenge and levels never seem to drag on too long with each one taking just a few minutes. Of particular note are the two auto-scrolling stages, which notably ramp up the difficulty due to their lack of checkpoints: the first requires Mikami, shrunken to the size of a bug, to balance atop a frenzied cat while dodging pipes and fences on rooftops. The second sees her ride a magic broom freely over her neighborhood battling witches and dragons as the sun sets behind her. The latter in particular creates quite an interesting challenge as the gameplay becomes a melee-based shoot-em-up for the entire level, though things can get frustrating quite quickly without any power-ups or talismans in both auto-scrollers due to the waves of tiny enemies flying just out of range.

The final level presents an extremely creative challenge that requires Mikami’s ability to grapple small, candle-bearing platforms with her staff as gravity fluctuates. It’s here that she’s presented with an item that allows her to create these platforms to traverse the open expanse of the area. The grappling technique is sadly underutilized in the majority of the game, however; while hanging, Mikami can either drop down or flip upward with a kick that destroys enemies in a very slick fashion. Unfortunately, the game tends to only use these platforms for making basic jumps that would otherwise be slightly out of reach. As a result, they feel somewhat wasted and cause secrets to become fairly obvious- just look for the conspicuous platform!

The greatest areas of the game are the visuals and audio. Each level includes simple, skippable cutscenes that detail what the Mikami GS Company crew is up to while bridging the action. These scenes require knowledge of Japanese to know what the characters are saying but all of the graphics are presented with vibrant colours and plenty of detail accurate to Shiina’s style. Natsume showed off plenty of neat tricks the Super Famicom is capable of with solid sprites, plenty of transparent ghosts, Mode 7 rotations, and depth of field, but nothing seen here is as daring or technical as the effects in Super Castlevania IV. To GS Mikami’s merit, however, backgrounds include plenty of layers with parallax and animation. Some stages even feature cycling palettes to show the passage of time among other things, including Mikami changing the color of her outfit every level! 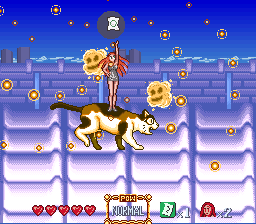 The music was composed by Kinuyo Yamashita (Castlevania, Mega Man X3), who provided plenty of upbeat fusion songs that give the action a smooth, contemporary feeling matching the mood set by the opening theme. There’s never a dull moment with the audio thanks to strong percussion samples, good stereo separation, and plenty of synths combined with clean sound effects (provided by Hiroyuki Iwatsuki) that utilize a mixture of sampling and white noise as well as a scant bit of voice from Mikami herself; those that are critical of Nintendo’s 16-bit sound capabilities could easily change their minds after hearing the excellent work provided by Yamashita and Iwatsuki which lacks much of the nasty reverb that can plague some games on the platform.

Tying everything together is a strong sense of humor with light horror elements true to the series. Many of the enemies have googly eyes or obvious gags such as possessed posters, perverted spirits on trains, Playboy bunnies and more. On the other hand, some of the enemies and bosses can be quite creepy- from decaying hands to living dolls and human-faced butterflies, not every battle is comedic. The action may not seem too difficult, however, as most enemies take one or two hits and bosses can be taken down quickly due to Mikami’s attack speed or any power-ups she acquires along the way. Boss battles can also be a bit similar with almost every boss spawning minions and projectiles while teleporting; thankfully, each boss has plenty of personality and are worth fighting just to see their attacks and special effects.

Despite the casual difficulty and brief length, GS Mikami’s gameplay presents a fun, responsive adventure that can serve as a breath of fresh air for Super Famicom fans. The graphics remain appealing throughout and ooze personality; combined with the fantastic audio and wonderful sense of humor, there’s no doubt that the game is a winner. The fact that this was the only action game for the series is rather disappointing, as Natsume certainly could have kept the ball rolling with more tie-ins that expanded upon the stellar foundation- better use of the grappling mechanic, more exploration elements in the levels, and more intricate cutscenes with authentic Shiina artwork would send the game up to the top.