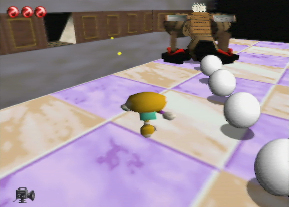 Back in 1997, Nintendo 64 owners didn’t have many platformers to choose from. While the console is recognized as a breeding ground for 3D platformers in retrospect, it took a while for them to actually show up. Most people were plenty happy with Super Mario 64, but those who had their fill would have needed to check out the competition, with the Playstation and Saturn offering games like Jumping Flash and Croc. That is, until Chameleon Twist hit the scene near the end of 1997 courtesy of developer Japan System Supply. Chameleon Twist and its sequel aren’t revolutionary games by any stretch, but they’re fun, breezy platformers that offer some unique ideas and hold up reasonably well today.

The setup for Chameleon Twist is similar to Alice in Wonderland, as the story begins with our chameleon protagonist following a hurrying rabbit (who of course looks very similar to the White Rabbit) into a hole leading to a different world. From there, the goal is to use your new, semi-humanoid form and your massive tongue to navigate through 6 different worlds in order to return home. You can select one of four different chameleons to be your protagonist – Davy (blue), Jack (green), Fred (orange), and Linda (red), but this is purely cosmetic. 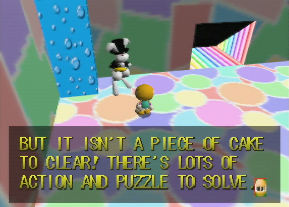 The very heart and soul of Chameleon Twist relies entirely upon the way you can use your character’s tongue to interact with the environments you travel through. By holding the B button and using the control stick, you can move your tongue in any direction within a 360 degree radius. By doing so, you can consume enemies and spit them back out, grab onto poles to cross gaps, and even defend yourself by surrounding your body with your tongue. The game quickly requires more advanced maneuvers, such as using your tongue to perform a pole vault to climb vertically or a technique called the Quick Rotation, in which you spin yourself around a pole to cross certain gaps or scoop up multiple enemies. Mastery of these mechanics is key to enjoying Chameleon Twist, and the game graciously provides a training mode to give you a chance to practice.

Worlds are divided into multiple smaller rooms, each of which provides a specific challenge. Most challenges veer towards navigation problems, where you’ll have to analyze the situation and find a way to use your tongue to make it to the next room. Most conventional platforming is kept simple and most enemies can be eaten, so the game tends to only be challenging when it starts requiring combinations of tongue maneuvers. This is to the game’s benefit, as the player character feels rather floaty when jumping, making it sometimes difficult to gauge landings. The camera is also an absolute mess, frequently getting stuck at weird angles that hinder the player while also limiting their ability to adjust it. 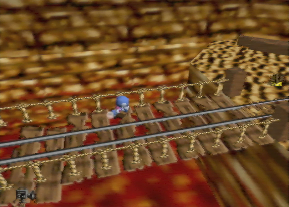 The game also features collectibles to find in each stage in the form of crowns. These crowns are often well hidden and require thorough observation or mastery of the mechanics in a way that the critical path doesn’t typically expect of you. The rewards for collecting the majority of the crowns aren’t particularly exciting, as it’s just a boss rush mode and a billiards minigame in the final world, but for players who want to push their skills further, the journey itself can provide sufficient reward. Chameleon Twist is the kind of game that can easily be gotten through in a sitting or two with minimal stress since players are given lots of health and infinite continues to complete the adventure, but it also encourages replays to explore every last nook and cranny, echoing the design of other classic platformers like Yoshi’s Island.

Each world offers a vastly different biome than the one before it and each one also has its share of unique gimmicks and ideas. The first world, Jungle-Land, serves as a nice and simple tutorial to get players accustomed to the game’s mechanics as it guides them through a linear jungle into a mine. Ant-Land ups the ante by throwing a much greater number of enemies at the player, requiring good use of the quick rotation to get around marching ants and defeat them quickly. Bomb-Land introduces enemies that are meant to be used as explosives to clear out breakable blocks and destroy otherwise invincible foes. The fourth world, the Desert Castle, shakes things up noticeably by taking place in one large platforming sequence with a zoomed out camera, much like the Bowser stages in Super Mario 64. Despite the impression its name might give, Kids-Land is by far the most challenging level in the game, requiring absolute mastery of the quick rotation and other tongue mechanics to get past difficult sequences of moving platforms. The final level, the Ghost Castle, offers a feudal Japan-themed level with some interesting scenarios, such as lighting candles to raise platforms and trapping you in rooms full of haunted silverware.

At the end of every world, you will have to defeat a boss to proceed. The bosses are aesthetically diverse, but they’re almost all defeated in the same way, which is a shame. Bosses will typically summon minions to crowd the arena, which you will then have to eat and spit back at the boss to win. The ones that manage to do something different really stand out though, like how the giant cake boss at the end of Kids-Land is defeated by eating the enemies that operate it from the inside, or how the final boss can only be defeated by consuming the maximum number of projectiles and hitting the boss with them in a single, perfectly accurate volley. 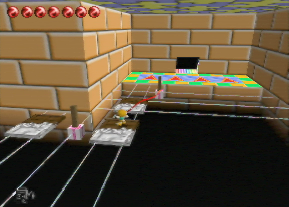 Seeing as how Chameleon Twist is a relatively early Nintendo 64 game, its visual style is rather simplistic in nature. Most environments have bland backgrounds with very limited texture work that doesn’t vary much if at all through the entirety of a given world. The game does make up for it though with an eclectic selection of enemies that incorporate an interesting visual style that looks like a 2D sprite placed onto a 3D model, making them distinct compared to your character or the bosses. Color is effectively used as well, with areas like Kids-Land having an almost dreamlike quality to it and the Ghost Castle being appropriately dark and drab. There are neat visual flourishes elsewhere, such as a parallax scrolling effect implemented during a flying carpet sequence in the Desert Castle and how each boss gets a brief cutscene showing their defeat in different, entertainingly dramatic ways.

The soundtrack to Chameleon Twist is generally limited but consistently upbeat to an infectious degree. Aside from the transition into the mines in Jungle-Land, most stages only feature a single song, which can grate if you get stuck on a certain section for a while. The song used for the Desert Castle is a standout example of fitting the tone, as it incorporates woodwind instrumentation that’s very evocative of the desert theming. A great touch is how every boss has a unique song to accompany them, usually matching their design. For example, Quintella the queen ant, the boss of Ant-Land, is accompanied by a song that nails the tone of being in the presence of royalty as she dances around the stage. 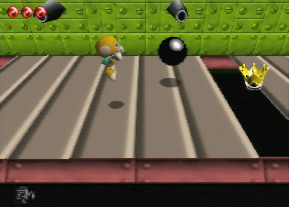 Aside from the main game, there’s also a multiplayer mode that can be played with up to four people. It’s pretty barebones, only offering two modes and four stages per mode, but it’s nonetheless a fitting addition for a game on a console that eventually made its name on multiplayer fun. Survival mode has players fighting to be the last chameleon standing by eating objects around the environment and spitting them at the other players. Time Trial mode has players competing to be the one who remains on a given platform for the longest amount of time, similar to a king of the hill mode in other games. Bizarrely, CPUs are only available in the Japanese version, so international players have to gather friends or family if they want to try it.

Chameleon Twist was initially released in the US on November 30th, 1997, before coming to Europe and Japan a couple of weeks later in December, and the versions have a noticeable amount of differences. The Japanese version has positive changes across the board, which could perhaps lead one to believe that the game was rushed out to market in the US for the holiday season and then brushed up for its Japanese release afterwards. Some of the most significant changes to the Japanese version include the multiplayer power-ups being added to the main game, multiple instances of more complex level design in every world, and even an actual ending showing your escape from the Ghost Castle (the international versions jump right to the credits).

https://tcrf.net/Chameleon_Twist – Details the many changes between versions of the game