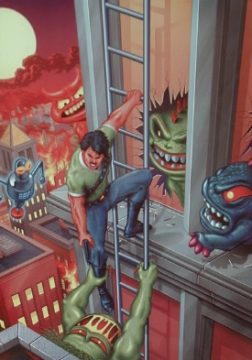 The early ’90s were an interesting time in PC gaming history. Just a few short years prior, the status quo was, for the most part, pretty straightforward: consoles were for gaming, computers were for work. What few games existed for DOS were usually (with notable exceptions, of course) nothing better than substandard arcade clones and frustrating text adventures. While the release of Doom by id Software in 1993 marked a major turning point for the industry, the PC gaming world didn’t go from those few rounds of Tetris on your office computer while the boss wasn’t looking, to the three-hour dial-up internet deathmatches overnight. Before any of this Quake, Duke Nukem 3D or Elder Scrolls business, developers went through a transitional phase as they began to realize just what the PC had to offer.

Less than a year before Doom took the industry by storm and ushered in the FPS craze that shows no sign of dying down two decades later, Apogee Software came out with a comparatively modest 2D sidescroller called Bio Menace (or BM for short, if you have a 12-year-old’s sense of humor). Bio Menace was based on the engine from Keen Dreams, at the time the latest addition to id Software’s landmark Commander Keen series, only with the welcome addition of an augmented color palette. Commander Keen even made a cameo appearance in the game, as seen below. Impressively, everything in the game except for the engine and music was created by the game’s designer, Jim Norwood.

The story goes that a bioterrorist dressed as a metal grim reaper, with help from a run-of-the-mill mad scientist, has created an army of genetically-engineered monsters to ravage all the major cities of the world unless every world power yields to his will. So who does good ol’ Uncle Sam send in to counter this threat? The Army? Air Force? Delta Force? Marines? Of course not! If they got the military involved, they would have to coordinate with generals, form an attack plan, transport hundreds of soldiers… it would just be too much of a hassle. Instead, they go for a much more reasonable strategy and send in a lone CIA operative by the name of Snake Logan. 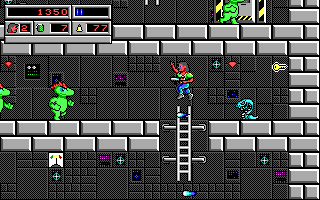 After conveniently getting shot down in the middle of a mutant-infested city creatively named Metro City, your mission is to locate and destroy the labs where these mutants are being created, rescuing hostages along the way. In a break from the standard-protocol “entire story is in the manual” method, the story is actually infused with the game through dialog boxes and sparse cutscenes. There may not be much to the story itself, but for a PC platformer of its time, that’s still impressively ambitious.

The goal of each level is to rescue a hostage locked in a little alcove behind a force field, then exit the level. To do so, you have to find a special color-coded crystal shard to deactivate the force field and rescue the hostage. Every time you do so, you are treated to a delightfully campy dialog sequence with silly music. Along the way, there will be loads of mutants to fry, many of which could almost be mistaken for some obscure Pokémon or perhaps one of the microbes from Doctor Mario. The influence of contemporary Japanese console games on the monster designs makes Bio Menace‘s atmosphere particularly intriguing. While the the majority of Western productions that borrow extensively from Japanese visual styles are only failed attempts at copying that anime look whole-cloth, Bio Menace instead borrows several elements from typical Japanese creature designs and works them into a unique style that is unapologetically American. 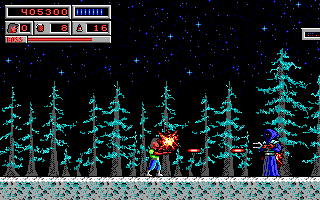 Bio Menace‘s visuals are everything you could want from a game of its nature. They may not have shaken the grounds of what what we expect from a video game, like the aesthetics of games such as Super Metroid or Ocarina of Time, but the look and feel is simply satisfying. In fact, many aspects of this game could easily be describe with that word. Thanks to the Commander Keen engine, it noticeably lacks the infuriating stiffness typical of the era, giving it very satisfying controls. The weapon designs, the sound effects, the monster designs and the death animations all have a very satisfactory charm to them. 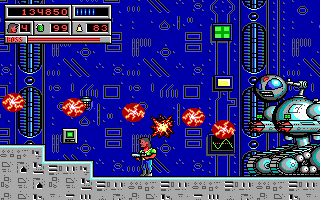 The music, on the other hand, is a bit of a weak point. The soundtrack was composed by Bobby Prince, who would later be known for composing Doom‘s legendary “MIDI metal” soundtrack. But however brilliant a job he might have done at making metal guitar riffs work on crappy ’90s PC sound cards, it seems that whatever he was going for here wasn’t his forte. Bio Menace‘s soundtrack does has some pretty good tracks that legitimately contribute to the atmosphere, but it’s very hit-or-miss. The music ranges from your standard “cheesy, yet catchy” game tunes, to legitimately intimidating mood music, to downright obnoxious noise. Incidentally, due to Bobby Prince’s apparent fondness for Motown basslines, Metro City has some Detroit feeling going on. 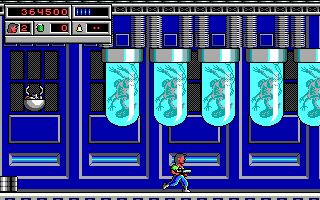 Bio Menace‘s mechanics are straightforward. You’ll be jumping on platforms, collecting objects such health, ammo and extra lives; and, of course, frying mutants. Powerups include temporary invincibility and an energy field that turns you into a green blob, though as cool as that second one sounds, it’s so severely underused that it’s barely even in the game.

You’ll also find keys scattered around the map that will unlock little closets; these usually contain items that do nothing other than up your score, but they’ll occasionally stock extra lives or the crystal shards you need to free hostages or access different areas of the level. There are gems that give you an extra life for every 50 you collect, and secret level gems that let you enter a bonus level where you can find gems and powerups if you find all of them in a given level. One particularly interesting mechanic is these trapdoors full of powerups that can only be opened by entering a precise color sequence, which will be displayed on a wall somewhere in each level. You’ll have to be careful not to make any mistakes, though, because you only have one shot at entering the correct code. 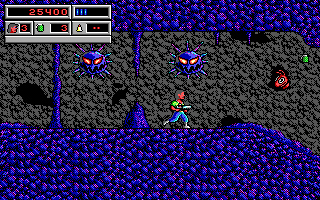 In the weapons department, you have your plasma rifle, which can fire several different types of ammo, and as a side-arm, you have your hand grenades. The weakest ammo you’ll find is the machine gun rounds, but you still have an unlimited, default ammo even when you run out of everything else. The default ammo does the same amount of damage as the machine gun rounds, except it can only fire a burst of one, two or three shots at a time, depending on the difficulty level. After that, you have super bullets, which are essentially the same as the machine gun rounds, only they do five times the damage. The most powerful ammo in the game is single-shot only, but more than makes up for it in damage. In addition to the various types of ammo, there are three types of grenades. You have green grenades, which explode on impact, and red grenades, which explode if they hit a monster, but if you aim for the ground, they’ll slide forward, spitting out fire and doing damage to everything in their path before they explode. Finally, there are land mines you can plant on the ground, which the game counts as a type of grenades. 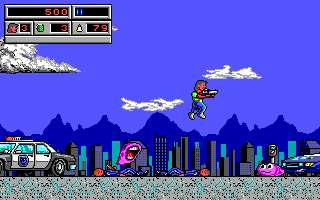 There is one problem with this: The game lets you carry more than one type of ammo or grenades at a time, but there’s no way to switch between them; you’re stuck with whichever type of ammo is considered the “best” until you run out and have to switch to the next level down. This might seem reasonable at first, until you want to throw a grenade over trench or onto a ledge above your head, or even just quickly take out the enemy in front of you, and you happen to have a few land mines on you. You can’t throw a grenade until you’ve used up all your land mines, since they’re clearly superior… right?

But that’s far from being this game’s biggest problem. As mentioned before, Bio Menace handles as smooth as silk. The Commander Keen engine makes actions like shooting in mid-jump a much less frustrating experience than the customary unplayably-stiff controls of most early PC games. Evidently, however, the engine programmers felt the world wasn’t ready for such a smooth PC sidescroller, so they made all the bounding boxes twice the size of the sprites just to hamper the experience. That would be annoying in any game, but Bio Menace cranks it up to the next level by throwing in a couple levels where you have to slip between indestructible robots that instantly kill you on impact and are spaced so closely together that your window of opportunity lasts less than a second. 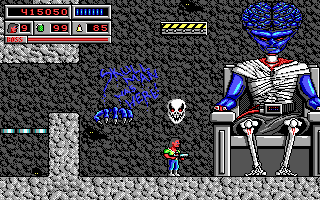 And on that note, it’s worth mentioning that this game is unbearably hard. Some enemies can be incredibly difficult to get near without taking hits, most of the boss fights involve having to dodge and run the moment you have a shot lined up, and several levels contain these slimy little creatures inching along the floors that are near-indestructible, damage you when you step on them, move incredibly slowly and happen to be strategically positioned in hallways where the ceiling is so low, you can’t jump over them. You just have to spend few years waiting for them to move out of the way. Fun, right? And in some of the later levels, you’re forced to make a literal leap of faith and hope you don’t land in an acid pit. They even pull that trick in a couple of bonus levels, for crying out loud! 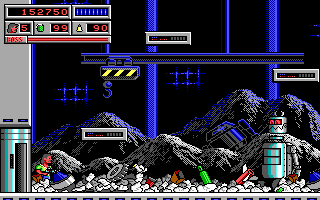 But overall, Bio Menace isn’t too shabby. Sure, it gets frustrating, but it’s at least worth a spin. The mechanics are excellent for the most part, and it has the inimitable charm of a silly ’90s game. Now that Apogee’s officially released it as freeware, it can’t hurt to give it a download.