Founded in 1988, French development studio Delphine International gained worldwide recognition through their two cinematic action games, Out of This World and Flashback. Prior to these successes, they had developed a trilogy of adventure games using their Cinematique engine – Future Wars, Operation Stealth, and Cruise for a Corpse. While these met with some degree of success in Europe, they went largely unnoticed in North America. They are clunky and difficult to play in the modern age, and they suffer from questionable English translations. However, they remain interesting for fans of their more popular games, as they developed by many of the same staff, and some influences can be traced back to them. 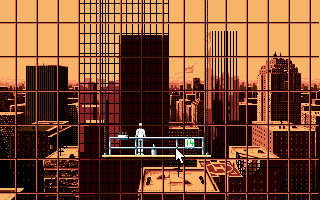 Future Wars begins innocuously enough. As a lowly window washer, your mundane existence soon becomes substantially more exciting as you stumble upon a device that mysteriously transports you back to medieval times. Further exploration reveals some bizarre anachronisms, such as an order of monks who seem to have access to technology which has no place in the middle ages. You soon stumble upon Lear and his beautiful daughter Lo’Ann, who reveal themselves as time travellers from the distant future. In the year 4315, humanity is at war with alien invaders known as the Crughons. Their fight is at a standstill, however, so the Crughons travel back in time to plant bombs and alter the course of human history. With no real way home – and nothing better to do, anyway – you accompany Lo’Ann and aid the human resistance in the fight for the future.

From a technical standpoint, Cinematique is at a mid-point between Sierra’s SCI0 and SCI1 systems. It supports 256 color graphics, although the visual depth isn’t quite on the level of Sierra’s scanned artwork. And while the interface is completely mouse driven, the pathfinding is extremely basic. It also takes the absolute worst design aspects of Sierra’s older games, and somehow exacerbates them. 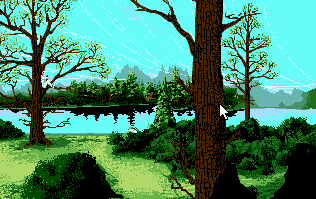 Unlike some other games that share the theme, the time traveling is merely a plot device – there are no puzzles that actually require using it, and progression is quite linear. A good chunk of the puzzles boil down to this – did you happen to grab that one nearly invisible item from three screens back? No? You can’t go back and get it, so time to reload. Not only are vital items nearly impossible to see, but trying to interact with them causes extraordinary amounts of headaches. You often need to be within a few pixels before your character can do something otherwise the game will tell you to move closer. Such taunts are maddening when dealing with dangerous monsters that you need to use an item on. “Go a little closer.” “Go a little closer”. Oops, too close. There are also a few screens, including a climatic dash through a maze, that require precise or quick movements of your character, and it’s too sketchy to ever work properly.

The puzzles that are there are pretty dumb too. Right at the beginning, you’re yelled at by your boss. You go through the window and enter a lobby, with two doors. One door is the boss’ office, the other door you’re supposed to enter, but the game won’t let you. Instead, you’re supposed to pull a prank on your superior by filling your paint bucket with water, then stick it above the boss’ door. When he comes out angry, you’ll automatically run to the other door, and thus into the chamber which holds the time travel device. It’s an terrible opening puzzle, because you’re not given any suggestions at all that you’re supposed to be exacting some kind of juvenile vengeance. 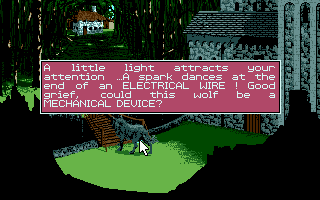 Most of the story is dealt out in chunks during a handful of relatively lengthy cutscenes, although character interaction outside of these segments is minimal. The writing is adequate, with some bits of amusingly awkward humor. Your character repeatedly mishears “Crughons” as “Croutons”. One character wishes you good luck with a Star Wars reference. As a plot point, you’re subjected to a mind implantation which subconsciously gives you necessary information as needed. Right before an arcade sequence, this impromptu education kicks in and acts as a brief tutorial, breaking the forth wall and telling you to use your mouse to shoot enemies, something which Metal Gear auteur Hideo Kojima would be quite proud of. Overall, the plot is serviceable, even though the basic set up is a bit too close to The Terminator.

Regardless of its many issues, Future Wars is still interesting in a historical context. The visuals were done by Eric Chahi, who also masterminded Out of This World. You can see some similarities in the artwork, such as the way the projectile blasts disintegrate their targets, or the gloomy, war-ravaged landscapes. Paul Cuisset also designed most of Delphine’s other games, including Flashback. There are some thematic elements which bear some vague resemblance, like the futuristic train station, or the hibernetic sleep device in one of the spaceships. But otherwise, the fiddly interface has resulted in a game that has aged extremely poorly. 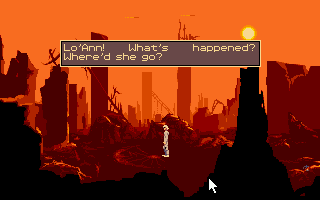 Interplay also published the IBM PC version of Future Wars on CD-ROM. While the disk versions were almost entirely silent, the CD version has redbook audio playing throughout the adventure. It’s cheap early 90s synth, and not in that awesome power rock PC Engine kind of way. As such, it adds nothing of value.