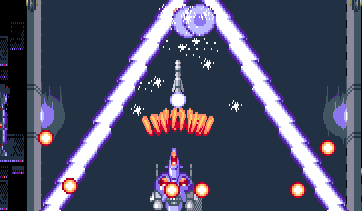 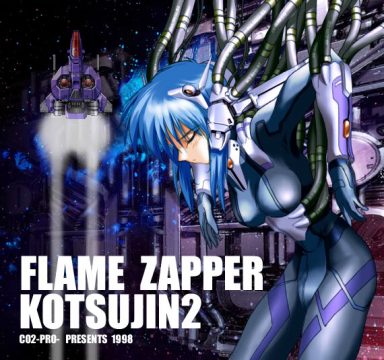 For the most part, NEC’s PC-9801 platform was largely known for strategy games, RPGs and visual novels. While there are numerous shooters and action games, there aren’t very many good ones, as most developers preferred the horsepower of the Sharp X68000. Though Shanghai Alice’s Touhou series began on the PC98, there is one other shooter on the platform that gives those games a run for their money – Flame Zapper Kotsujin, a doujin title developed CO2 Pro, consisting of only two staff members. While CO2 Pro’s previous efforts have been nowhere near as impressive (including the Gradius ripoff Garudius 95), Flame Zapper Kotsujin easily blows away most of the titles on the platform, and can easily stand up next to any of the better arcade or console shooters from the era. 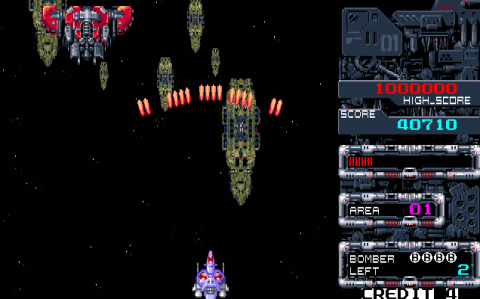 Flame Zapper Kotsujin is a vertical shooter, that, in many ways, resembles a faster paced version of Raiden, though it takes place entirely in outer space rather than mixing it with ground levels. Your armament consists of three colored power-ups, which determine your primary gun, your sub weapon and your bomb attack. 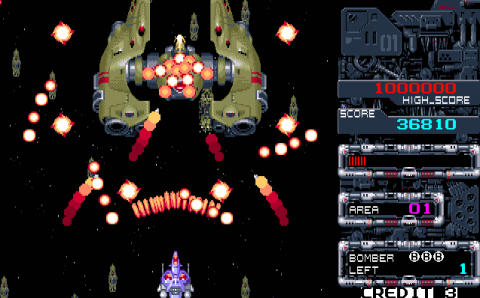 The red weapon is a standard spread shot and default weapon. It does weak damage, but covers most of the screen when powered up to the highest level. The red sub weapon is far more interesting, blasting homing missiles that lock onto enemies and slowly head straight toward them. They do great damage and look really cool. Unfortunately, the second boss (Apocalypse) uses this exact same attack, so it can be confusing which attack belongs to who when fighting it. The red bomb calls in many more skull ships to bomb the place, leaving behind skull-shaped explosions, an obvious influence from Truxton. 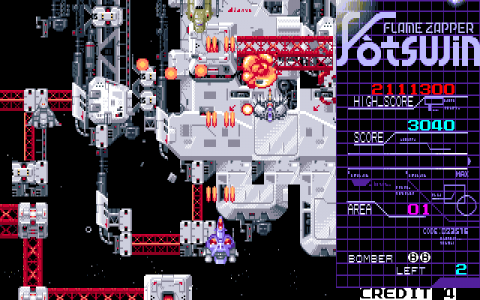 The Yellow weapon is a very powerful, compressed attack in the shape of a crest. Yellow is the power weapon, with it doing the most damage out of all of the normal shots. It makes short work of bosses, but unfortunately does not cover much of the screen. It does, however, shoot through walls and indestructible obstacles. The yellow sub weapon compliments the yellow weapon beautifully. It consists of multiple yellow tentacles that slowly spin around your skull ship and destroy anything that comes near. Enemies try to ram you very often, and since the yellow weapon is not going to hit all of them, the yellow sub weapon will hit the remaining ones. The yellow bomb has a large hand show up on the screen and shoot lightning from the palm. It is very bizarre, looks out of place, but also very powerful. 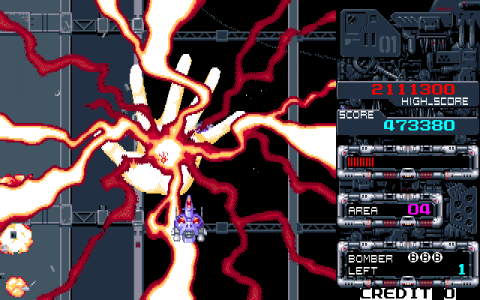 The Purple weapon is a medium powered attach which fires multiple homing lasers. The homing lasers seek out an enemy and hit anything in their way before piercing right through and leaving the screen. The purple sub weapon shoots missiles that fire forward, doing good damage. While the purple weapon and sub weapon may seem underwhelming, the purple bomb is amazing, as it calls in a fleet of ships which cover the screen with lasers. It does lots of damage and lasts a surprisingly long time. 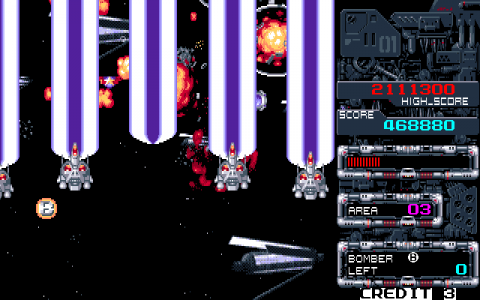 Even with the limitations of the PC98 hardware, Flame Zapper Kotsujin looks and sounds much better than you’d expect. While the graphic design is hardly innovative, the sprites are well designed – for one, the main ship is vaguely shaped like a skull. The music also reflects this, with some damn fine FM synth music. While it looks fantastic in motion, it does have a rather large status bar on the side of the screen, in order to replicate the vertical aspect ratio of many arcade shooters, making the action feel slightly cramped. 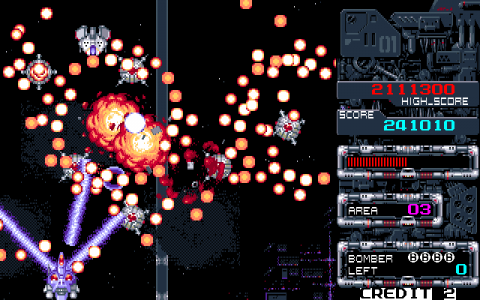 The levels are relatively lengthy, scroll fast, and have a very old-school feel. Sometimes cool things happen that come out of nowhere, like in the first level. Huge lasers are fired near the end. As they get closer and closer, a fancy pseudo-rotation effect is used to show your ship doing an evasive maneuver. Afterwards, a miniboss is shown as the one firing the lasers. All real boss fights begin with a brief introduction stating their name and the level they are the boss of. The game is completely in English, and while the boss names are not necessary to gameplay, it is pretty cool to be able to understand every word of the story, even if it is a generic one. 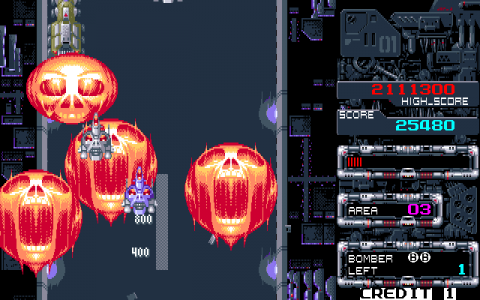 Flame Zapper Kotsujin‘s scoring system involves emblems dropped by enemies after being destroyed. Collecting the emblems makes subsequent emblems worth more points. If an emblem falls off the screen, their point values go back down to the minimum. It’s a lot like the scoring system in Battle Garegga and other Raizing games, but with a few tweaks. Every so often, huge emblems with the letters CO2 on them appear. Collecting these are not only worth more points, but also help make your small emblems worth more points (unless the chain is broken). Additionally, not getting killed at the end of the level gives 2x to all the bonuses, and no bombing adds another 2x. 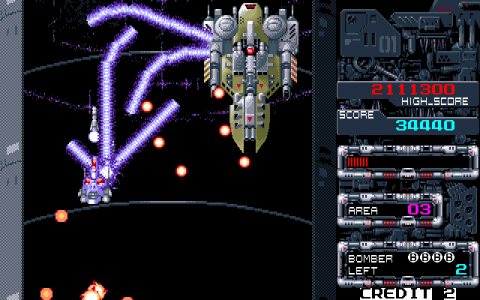 After beating Flame Zapper Kotsujin‘s five levels and bosses, you unlock a new difficulty, Mania. Mania puts your ship at its highest level at all times, but also causes enemies to explode into a burst of bullet fire. Additionally, you can choose which level you start at on the configuration menu. This is a very cool feature that opens up lots of possibilities. Even though you could start at level five and complete the game from there, CO2 Pro was nice enough to start the game with enough credits that even a novice could complete the game on normal mode. 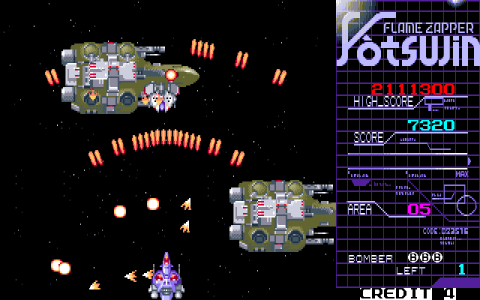 Flame Zapper Kotsujin is everything a good amateur shooter should be. It does a lot using only a little, it provides gameplay and design that puts games with more than three times the budget to shame, and, most importantly, it’s a lot of fun.