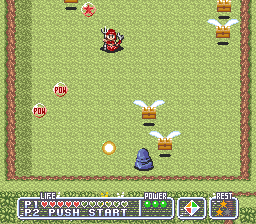 In Firestriker (known as Holy Striker in Japan), the player takes on the role of Slader, the last Firestriker, on his quest to revive three other Firestrikers, defeat the Arch Mage Wylde, and save the Four Kingdoms. This all may sound like the setup for an RPG or adventure game of some sort, but Firestriker is something else entirely. The player moves freely about the screen in a top-down perspective and conducts a spinning attack with the A or B button. The only object in the game that can be hit, however, is a glowing orb called the Trialight. The Trialight is, for all intents and purposes, a pinball, the player a roving flipper, and the various enemies and obstacles in each stage bumpers. Naturally, the player can fail the current level if the Trialight drains through the exit at the bottom of each area. The exit is guarded by the second “flipper” – a mysterious wizard that accompanies Slader and can be moved along the bottom of the screen with the L and R buttons. Much like a foosball goalie, the wizard will automatically hit the Trialight whenever it comes within range. Two-player mode allows a second player to take control of the wizard and gives them the same freedom of movement as the first player.

Unlike a typical pinball game, the goal of Firestriker is to advance the Trialight to the next arena, rather than to accumulate a high score. There is an opening at the top of each arena which the Trialight must pass through, but sometimes this opening is gated. Some gates must be hit repeatedly to open. Others require certain enemies to be defeated, or for a key to be revealed within the arena. 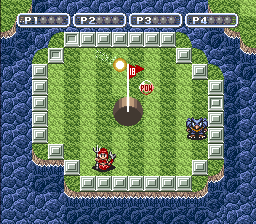 As in any engaging pinball game, there are plenty of obstacles for the Trialight to bounce off of. FIrestriker also has enemies to defeat and blocks to break, which adds a touch of Breakout DNA to the mix. The Trialight tends to do its most satisfying bits of destruction by pinging around in tight spaces, taking out enemies and blocks in its path. Both enemies and blocks will sometimes drop power-ups – which include health restoratives, extra lives, and charges for a super-shot. The super-shot has a maximum of three charges, and can only shoot at a vertical ninety-degree angle. It will take out all of the blocks in its path, and a well-timed super-shot can quite satisfyingly be used to complete some stages in one hit.

Firestriker is fairly short, consisting of five different “zones” on the world map that can be completed in an hour or two. The quest begins in the northeastern Kingdom of Wind, then opens up a bit after the Wind Temple. The player has the option of traveling to the Kingdom of Earth in the northwest, the Kingdom of Fire in the southwest, or the Kingdom of Water in the southeast before ending north at the Arch Mage Wylde’s hideout. The freedom to complete most of the stages in any order is a nice touch. It’s possible to clear out one sector of the map at a time, or to go around and revive all of the other Firestrikers as soon as possible so they all become playable. There is also an advantage to clearing the temples as soon as possible, since each boss drops power-ups that increase the health meter. 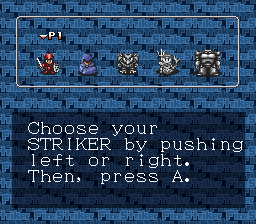 The game credits Jose Shibata and Gonta Ikeda for the graphics, and they did an admirable job of giving each kingdom its own personality. Each area has a distinct set of enemies, blocks, and background tiles which helps to build out the world without the need for dialogue or exposition. The music by MC Noric is mostly the uptempo techno that was typical in the nineties. It makes for fine pinball music, but clashes a bit with the more subdued general art direction.

Physics are an important aspect of any pinball game, and the physics in Firestriker can take some getting used to. In fairness to the game’s programmer, Nori Atsumi, they were trying to make more than just a pinball simulator. It wouldn’t be right to compare Firestriker to a game like Devil’s Crush, but there is some odd behavior that doesn’t hold up against those more traditional simulators. The Trialight will bounce off the front of enemies, as might be expected, but will come shooting straight through if it strikes an enemy in the back. The enemies are then deflected in somewhat unpredictable directions, potentially hitting the player in the process. There is a period of invincibility for enemies after they are hit, but there is no indication of when this period begins or ends. The collision detection can be a bit frustrating as well, particularly in tight spaces where it’s possible to get caught on level geometry. 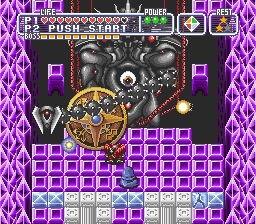 Firestriker also has a multiplayer versus mode that supports up to four players with the Super Multitap. There are two types of matches to choose from: a “soccer” mode and a survival mode. The rules for both modes are simple. The goal of soccer mode is to get the Trialight into the other team’s goal, with the option for players three and four to join players one and two, respectively. Survival mode is a battle royale, with the goal being to avoid falling off of the arena. Versus mode changes the feel of the game with more Pong-like physics and the ability to strike other players. These changes move away from what makes the adventure mode unique, but they feel more intuitive. These two modes aren’t going to convince anyone to trade in their copy of Super Bomberman, but it wouldn’t have been a bad way to spend a weekend in 1994.

This was Japanese developer Axes Art Amuse’s first game after splitting off from publisher Hect, and some impetuousness occasionally shows. There are underdeveloped aspects to the game that have a “throw things against the wall and see what sticks” vibe. Unlocking different Firestrikers and requiring their use in certain stages is an interesting idea, but the way this is executed is strange. Each temple requires the Firestriker from that region to open the gate of the first arena, but the game doesn’t mention that until the wrong striker hits the gate with the Trialight. This is particularly distressing in the Water Temple, where any Firestriker except Loa of Water will slowly drown. There also isn’t much mechanical difference between the Firestrikers besides their movement speed. Earth Firestriker Garum is just frustratingly slow without bringing any discernible advantages to the table. 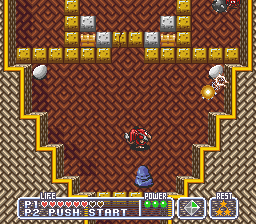 It’s important to collect health power-ups in Firestriker, since the player is more likely to get killed by enemies than for the Trialight to drain through the exit. The problem is that after losing a life, the player’s health only gets restored up to the original six hearts that they start the game with; after using a continue, all health power-ups are discarded entirely. It’s classic Gradius-syndrome, where starting from scratch can seem more appealing than continuing.

Even with all of these flaws, it’s hard not to admire Axes for trying something new. There would have been no way for the developers to know if this game would work until they tried it. Firestriker is more ambitious than something like Pinball Quest, but as it turns out, the randomness inherent to pinball just may not be a good fit for an adventure style game. Firestriker tends to be at its best in fast-paced arenas that are full of enemies and obstacles. It is at its most tedious in empty arenas, where much of the player’s time is spent negotiating with the Trialight to set up the perfect shot. Co-op mode can help alleviate some of these frustrations, but getting the Trialight to go where it needs to go can still feel like an uphill battle. 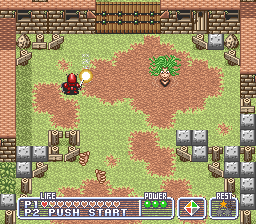 According to the company’s website, the name Axes Art Amuse came from the desire to use computers, descendants of one of humanity’s first tools, the axe, to elevate amusement to art. To that end, Firestriker was a bold first game for Axes Art Amuse. They would get even weirder and wilder with their second game Dream Maze: Kigurumi Daibouken – a first-person dungeon crawler featuring a candy-based economy and the ability to cannibalize dead stuffed-animal parts to make better gear. Axes is still around as of this writing, and it’s encouraging to know that this kind of small, quirky company can make it this long in the game industry.