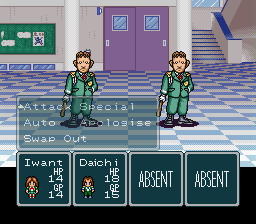 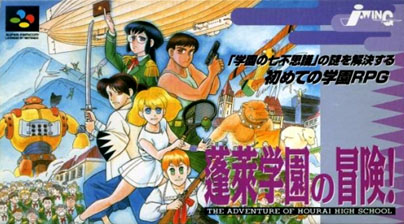 There tons upon tons of unlocalized JRPGs on the Super Famicom. Hourai Gakuen no Bouken! Tenkousei Scramble, the only game developed by a completely unknown studio called Dynamite, is no exception to this sad state of affairs. Published by J-Wing in 1996 to very limited success, it probably wouldn’t have ever caught anybody’s attention if not for Aeon Genesis‘s translation. It was based on a play-by-mail RPG from around the same time. Let’s take a look at this oddity, which even Japanese gamers seem to have somewhat ignored.

After a disclaimer assuring that the game is a work of fiction and that references to actual people or events were purely unintentional, “even when they clearly aren’t”, the opening cutscene begins. You assume the role of a student (whose gender you can choose) still aboard the flight towards the fictional Utsuho Island of Southern Japan, the location of the strangest school of the country: Hourai High School. This huge educational complex, which houses more than one million students and personnel (how is that even possible?), seems to acts as a magnet for weird youngsters and nonsensical events. And you get the privilege of a great start. Indeed, an irritated stewardess decides to send you to your destination via a shortcut… by throwing you out of the plane with a parachute.

After a forced landing through a ceiling, here you are, at Hourai High School. The year hasn’t started yet and teachers already have you in their sights. You’ll get to meet new friends real soon however, particularly the guys behind the school’s newspaper “Hourai Sports”. You’ll even get the chance to take the place of the editor, even though you are the one who sent him to hospital by landing on his head. But the course of your new school year will soon be disrupted by the establishment of extravagantly oppressive school laws, which seem to be manipulated from behind the throne.

Some may compare this game to Earthbound, seeing the delirious scenario and modern setting. They wouldn’t be entirely wrong, as Hourai Gakuen no Bouken, more than its atypical universe, shares with it classical RPG gameplay and first-person battles. The progression is pretty different, though. It’s based on the school campus’s map, with each of its parts constituting “villages” of some sort, and to which the player will be required to come back regularly to use the services housed in the main buildings. The limits of the world map will widen as the chapters that lead us through the school year unfold, and more exotic and less “academic” regions will gradually make their apparition.

Incidentally, the structure of the gaming world saw a switch between on-map enemies and random encounters. And, damn, are you gonna see a lot of those: They just WON’T. STOP. COMING. The encounter rate is very high, in such a way that it’s almost impossible to walk around for more than five seconds without getting assaulted. Which, as every RPG player knows, can get extremely irritating. The battles in question are actually closer to what’s found in the Dragon Quest series, seeing how they’re purely classical. The game’s first hours are very harsh due to a lack of serious defense and unforgiving enemies. However, this initial lack of balance will quickly reverses itself, so much that it will actually invert and the battles will remain very easy for the rest of the game. Indeed, your four-character team will soon be complete, and enemies won’t stand long against your mere standard attacks. The high critical rate, the generosity of experience gain and the huge stock of GPs for spells, added to the fact that leveling up means complete regeneration, doesn’t help in bringing a bit of resistance into these unbalanced challenges. No luck, the game’s battles are too shallow to offer any incentive for strategy to the unphased player.

And such a lack of subtlety is a pity, seeing how the game had some serious content. There are no less than 17 playable characters. “Friend Points” are distributed to unlock personal abilities, and there is a network of school clubs to join and combine in order to learn new spells along battles. However, they’re rarely put to great use in such a battle system that barely requires more than mashing the attack button until victory. Moreover, these additions themselves suffer from a lack of balance. Half of the playable characters will most probably remain untouched for the whole game, and the Friend Points system quickly becomes a minor plus seeing how uninteresting the unlockable special powers are. Joining different clubs can change your abilities, but they still are too messy and confusing to really be exploitable, and it’s also possible to lose your most powerful abilities. Not like you’ll really need them.

However, in spite of these obvious flaws, the gameplay still manages to be interesting. How? Well, with the use of a very peculiar humor distilled through its interface. Be it status effects (instead of traditional paralysis and confusion, we get “embarrassment” and “pheromones”) or spells (in order to “disembarass” the whole team, you can cast “Anime Song”), and not mentioning gears like “Cat Ears” or other items like “Kung-Fu VHS”, everything was relooked to make up for the game’s classical substance. The clubs are equally goofy too. While the basic ones that are centralized in the Club Center are the usual Kendo and Sciences stuff, you’ll also come across hidden clubs scattered across Utusho Island, like the Alchemy club or Girl’s Wrestling club. During battles, where you’ll often face juvenile delinquents and irascible sport teachers, it may also happen that an enemy appears to dodge an attack but ends up getting bashed anyway, which the prompter will comment with a cold “Life sucks.”

That’s what makes this game interesting. While the gameplay is relatively poor, the developers went to great lengths to make the adventure feels like it was straight out of a school-themed anime à la School Rumble or Azumanga Daioh, with an off-the-wall plot packed with funny dialogues and absurd one-liners. The whole universe is completely unique yet thoroughly coherent. To the obvious anime frenzy such as girls in tight gym outfit and the cultural festival with its traditional attractions, the scenario writers added a lot of purely original wackiness, like the three student militias constantly clashing to impose their own order, a failed school trip that ends up on an hostile desert island, and even seven mysterious “Wonders” of Hourai to uncover as a sidequest. It’s true the game isn’t a technical achievement, though, even by 1996 standards. The visuals are pretty archaic, even if the extraordinarily detailed battle sprites kinda make it up for it. The soundtrack is pretty cool, too. It was composed by Hitoshi Sakimoto (of Ogre Battle and Final Fantasy Tactics fame) and fits the game really well, especially that techno boss battle theme. You will have no problem enjoying the world of Hourai to its full extent.

Let’s face it: Hourai Gakuen no Bouken! feels a bit empty. It’s not a bad game for all that, but its serious lack of balance renders its gameplay uneventful. However, it’s clear the game’s point is its crazy anime-like universe, and those who may be curious enough certainly will want a taste of it.