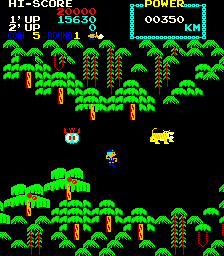 SNK’s 1981 arcade game Fantasy is a story of ridiculously escalating circumstances. Upon beginning a new game, you’re presented with a wide shot of an island, with two tiny figures – a man and a woman named Tom and Cheri – a mountain, and a house. “How are you?” the man asks, in synthesized vocals. “I’m fine, thank you!” the lady responds. Then, a pirate ship just rides right up by, kidnaps the girl (who warbles a hilarious scream) and saunters back off. Our hero, who has watched this happen completely motionless, finally reacts by running behind the house, hopping in a hot air balloon, and begins a quest to save his beloved.

Said quest takes over the course of eight levels, each alternating between a “chase” and a “rescue” stage, and changing both perspectives and method of transportation each time. In the first stage, your goal is to make it past the pirate ship’s cannons and land on its stern. In the second, you charge into the ship to make it past its crewmen and rescue Cheri. Since Fantasy uses only a joystick, without any buttons on the cabinet, it controls rather unusually, in that the hero swipes his weapon automatically whenever he’s moving horizontally. So, you need to position yourself carefully in order to attack enemies safely. 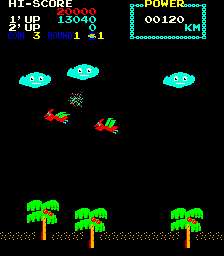 So once you’ve broken Cheri out of her cell, wouldn’t you know it, a bird swipes in from outta nowhere and carts her off the screen. Darn it! In the third stage, you’re back in the balloon, but here you’re flying over the jungle, and need to dodge enemies until you travel the goal over 3000 km (or about 1850 miles – Fantasy‘s sense of scale is a little off). The pterodactyls here fly diagonally, but they also move predictably, so they’re fairly easy to dodge. You’re also attacked by apes on the ground, who toss coconuts directly upwards at you. Sometimes they biff their throw, though, and instead of traveling all the way up the screen, gravity takes its toll and it heads right back down, smacking them on the head. Sometimes they’ll even hit other enemies! The bad guys of Fantasy have it so out for our hero that they’ll happily throw each other under the bus to succeed.

Anyway, what’s interesting here is that while the level resets every time you die, the distance counter doesn’t, so you’re always making progress towards the end of the stage even if it seems like you’re starting from scratch. All of the other chase sequences work the same way too.

In the next stage, you need to scale a set of trees to reach the top, where the bird’s nest is located. This is probably the simplest stage, because there are no real obstacles, just some squirrels and baboons you need to dodge. However, you can’t attack on this level, and can’t jump at all, so avoiding enemies is a matter of retreating until the threat has passed.

Once you save Cheri here, once again she’s kidnapped almost immediately, and so you careen on foot across the jungle at high speed. Amusingly, the developers didn’t change the distance units on the status bar, so you’re moving roughly 10 km/per second. Here you need to dodge tigers, as well as some other type of mystery animal -the flyer refers to these as “natives”, but they’re really just blue heads with gigantic eyes and stubby limbs, which may as well just be an obscure racial stereotype that only the graphic artist was aware of. Anyway, these guys hide in the trees and then tosses itself at you, though you can see their eyes pop out before they attack. The rescue stage after this resembles the second level back in the ship, except you need to attack some tribesmen, who have tied the heroine up onto a stake. 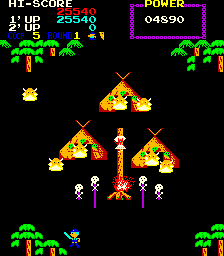 And yes, once your ladyfriend is saved, she’s carted off, again. In the seventh level, you’re flying over the sea again, simply airplanes. This stage is pretty tough, because they move pretty erratically. The final level takes place on London Bridge, with Cheri kept below by the river. In order for the bridge to open, you need to trick its cannons into hitting enough enemy helicopters, after which you can descend and save Cheri. After getting nabbed on four separate occasions, this is finally the end of the couple’s troubles, and they share a happy moment (and more spoken, synthesized words) in the balloon, in a rare case of an actual ending screen in an early 1980s arcade game. Then the game loops.

Fantasy really is a stunning game for a title of its era. Not only does its eight stages give a tremendous amount of variety, but its simple visuals have loads of personality – note the rather goofy looking faces on the clouds, for example. Its synthesized voices are sparse but used hilariously – beyond Cheri’s yells, the groans of the ape’s self-inflicted wounds are painfully amusing. The music is simple, though the jungle chase stage uses a ripoff of the main melody of Lipps Inc’s famous song “Funkytown”. The game alleviates frustration as you can actually continue after running out of lives, which is one of the first arcade games to allow this feature. Altogether it’s a brilliantly weird experience. 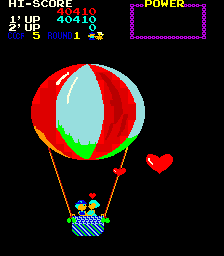 Fantasy was developed and distributed by SNK in Japan, while Rock-Ola handled its distribution in North America. Outside of some text, these games are identical (even the voices are still in English). There’s also an addition ROM set in MAME, dubbed “World” and with German text, which has a much different, much harder version of the second here. Not only is the layout more slightly more complex, but in this version you don’t have a weapon. Since the doors won’t open up until you defeat all of the enemies on a side, you instead need to lure them to get shot by the cannons, a mechanic which otherwise doesn’t show up until the final level. 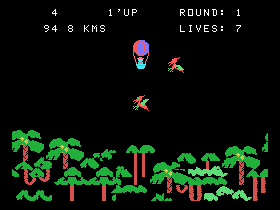 The game was scheduled to be ported to the Texas Instruments TI-99/4A computer, and while it was never officially released, a prototype is available out in the wild. The graphics are a little simplified, but beyond making concessions to the level designs to accommodate the horizontal orientation of a television screen, it’s a pretty decent job. Otherwise, the title was a mostly forgotten part of SNK’s arcade history, until it popped up on the SNK 40th Anniversary Collection, released in 2018, which is a straight emulation. This is downloadable on the Switch version, and requires a free internet patch to play. The MAME version has bugged sound for this game, playing incorrect effects in later levels, which is corrected in this compilation. 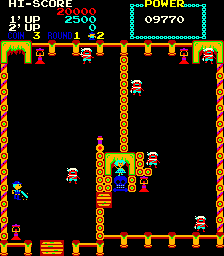 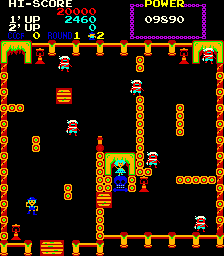 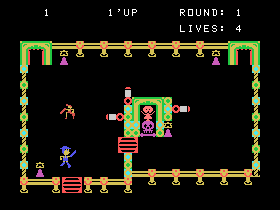