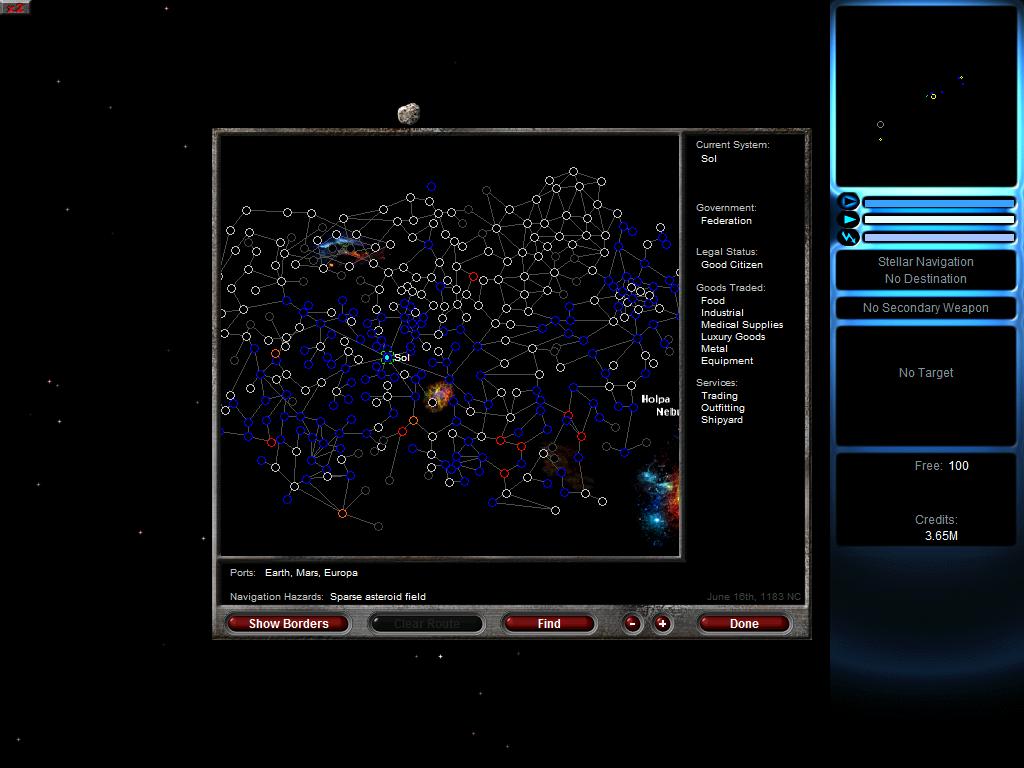 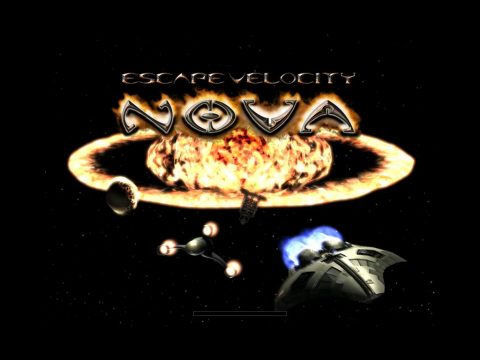 Escape Velocity: Nova is the latest installment into the Escape Velocity series. This installment is very unique in several ways. First off, it uses a different plug-in technology than Classic Mac OS, which helped allow the game to be ported to Windows (this port did not occur until around 2003, however). In addition, they included the first two games as plug-ins so that Windows users could enjoy all three games for the first time. Second, it is the first EV game (much the disappointment of many fans) to limit the player to one major story string for a pilot. So, if you played the Federation string, and then wanted to play the Rebel string, you had to create an entirely new game and start from scratch. This was especially annoying since you couldn’t even take missions for planets you were friendly with if you have already started one of primary government’s mission strings. The game also uses better sprites, rendered in such a way as to make them look 3D (though this isn’t entirely new, as certain plug-ins for the original EV and EV:O have been using this technique for a while).

The game takes place far into the future passed the original EV. At some point, mankind develops “hypergates” which allow for instant travel between planets and systems. A terrorist attack destroys this system, leave humans isolated for a period of time. The game starts at a time when lightspeed travel was becoming mainstream again. As with the first two games, you are a pilot with a simple shuttle, setting out to make your fortune in this new and exciting galaxy.

The game’s universe is a little bigger than EV:O‘s, but with a far more complex plot. In EV:O, the war between the UE and the Voinians was the main focus of the game. In EV:N, this focus is lifted across the six primary governments. While very deep, the depth required to bring the player into the story lines killed off a bit of the open-endedness of the game. This forced story is the main reason why many consider EV:N a step back (albeit a small one) in the series. If Ambrosia ends up making a fourth Escape Velocity game, hopefully they’ll take a step back and reinvestigate this setback. Still being able to play all three games (via plug-ins) on Windows is one of the big draws to the game. Unfortunately there are some bugs with the plug-ins, allowing you to jump from the EV and EV:O universes into the EV:N universes. Hopefully these have been fixed through updated patches. 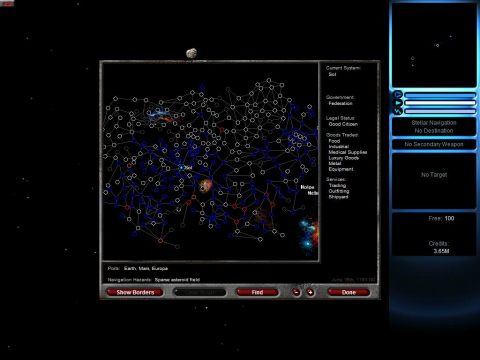 At the moment, there are currently no announced plans from Ambrosia for a new Escape Velocity game, or even a online MMO version (which the fan base has been begging for). However, they also said for a while there would be no third Escape Velocity game (Nova) and that Escape Velocity would never come out for Windows (again, Nova), so it’s really anyone’s guess if there is a future for the series. However, with epic replay value, a lively mod community, and the game world now being open to Windows users (a 30-day limited demo is available at the published web page), this series could very well survive for a long while without a fourth installment. Since playing it, Escape Velocity has become my personal basis for comparison for all sandbox space exploration games, and so far, nothing has really stacked up to it.