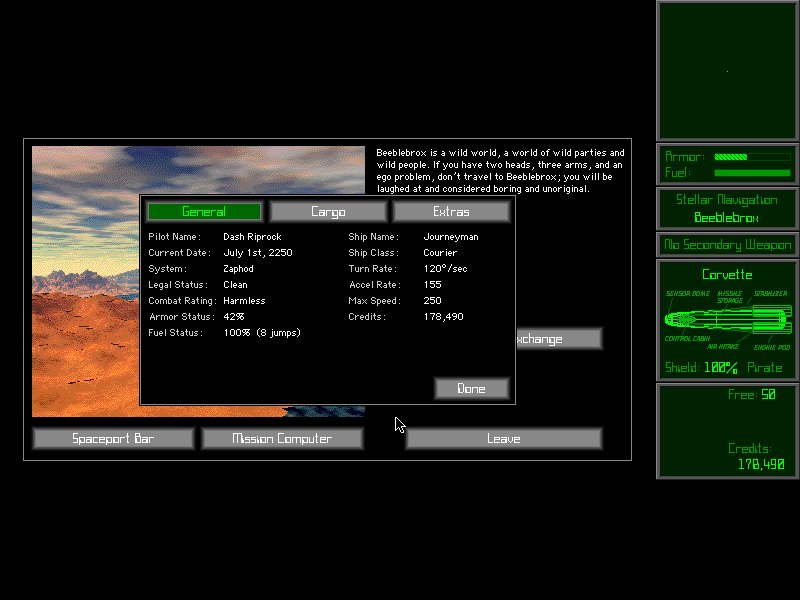 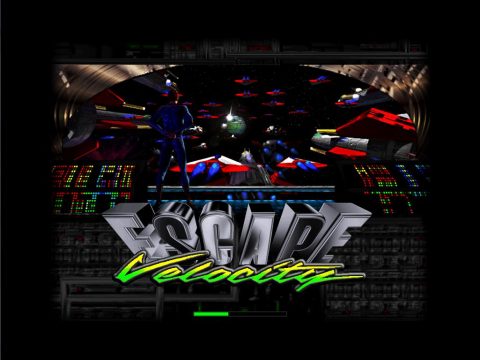 Escape Velocity (or “EV” for short) is a sandbox-style game where the entire universe is open for your exploration, and it’s up to you to carve out a living. In fact, it’s pretty obviously inspired by the classic space trading sim Elite, although it’s modernized quite a bit. As such, it bears a bit more resemblance to Origin’s (also Elite inspired) Wing Commander: Privateer, though on a much greater scale, and replacing the first person dogfights with much quicker, overhead battles.

The story takes place in the year 2246, and mankind has expanded to colonize many star systems surrounding the Earth. You are a guy who has saved a little bit of money working on freighter starships, and you now have enough money to buy a small shuttle with 10,000 credits (the in-game monetary unit) leftover. From there, you can start out to make your fortune by delivering goods, trading commodities, or taking special missions. As you get more money, you can buy larger ships, allowing you to take more dangerous missions, or trade more goods.

There are various plot points in EV depending on what systems you land on and what missions you take. However, the primary back story of the game is that when mankind started exploring space, they came into contact with an alien race. This alien race just happened to be hostile, and a large war was fought between the humans and the aliens. Eventually, the human planets banded together to form a powerful confederation, one large enough to destroy the alien race. However, after the war ended, the Confederation refused to give up power, and started to enslave the outer rim planets. These planets rebelled, throwing you into the following galactic political situation: Confederation VS Rebellion. While this plot setting isn’t exactly original, it is more than enough to set an exciting tone for the game. The game’s setting is also made more interesting in that each planet has its own small backstory, one that reflects the commodities and missions you can get on the planet. 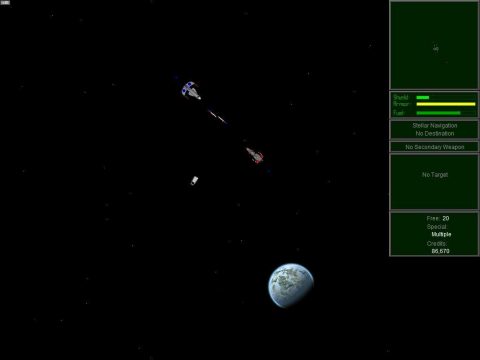 The game is viewed from a 2D overhead perspective, and the interface allows for much quicker movement than Elite. The graphics are rather sparse and a bit on the small side (you will definitely need to click on the screens on the right to get a full view.) You can move around freely in each star system without using fuel, but if you wish to jump into an adjacent system, there is a fuel cost. You also are not allowed to jump out of a system if you are too close to the system’s center and it’s a populated system. When you land on a planet or space station within a system, you have a variety of options, including buying and selling commodities, taking up new missions, refueling your ship, buying enhancements for your ship (or entirely new ships, if you have the cash), and checking out the spaceport bar, where sometimes you are approached for the special plot driven missions. As you advance in the game, you sometimes get more difficult missions, and as your reputation gets more dangerous (by fighting and destroying larger and larger ships), you will also get deadlier missions. The best way to do this (without damaging your status with by attacking peaceful ships in a government’s star system), is to attack the various pirates you’ll usually find in uninhabited systems.

The battle system in the game is pretty simplistic, but very fast paced and engaging. You could jump into a system and be attacked by several ships, with only few seconds (thankfully, if someone is hostile towards you an alarm goes off) to prepare and make the decision to fight or flee. Obviously in the beginning, running headlong into a fight is usually a poor choice. However, from fighting, there is always a chance that you could capture enemy ships, and add them to your fleet. Because battles (like flying) are held in real time and can start and end in the blink of an eye, the excitement in battles never wears down.

The beauty of the game is that you do not have to go down the “most-powerful-fleet-ever” option for playing the game. You can also choose to simply become a trader, trading goods and building an escort fleet of courier ships and freighters. You can become a pirate in a tiny starfighter and terrorize said freighters. Or, by siding with the Confederation or Rebellion (which happens when your legal status with the two governments goes up and down respectively), you can take missions from each of them to destroy the other side. Obviously taking and succeeding in these missions will cause you to further go towards one side, though some missions can do nothing but improve your reputation with a government (delivering vaccines to plaque stricken planets), or do nothing but hurt your reputation (escorting criminals to pirate planets for safe haven). 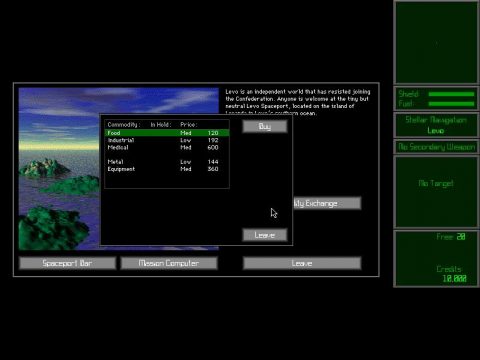 This is just scratching the surface of the game. You can also hire escorts (done from the Spaceport Bar) to either help you carry more commodities around (and thus make a better profit), or to help you fight against your enemies. Also, when your combat rating reaches the very top, you can “conquer” planets: assuming you can defeat their usually insane defense force. In addition, commodities you trade can suddenly shoot up and down in price for a few days leaving you to quickly take advantage of the situation.

This game typically forces one to suffer through the, “just one more turn”, syndrome, as Civilization players can attest to. That is, you could be playing the game, it’s time to “go to bed/work on paper/go to work”, etc, and you’ll be thinking to yourself, “You know, I can afford that Argosy in another 50k, I’ll just do a few more deliveries”, or “Hey, there is a surplus of food on this planet which is setting its price to near nothing. I better take advantage of this…”. Thus, a one hour session of the game could easily turn into many more hours if you aren’t careful.

Escape Velocity also has enormous replay value. Even if you’ve done every Rebel mission, you can still start a new game over and do the Confederate missions. There are also other special mission strings that can be done for other planets as well. Also, if you are feeling zealous, you can play “strict play” mode, which means that if you die, you cannot re-open your pilot file to continue from the last planet you landed on, which usually happens if you die. You get one life, and if you lose it, that’s it. Generally, not even the most hardcore EV players are brave enough to venture into this mode of the game.

In addition, after you’ve beaten and played every mission in the game, EV features a very unique plug-in system (which uses a specific Mac OS feature known as a “resource fork”, making it the primary reason the game couldn’t be ported to Windows), in which fans can modify and create their own universes, with their own missions, their own plots, their own ships, and essentially create brand new games, with relative ease.

EV is the kind of game in which you could tell it was made by people who love playing games. There are tons various geek references to Star Wars, Star Trek and the LOADS of references to Mystery Science Theater 3000 (Here is a screenshot for a veritable torrent of Douglas Adams allusions, featuring planet Beeblebrox of the Zaphod system, and your combat rating can be classified as “harmless” or “mostly harmless”). The game is made to be very open ended, and a lot of fun, no matter how you want play to play it. It is this expansive format that was taken to new heights when Ambrosia created the game’s much revered sequel.