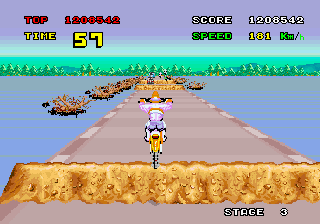 Released in 1986, Yu Suzuki’s follow up to Hang-On is… well, it’s “Hang-On on dirt bikes”. Enduro Racer uses the same underlying technology as the super scaler motorcycle racing game, just making some enhancements and tweaks to provide a sort-of sequel.

The most prominent upgrade is that the roads now dip upwards and downwards, giving some more versatility to the flat courses of Hang-On. Additionally, you can also perform wheelies by holding backwards (or tilting backwards, if you’re lucky enough to play on a ride-on cabinet). This increases your speed slightly, at the expense of maneuverability.

Wheelies become extremely important due to the numerous jump ramps strewn throughout the courses. If you pop a wheelie and hit them at high speed, you can go flying into the air, gaining an even more impressive speed boost. The downside is that you have to remember to tilt forwards (lest you tumble when you hit the ground), and that you absolutely can’t move at all once you take to the air. As such, you really need to be careful at when and where you take your jumps, otherwise you’ll shoot off into a cluster of trees. There’s also bits of debris littered generously over the roads, which makes everything even more dangerous.

Most of Yu Suzuki’s games have been ported to subsequent platforms, while Enduro Racer has not. It gave them some credibility that they were still playable as home games, even when separated from the ride-on cabinets or other gimmicks. The reason Enduro Racer is so widely overlooked is probably because the game actively punishes you for its most rewarding mechanic. It’s very difficult to play a game about dirt bikes and not want to fly into the air at every opportunity, because even in the low-tech mid-80s super scaler 2D sprite kinda way, it’s a lot of fun. But it’s also very difficult to do this without constantly crashing. As with Sega’s other racing games, like (of course) Hang-On and OutRun, the tight time limit only tolerates one or two screw-ups before it becomes impossible to cross the checkpoint, ultimately making the game more frustrating than fun.

The rest of the change-ups from Hang-On are minimal. There are only five sections of a single course. A few areas have water on the side of tracks, causing you to sink if you veer off too far, though you’re still respawned to the track, just as if you’d crashed. The music is catchy, though not Sega’s best.

The game does have an amusingly long-winded, overtly romantic text scroll at the end, though:

“Enduro” is a symbolic journey through life via the media of a race. The results are insignificant and what really counts is competing. Of particular importance are the lessons to be learned concerning one’s self from the various encounters you experience along the way. There is no victor or loser in this test of endurance the only thing that really matters is that you make a commitment to begin the long and trying trek. This game is then dedicated to all of the “Life Riders” who have stated out on the solitary trip to find their own individual limits. Last but not least, may we sincerely congratulate you on a perfect run.

Of the European computer ports, the best is the Atari ST version. Though the redrawn graphics aren’t quite as nice, and the scaling is quite choppy, it still maintains a sense of speed and is quite playable, plus the music is decent. The Commodore 64 version, on the other hand, is far too sluggish to enjoy, and doesn’t look all that pretty either. The way this version handles slopes is simply to move the motorcycle sprite slightly up or down on the screen. The music is pretty similar to the Atari ST release, at least.

The Amstrad and ZX Spectrum versions are essentially identical, outside of some color differences. They’re still about as slow as the Commodore 64 version, though while the graphics are low color, they are more detailed. However, when driving over slopes, the view actually pans the whole screen downward, which looks quite cool. But otherwise, neither of these versions are particularly playable either, and they’re missing music.

While most Sega arcade titles were ported to the Amiga, Enduro Racer wasn’t one of them, which is odd. Evidence points to one being in the works, but was cancelled. 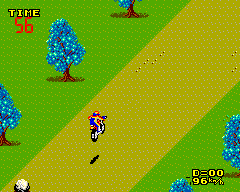 Enduro Racer was also released for the Sega Master System, though it’s hard to really call it a port. While the company prided themselves in offering consolized, scaled-back conversions of its arcade games, they didn’t really bother with trying to emulate the 3D gameplay of the arcade game, so instead they created a totally different game.

The biggest change ditching the 3D viewpoint for an isometric perspective. There are ten races in total, making it longer than the arcade game. Additionally, after each race, you’re awarded points based on how many cars you’ve passed. These can be used to purchase bike upgrades, like an engine boost for a higher top speed, or suspension so you don’t lose speed after hitting ramps. However, you only gain the upgrade for a single stage, and you lose it if you crash. Additionally, your bike gets damaged every time you hit something, and can only be repaired to purchasing the nebulous “Item” in the store, which strangely repairs your bike by a randomly determined amount. Despite its quirks, the upgrade system does add quite a bit of depth compared to other racing games of the era. 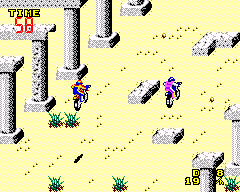 Unfortunately the game still suffers from other issues. It’s strange that, for a game about dirt bikes, most of the time you should be avoiding ramps, because they only serve to slow you down. Technically if you pop a wheelie right before hitting a ramp, you’ll fly slightly farther, though it only barely makes a difference. However, hitting ramps is also advantageous in a small number of circumstances, when they help you jump over obstacles. The problem is that you can’t separate a good jump from a bad jump until you’ve already hit it, since you don’t get a far enough view ahead. The result is that the only real way to succeed is to memorize the courses, and ultimately the game isn’t fun enough to demand this type of devotion.

There are also significant localization differences. The Japanese ROM is 256k in size while all of the other releases are 128k. The smaller sizes means that roughly half the content has been cut. There are ten unique courses in the Japanese version, and while there are technically also ten tracks in the other versions, there are really only five total, that you have to play them twice. It’s missing the post-game map that charts your progress, as well as the dirt bike image on the title screen. (The same issue haunted the American release of Captain Silver, though not the European one.) The cut version was also released in Brazil under the name Super Cross. The Sega Master System version was released on the Wii Virtual Console in 2008, but not the arcade version. 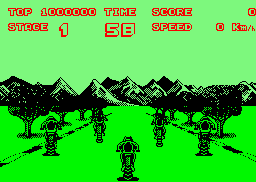 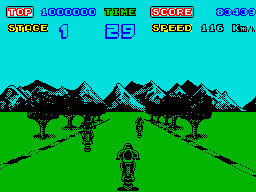 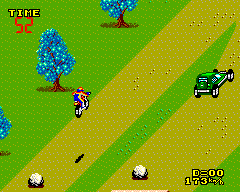