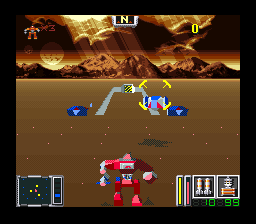 The partnership between Nintendo and Argonaut ultimately created three games – X, Star Fox, and Stunt Race FX (with the fourth being the canceled Star Fox 2). However, in 1994, there was another SNES title, developed solely by Argonaut and published by Electro Brain, called Vortex. One look at it and you can see the relationship between their other games – it’s also fully 3D and uses the Super FX chip, though it features a transforming mecha rather than a spaceship or a race car. It tends to be forgotten when discussing 16-bit polygonal games, though for good reason. 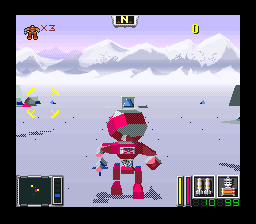 In Vortex, you control a mecha called the “Morphing Battle System” as you invade seven stages in order to save the Aki-Do system from invading forces. The robot takes on four different forms, each with different weapons and abilities. Most of the time you’ll be in the upright Walker mode, which is armed with a cannon, a laser, and two types of missiles. The other transformations include the Sonic Jet, which lets you zoom through the sky; the Land Burner, basically an armored car; and the Hard Shell, which basically turns your mecha into a turtle and absorbs damage, while limiting your attacks to bombs. You have two gauges to keep track of – your shields and your energy – and if either drain completely, you’ll explode. The Sonic Jet in particular gulps up huge amounts of energy, so you can’t even really use it all that often. The Hard Shell will drain energy instead of shields if it takes damage, but if you manage to find somewhere safe, it will regenerate by absorbing solar energy.

You can cycle through the four forms by hitting the Select button, though this takes time and leaves you vulnerable to damage. Instead, you can quickly shift by holding down the L button and hitting one of the four face buttons. The Walker form has additional weapons, which are changed through by holding the R button and pressing either of the two fire buttons. It’s a little much to handle, but if you practice and memorize, you can get it all down. 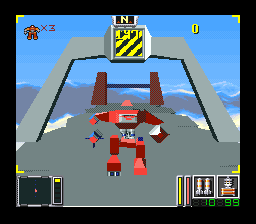 There are other control quirks, however, that are less forgivable. For example, the B button, one of the most commonly used buttons on the SNES, performs a 180- degree turn, which isn’t something you need to do regularly. You don’t just push forward or backward to move, as instead you switch between different speeds (or go in reverse), which makes your robot rather hard to maneuver. Combine that with the low frame rate, sluggish movement, and awkward digital controls, and even doing basic things in Vortex is vexing.

In terms of gameplay, there are a few different types of goals across the levels. The first (and sixth) take place in the eponymous Vortex, which is an expansive tunnel through outer space. These stages most closely resemble rail shooters like Star Fox, though technically you’re not bound to any track, as you can turn around and fly where you want. You’re just constrained by the sides (and plus, there’s no reason to fly anywhere but forward). However, if you try to play it like Star Fox, you won’t get very far. The first boss, for example, has attacks that are basically impossible to dodge, no matter how hard you try. Instead, you’re supposed to transform into the Hard Shell to absorb these hits, then turn back into an offensive form while it retreats. This encounter is just way too hard for something so early in the game. 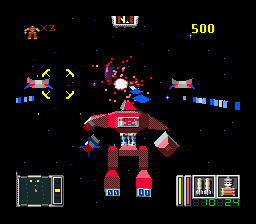 Levels 2, 4, and 5 are open-ended, requiring you to hunt down various keys and doors or find certain items. There’s a map you can access in the pause menu which roughly indicates your goal via blinking dots, though you might still need to explore a bit to find certain things. Other than enemies, who have a nasty habit of attacking from off-camera, you’ll also need to watch out for traps on the ground.

Elevators help provide shortcuts, as they take you to underground sections that will transport you to another part of the stage. For these areas, the viewpoint switches to the first- person perspective. However, one of the main obstacles in these areas are gates with beams that raise and lower, requiring you to zoom quickly through so you don’t get whacked. Given how sluggish your robot is, this proves to be a consistent problem.

Levels 3 and 7 are linear stages, which consist of pathways floating over empty space. The goal here is simply to follow the trail to the end, but that’s much easier said than done, as there are plenty of gaps that you either need to jump or fly over. It’s nearly impossible to gauge the distances of your jumps too, since you travel an extraordinary distance, so you just need to guess. In these areas, it’s also super easy to careen right off the edge and be killed immediately.
Regardless of the stage, you’ll probably find yourself dying a whole lot in Vortex. It’s brutally difficult, especially the boss fights, and without any in-level checkpoints, it quickly becomes a drag. At least there’s a password system that lets you pick up where you left off, as well as some cheat codes. 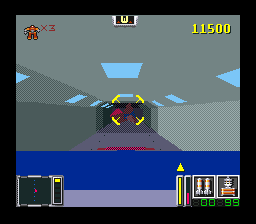 In Argonaut’s previous console games, they handled the programming work while Nintendo did the actual design – in other words, the parts of the game that actually make it fun. Vortex is just Argonaut all on their own, and it’s easily apparent where Nintendo’s influence is missing. It simply tries to do way, way too much, and is further hindered by hardware that can barely handle it.
Fans of this sort of low-polygon aesthetic will definitely enjoy this game for that alone. Again though, without Nintendo’s guiding hand, there’s nothing remotely resembling interesting characters or personality. The only aspect handled well is the incredibly catchy soundtrack, which is probably the lone instance of the SNES attempting to reproduce a Commodore 64-style soundtrack.

Contemporary reviews were mixed on Vortex, compared to the near unanimous praise given to Star Fox and Stunt Race FX. Those games haven’t exactly aged well, but Vortex comes off as being much worse. Still, it’s hard to hate on something that tries so hard and just flounders, and there’s truly nothing else like it on the SNES.