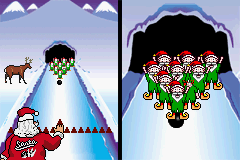 In the ancient times past of 1998, Macromedia Flash was just beginning to come into use, far from the ubiquitious source of time-wasting we know it as now. You could watch short clips from South Park, play some intern’s best attempt at recreating games like Defender, and other than that, you didn’t have a lot of options. There was, however, a game by the name of Elf Bowling. Then name alone gives away pretty much what the entire game is about, and the funniest joke the game has to offer is a joke about Vanilla Ice. Overall, not a good game, but perfectly acceptable for a Flash game from 1998.

So of course, it was a great idea to port the game and one of its saddeningly high number of sequels to the Game Boy Advance, seven years later. The cartridge contains the original game, as well as its sequel, both of which are generally so awful that having two games makes the total product twice as bad. These were originally Flash games, and absolutely no effort has been taken to expand on the concept, as already limited as it is. This sort of thing might be acceptable when you’re stuck in a school computer lab and bored out of your mind, but for a retail release, it’s pretty much unacceptable. 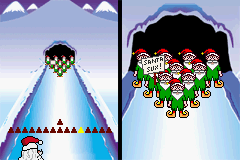 In the original Elf Bowling, you take the role of Santa, somewhere on a bowling lane on the North Pole. Instead of striking pins, however, you’re faced with a row of Christmas elves, who constantly throw insults at you while you play. The bowling is as simple as watching the arrow on the lane move back and forth, and then hitting the A button once you’re ready to throw. There’s always one specific spot, just to the left or right of the arrow in the very middle, and if you can manage to hit that, you’ll get a strike every time. That’s pretty much about all you do, as there’s nothing like angle or positioning to worry about. You don’t even get an opponent to play against, so all the challenge is seeing how high you can get your score.

Elf Bowling 2: Elves in Paradise is based off of shuffledeck, which in fairness, isn’t something you see represented in video games terribly often. In this game, Santa has to grab an elf by his so lovingly rendered thong, move left or right on the deck to get into position, and then hit the A button when the power meter cycles where you want it. Assuming your elf doesn’t fall off into the gutter or off the deck, where they’ll be devoured by sharks, he’ll eventually stop, hopefully into one of the score zones at the end of the lane. This time, however, you’re playing against an opponent, a blue Santa by the name of Dingle. He’s pretty much awful, however, and if you have any sense of timing in the slightest, you can beat him by several thousand points. Or, you can play against a second human, if you have somebody somebody you know and you want them to know you secretly hate them.

That’s pretty much all the game has to offer when it comes to gameplay. It’s also painfully unfunny, and it’s the sort of thing you’d better hope you have muted, should you actually play this on an actual handheld. Most of the jokes come from the elves either doing things like showing off their pixelated asses or being bodily injured, such as having the pin dropper decapitate them. The way the sounds have been so poorly translated to the GBA means that every time they all call out “ELF ELF BABY”, it sounds horribly scratchy to the point that it’s hard to understand what they’re actually saying. There’s also a surprising amount of blood, for a T rated game, either from the elves or the random frog that you can kill with a bowling ball.

Overall, Elf Bowling is the sort of game that hopes that ignorant grandparents will get it for their children, as there is no other reason to play this game. While there is a DS version that makes the sound quality far clearer, the more powerful hardware changes absolutely nothing else, making it nothing more than an even bigger waste of anybody’s money. At the very least, we can rest easy in the knowledge that surely this must have killed this entire series… oh, wait, they made these things until 2008. Bah, humbug.