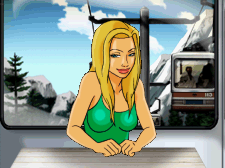 Sprung: A Game Where Everyone Scores - Nintendo DS (2004) 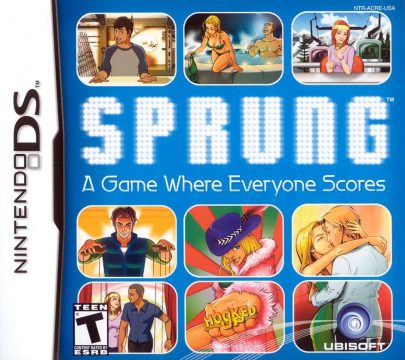 The “dating sim” has been a thing in the Japanese game marketplace for quite a long time, whether it be an RPG-style stat grinder a la Tokimeki Memorial or a straight-forward visual novel. Sprung, developed by Guillemot, Inc. (who later changed their name to Longtail Studios and developed the illustrious Best Friends Tonight, also for the DS, and Grey’s Anatomy: The Video Game) and published by Ubisoft at the launch of the DS, is of the latter. These types of games have never caught on in North America for any number of reasons, and Sprung does absolutely nothing to win any points in its favor. 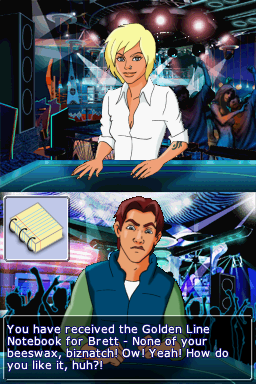 The story focuses on a bunch of nitwits who go on vacation to a ski resort to try to get laid. In a rather progressive move, you can choose to be either the guy, Brett, or the girl, Becky. Brett has a longtime crush on Becky and is trying to move out of the friend zone. Meanwhile, Becky is trying to get over a failed relationship by finding some hunks to snog. Their major personality traits is that they are main characters, and therefore not as broadly drawn as the ten or so other supporting cast members, all of whom fall into teen movies cliches including two of Brett’s friends/wingmen (both nimrods), the slut, the nerd, the snob, the bitch, the hippie (alright, that one’s a bit less normal) and a bunch of others. The tropes are well worn and not inherently terrible, but Sprung fails massively for two major reasons. 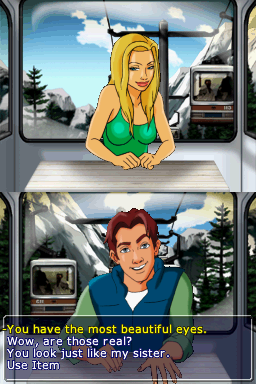 The writing, as one might imagine, is atrocious. And this game is all writing – there is nothing to do but listen to people talk and then respond. The dialogue has that sort of quality where it seems like it was written in a foreign language and then translated into English, but it wasn’t. The jokes are baffling and sometimes just don’t make sense. The worst of it are the “Golden Line Notebook” awards, which are “oh snap!” bits of dialogue spoken by your character that are apparently so clever that the game makes a note of them. One of them is a Pauly Shore catchphrase. That is one of the better ones. 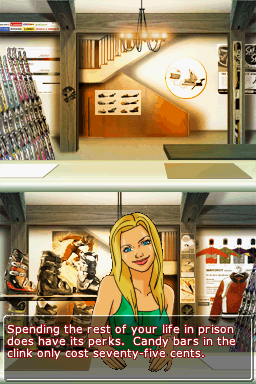 And then there’s the crux of the game. There are roughly thirty “chapters” split evenly between Brett and Becky. There is a set goal at the end of each chapter, which you accomplish by successfully navigate the dialogue trees. If you don’t, you lose and need to restart from a checkpoint (or more commonly, the beginning of the chapter.) What it all amounts to is a guessing game to figure out whatever the hell it is that the game wants you to say. Granted, there’s a certain pleasure in humiliating the insufferable main characters, such as telling Becky to immediately shack up with the supermodel scout, which will, of course, cause you to lose. But having to repeat the whole stupid nightclub segment as Brett, chatting up the same girls over and over, just so you can get all of their numbers, represents a total failure of game structure. 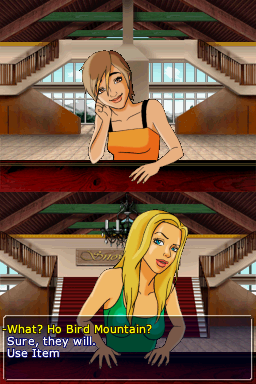 What’s more is that you quickly amass a huge library of items that are largely useless, but are occasionally required to win. Their uses are not always telegraphed – pepper spraying Becky’s stalker ex-boyfriend might seem like a good idea after he refuses to leave you alone, but that will get you a life sentence in prison. There’s also an ever-present illusion of choice. There are some vague branches through the story (do you want Becky to be a model or a waitress?), but for the main story, there’s no real choice about who your character gets to date. Brett and Becky are destined to end up together, no matter what you want, which represents a completely misunderstanding about the digital wish fulfillment that dating sims are supposed to be all about. 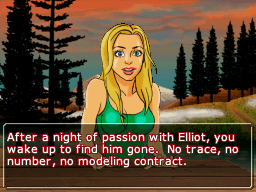 It’s not that these types of games are inherently bad – a few years later, the likes of Phoenix Wright and Hotel Dusk showed that these visual-novel-style Japanese adventure games could be perfectly likeable, and Persona‘s social linking is the closest most English speakers have to a true dating sim, and does it well. And it’s cool that Sprung actually pays attention to female gamers, an early strike to capture the larger audience that the DS was aiming for. Plus the art and animation is actually quite good, a huge step up from the static portraits in most Japanese games, and is quite possibly the first game on a portable Nintendo platform to feature the word “asshole”. But beyond that is a game that’s an embarrassment for everyone involved, including the player. 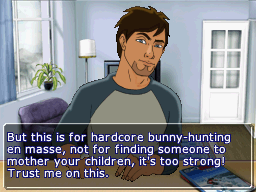 Prince of Persia: The Fallen King