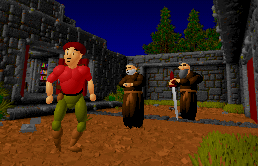 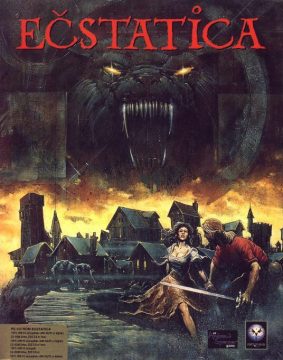 Horror games tend to be rather formulaic, drawing from popular works like Day of the Dead, Jacob’s Ladder or numerous Japanese horror film. The argument should be that, once you see something the first time, it shouldn’t be nearly scary the second (or third or fourth) time around. (This hasn’t stopped dozens of permutations of the same horror flicks either, but that’s neither here nor there.) Even the progenitor of the genre, Alone in the Dark, draws heavily from Lovecraft, if not ripping it off completely. 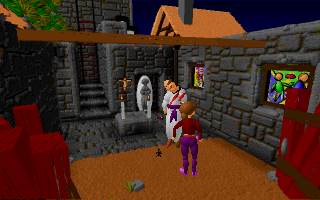 Ecstatica, developed by a British development team helmed by Andrew Spencer, and published by Psygnosis, is a PC survival horror game that doesn’t seem to be directly inspired by much of anything, except perhaps pure craziness. 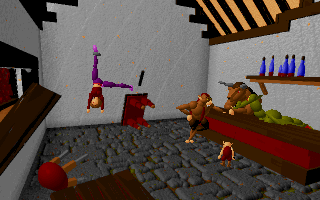 Ecstatica is usually referred to as “that game where everyone is made out of circles for whatever reason”. If you want to look cool around the math nerds, the technical term is “ellipsoids,” because they’re oblong, whereas circles are not. They’re also gouraud shaded, which helps them from looking too bizarre. The game came roughly around the time when 3D graphics were becoming more prevalent, but before 3D accelerators. It may look a little bit silly when compared to Origin’s Bioforge, a similarly styled game released just a year later, which used higher quality textured polygonal models, similar (and arguably superior) to Resident Evil. It’s definitely a wacky experiment – Accolade did the same thing with their (terrible) “fighting” game Ballz – but the bizarre style works completely in the game’s favor. 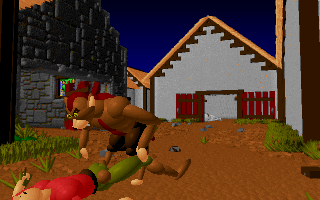 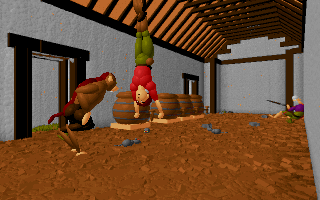 The game begins when the hero (or heroine – yes, you can pick) rides into a deserted town where things appear to have gone terribly, terribly awry. The town is mostly deserted, with dead, bleeding bodies left impaled on their kitchen tables, or hung upside down on crosses. The surviving townspeople are either drunk or crazy. You can sort of piece together everything by listening to their ramblings or occasionally picking up some scattered diaries, but the general gist is simple – stop whatever evil is in town, and get out with your life. 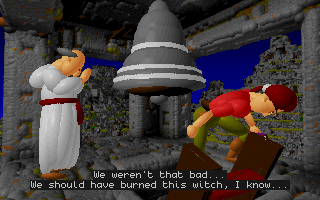 Of course you’re being stalked by the monsters in town the entire time. Right at the beginning, if you unsubtly charge into the village, you’ll be pounced on by a werewolf, beaten into unconsciousness, dragged into one of the houses, hung by your feet, and then beaten senseless until the werewolf gets bored of it. There’s a lot of gore, not to mention torture (and some completely random full frontal nudity). 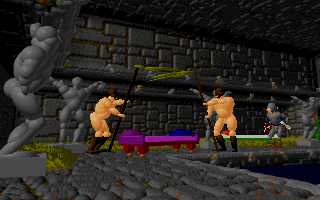 Said werewolf will continue to stalk you, wherever you go. Apparently it’s possible to kill him by wailing on him for five straight minutes or so, but that’s almost unfathomable. Whenever you see him, it’s usually just much easier to run and hide. You can find closets and baskets to hide in, and hope he goes away. The soundtrack will usually indicate when you’re in danger with Psycho-esque shriek noises, at least. You can’t always shake him off your tail though, which is a pain. The village is filled with other weird monsters. Rummaging around are little Piglet-type creatures, which are easily destroyed one-by-one, but can gang up you, drag you into their underground lair, and tie you up, Gulliver’s Travels-style. 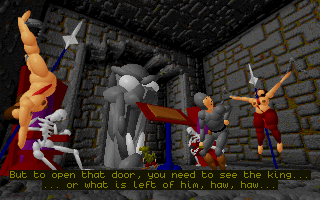 You can fight back, of course. The entire game is controlled with the numeric pad, which is a bit awkward at first, and means that it’s basically impossible to play with a gamepad (there’s no native support for it, anyway). You can punch or attack with your sword, you can duck, you can dodge, and that’s pretty much about it. Trying to fight tends to be an exercise in futility, though, because your character is slow to attack, and the enemies are usually much, much faster, which can easily spell your doom if you’re cornered. There’s no on-screen life meter, per se, but your character limps when badly wounded, and slowly regains health over time. Like most other similar games, the hero controls like a tank, although since you can’t change directions while running, you’ll often need to stop, change directions slightly, start running, stop, change directions again, and so forth. Additionally, the constant camera angle changes are quite disorienting, and make navigation far more difficult than it should be. 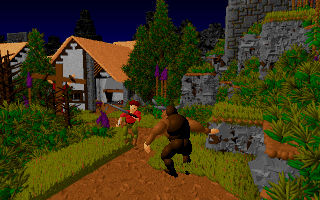 There’s a distinctly British sense of humour to go along with the horror. One of the first obstacles is a gigantic, burping, farting bear who swats at you haphazardly if you get near. In one of the houses, you find a knife lying on a table. Try to pick it up, and the table comes to life, cursing you with a really goofy sounding British accent and fighting you like a boxer. There’s a little girl whining for her teddy, who seems quite unfazed by all the violence and can easily face the denizens with merely her slingshot (an evolved version of Newt from Aliens perhaps.) At one particular point, the hero stops, looks around, and then proceeds to take a leak in the corner of the room. It’s all gloriously weird. The title screen calls the game Ecstatica: A State of Mind, almost alluding to the suggestion that the whole experience is a weird fever dream. 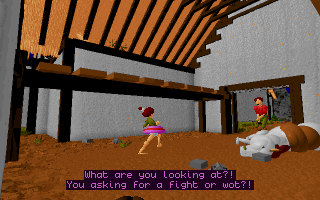 Beyond its story telling, the game is pretty minimalistic. The first major puzzle simply involves finding three ingredients for a potion, so you can turn into a squirrel and fit through a tiny passage. This quest takes up roughly a fourth of the entire game. Most of the remaining puzzles simply involve fetching stuff. There’s no real inventory system to speak of. You can never hold more than two items at the same time, and usually one of your hands is wielding a sword, anyway. The game world itself is pretty small, consisting of the tiny village, a nearby field, a monastery and a castle. If you know where you’re going, you can probably beat the game in less than two hours, although the open-ended nature means there’s lots of stumbling around to be done. 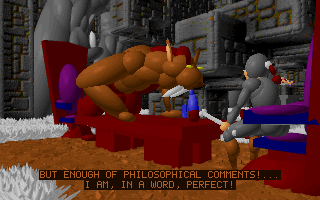 While Ecstatica is certainly rough around the edges, it remains a deeply fascinating game, just for how bizarre it is.