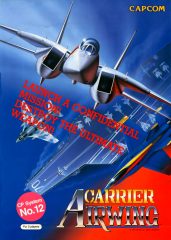 Of course, when it comes to barely resembling that which once was, Carrier Air Wing is a rather dissonant follow-up to Area 88. Bearing more of a resemblance to the U.N. Squadron incarnation of the arcade title, known as U.S. NAVY in Japan, Carrier Air Wing is a sequel in game mechanics only. It has absolutely no narrative connection to it’s predecessor. There are still three planes to fly with purchasable auxiliary weapons, life bars and shields. A mission handler talking about what the objective before each level is even present. None of these elements, however, are at all connected and even the anime aesthetic is gone in favor of an attempt at a more realistic appearance, though the success of that is questionable. 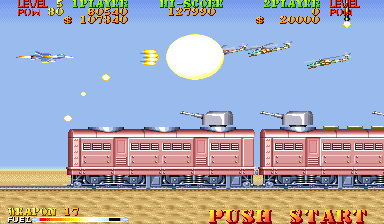 You are again provided three choices of plane, this time an F-14 Tomcat, an F/A-18 Hornet and an A-6E Intruder. They follow the same structure as last time with the Tomcat again focusing on AA auxiliary weapons, the Intruder taking the place of the Thunderbolt for AG weapons and the Hornet taking on the Tigershark’s job of being the balanced option. Further differentiating them this time, however, is each is better with a different primary weapon.

New to Carrier Air Wing is a cycling power-up system. In addition to leveling up the weapon being used, the POW-ups will cycle between blue, green, red and back to blue (in that order) with very colorblind unfriendly shades. The blue weapon provides forward firing rockets that hit hard and puncture through weak targets. Green grants a vulcan cannon similar to Area 88’s. Lastly the red conveys a bizarre clustered spread-shot that is heavily limited by pellet count on the screen. While this would arguably provide more variety and strategy to the game, in practice the best weapon is the Vulcan which is the favored weapon of the Hornet. Between that and never having bad auxiliary options there’s no real reason to use the other planes. Other new functions are a fuel bar that constantly drains a la the preceding 194X series and a bonus for killing all enemies in a level, which is not a static number. Considering that bosses have squads of four that reinforce for the entire duration of the battle, it’s easy to get cheated out of this bonus by killing the boss just as they spawn off screen. 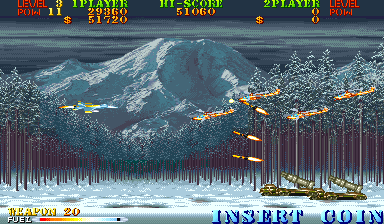 Taking on a more “U.S. Military Hell Yeah” kind of stance, Carrier Air Wing is about fighting terrorists from a third world country that has a ridiculous degree of power and military might. For some reason they have Antarctic bases and can launch satellite lasers into orbit. In the effort to thwart the “Rabu” organization, the Carl Vinson aircraft carrier is deployed by the Navy to kick them back to the third world. To complete this picture, your missions are briefed by a man who looks suspiciously like George Carlin. Battles are fought in a variety of locales where the player will suspiciously do more damage to the local infrastructure than the terrorists, who have the same kind of air fleets and ground support units present in Area 88. Some set-pieces are wholesale lifted from the predecessor.

The problem Carrier Air Wing faces is that what it tries to do differently feels unneeded or unwanted and when it’s not doing something different, it’s retreading old ground. At which point there’s no real reason to play it over Area 88.