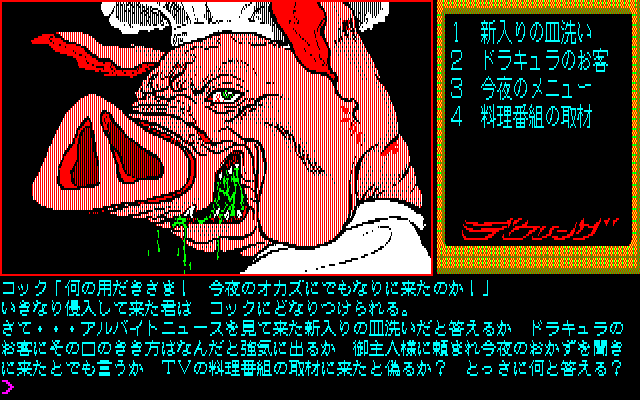 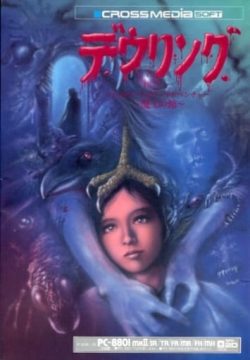 Please note this is a horror game and so a few of the images are quite gory!

Dwelling: Maou no Yakata (“Mansion of the Demon Lord”) is a horror adventure game made for Japanese PCs in 1987. The protagonist is drafted by the ghost of his old college professor to rescue his daughter Anya, who has been kidnapped by Count Dracula in his castle in Europe. Seemingly willing to risk life and limb for an old school acquaintance, you hope on board on a plane and begin your perilous journey. 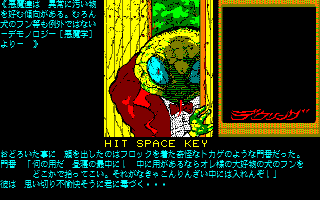 In most Japanese adventure games, there’s a menu of commands that allow you to interact with the environment. Dwelling is a little bit different in that your selections are custom tailored to the specific situation – walking in certain directions, using certain objects where they can be used, or selecting specific dialogue options. It makes interaction fairly easy since there are no incorrect commands that the game won’t understand. It also utilizes text input, which is necessary to solve a handful of puzzles. Still, even though it’s more comfortable to navigate that other adventure games, it’s still filled with dead ends and instant deaths, with a couple main endings.

The mansion is full of strange creatures and bizarre scenarios – it’s similar to ICOM’s Uninvited, which was released a year earlier in 1986, though with quite a bit more gore and a bit more nudity. Right before you enter the front door, you encounter a priest who asks if you believe in God. You’d better say yes, because he’ll give you a few essential items and some words to remember for when you face off against Dracula. When you knock on the door, it’s answered by a gigantic dung beetle in a suit, who requests that you go and deliver him some poop. Said poop is illustrated in detail, and it’s not the only puzzle involving feces. Through the rest of the mansion, you’ll find a gremlin, a mummy, a werewolf, and a pig cook who’ll decapitate you and stick your head in the oven if you answer him incorrectly. But along with the gross out stuff and the gore, there’s also quite a bit of silliness, as you stumble upon one youkai who’s munching on some cup noodles, and another that’s playing a PC game, also named Dwelling. You also get to have a sexual encounter with a sentient mannequin (she asks you your age beforehand, just to make sure it’s appropriate.) There are also a few combat encounters, determining via a roulette that picks cards. Each the death scenes are a little silly, accompanied by a chattering skull and some goofy music. 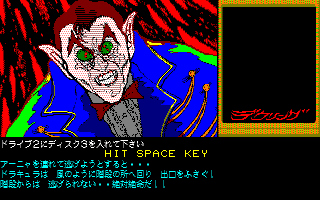 The strange mixture of horror and comedy create an peculiar atmosphere, particularly due to its excellent artwork. The team behind it doesn’t seem to have done anything else – Cross Media was a part of Victor Music, which was later rolled into its subsidiary Pack-In Video. Amusingly, the end credits read, in English:

“This is the first program that made by Buck Lunch staff. We started making this program from 1985, Summer and ended on January 11, 1986. We are sure you’ve enjoyed this program enough. You look foard [sic] to the next one.

Thank you and good bye.
We love you.” 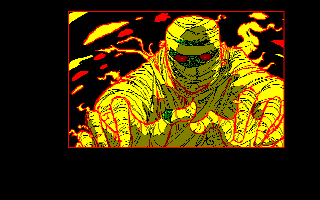 Keep in mind these credits scroll against an enormous pile of blood and gore with some happy go-lucky-music playing the background, a fitting finale for such an unusual game.

Walkthrough – In Japanese, preserved by the Wayback Machine