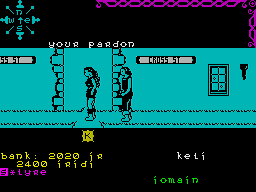 Gargoyle’s second adventure game was initially based on Lewis Caroll’s The Hunting of the Snark. Interviews from as late as 1987 make it clear that it was Greg Follis’s dream project, but it never came to be. The surprise success of Tir Na Nog led them to instead make a prequel follow-up originally titled Cú Chulainn – The Early Years.

Cú Chulainn and his trusty charioteer, Leog, are returning home from battle. Resting at an inn, a beautiful woman named Skar coaxes Leog into leaving Chulainn. Unfortunately, Skar is a sorceress who kidnaps Leog as payback for Chulainn killing a prince named Amhair. Leog is being held captive in the titular city of Dun Durach, and Chulainn must save him.

While Dun Darach looks very similar to Tir Na Nog, Greg and Roy claimed only the central character and the scrolling routines were the same. The rest of the game was built from scratch, and in many ways, it’s an entirely different experience. 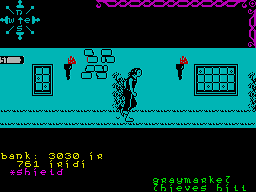 For one, the game world is much smaller. The original design featured a hundred streets and forty shops to explore, but the final product featured only fifty-five streets and few stores. Perhaps the most infamous omission was the removal of a full red-light district that was supposed to fill up the center of the map. Lady Q’s store was intended to be brothel, showcasing a scene featuring prostitutes that opened up the seedy underbelly of the city. Evidently this posed a problem, so the team just ripped that portion of the map out of the game and placed a “forbidden” sign over Lady Q’s. As the game was published by Gargoyle themselves, it probably was an act of self-censorship to avoid having their meal ticket labeled a proverbial video game nasty.

Although the streets in the game took up a minimal amount of space on the cassette, the game’s myriad of new characters was much more taxing on storage. They’re all fully animated “walking man” clones, programmed to move along a set circuit path the entire game. These people are all individually named and accomplish a variety of tasks: some trade quest items, many offer hints, and others steal important inventory items or money. Since the game eschews any sort of combat, thieves quickly become the only real enemy as integral quest or trade items can be quickly lost, forcing the player to maneuver all the way across town to grab another moleskin or gold bar.

Crash Magazine’s Roger Kean stated that the game is almost like a “financial simulation”, and while this is a wild overstatement, finances play a huge role in Dun Darach. Buying, selling, and potentially stealing from merchants is the key to completing the game. While money can be earned by buying lyres low and selling them high at different stores, there also is a casino that can be easily exploited via the save system. Theft isn’t strictly punished either: if you’re caught stealing goods, the store owner simply locks the door until you drop the item or pay for it. Policemen like Ryde can also confiscate your stolen goods, but if you’ve bought a Thieve’s Guild membership card, they overlook the misdeed. There’s even a bank where interest is incurred on deposits. 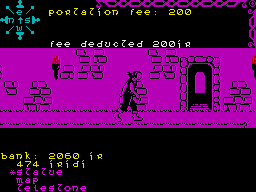 While the economy is easily tamed, the puzzles are not. Dun Darach is in a few ways easier and in most ways even more enigmatic than Tir Na Nog. Some solutions are obvious: characters like Dain will simply ask for a lyre, making life ten times easier. Of course, most puzzles are far more intricate. To navigate the maze-like castle, we need to find Skar, who’s strolling around Dun Darach with an invisibility enchantment that must be dispelled. Once this has been accomplished, get ready to brush up on ZX Basic, because knowledge of this archaic programming language is crucial to solving the puzzle. Either way, while the game world is smaller, it will take more time to uncover its secrets.

While Dun Darach doesn’t have the massive size of Tir Na Nog, the game is much more devious. Everything is easier to map, but it’s harder to get from one place to another without something being stolen. There are more hints, yet there are just as many red herrings. With every obvious answer, there are two incredibly obscure riddles. For the adventurer who appreciates a grand challenge, Dun Darach will exceed all expectations.

Critics hailed the game as an instant classic upon its mid-1985 release on the Spectrum and Amstrad. Most reviewers praised the new features and the greater variety of animations, boasting that Dun Darach greatly surpassed its predecessor in sheer quality. Again, the only difference between the Spectrum and Amstrad versions are the latter has more color and occasional slowdown issues. 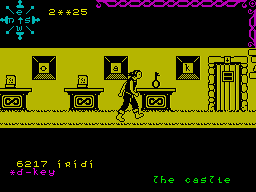 As with most Gargoyle Games releases, reissues were a common occurrence. Rebound quickly re-released it the following year, Gremlin Graphics reissued it in 1986 in its 4 Crash Smashes compilation, and it was featured in the covertapes of Sinclair User 119 and Your Sinclair 63.

In 2011, Luny, a UK programmer who grew up playing software the ZX Spectrum, started work on Scrolly Adventures, an android adaptation of Dun Darach. The current demo build features the character and camera options from the original game. Holding the left and right sides of the screen moves the “walking man”, and pressing the bottom of the screen rotates the camera 90 degrees. Most of Luny’s progress is detailed on his website and on the Retro Remakes message boards, although development eventually stalled. His site features the current demo and information on his favorite Spectrum developers, including Gargoyle Games.