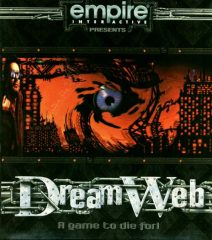 DreamWeb, a dark, cyberpunk adventure, just might be the most depressing game ever made. As a down-on-his-luck ex-bartender named Ryan, it’s your duty to hunt through the bleak streets of the city and brutally murder seven different people. Ryan knows this because he’s constantly haunted by visions of the “DreamWeb”, a place inhabited by monks who instruct him that these seven souls are going to cause an imbalance and doom the world.

It’s a little creepy. For all intents and purposes, you are playing as a serial killer. Overt violence is nothing new in electronic gaming, but never so much as DreamWeb. For as much controversy as Mortal Kombat and Grand Theft Auto caused, they’re so cartoonishly silly that they lack any serious impact. Darker games like Manhunt and Hitman are vaguely justified by their scenarios (“kill or be killed” in the former, paid work in the latter), but never has a game put you in a character so dramatically unhinged that they think they’re saving the world, when in reality, they’re hunting and gunning down people in cold blood.

But are these victims truly innocent? Is the DreamWeb a mere hallucination, a strange rationalization for Ryan to unleash whatever demon lies within? The answer is never explicitly given, which is part of why the concept is so brilliant. The original release came with a supplementary book called “Diary of a Mad Man”, which includes a variety of insane scribbles. In the game, Ryan never questions his motives, and even if the player does, not murdering means not proceeding. Beyond the seven targets, for which they need to die for their future sins, there is one innocent person you need to kill. It is a security guard and it is not out of self defense – you just pull out your gun, shoot him, and move on. Ryan doesn’t even comment on it. Perhaps it’s rationalized that this bystander needed to die for the greater good. Perhaps it’s more that Ryan has no use or regard for human life to begin with. And yet there are a few small bits that suggest that Ryan may not be hallucinating – an item, a glowing crystal, is required for one of the missions. And after each murder, Ryan is sucked into the DreamWeb and spit out at some other random location in the city, always avoiding arrest. By the time the adventure reaches its logical conclusion, the player has to make up their mind: is Ryan a tragic hero or a deranged lunatic?

For those looking for entirely original storytelling experiences, DreamWeb is an absolute must. It does take awhile to get used to interface, though. It’s a point-and-click adventure, although a non-standard one that uses a strict overhead perspective. The action takes place in a window roughly half the size of the screen, with a status bar on top and Ryan’s largely unchanging portrait on the side – he looks a bit like Rufus Sewell in Dark City. Since the main window is so small, there’s a secondary window which shows a chunky magnification of whatever’s below the cursor, along with a text description, bringing the term “pixel hunting” to a new level. Even then you need to comb each area thoroughly, mostly to find the 2×2 blotches that constitute keypads and control panels. Needless to say, it’s incredibly easy to skip over an item and find yourself running back and forth across the whole city to find it. There are a couple of areas where you can find yourself in a dead end, though mostly if you don’t pay attention. Obviously Ryan can get killed, but dangerous situations are always made clear, and nearly all of them can be solved by diving into your inventory and grabbing your gun.

Nearly everything can be interacted with on some level, which provides an impressive level of detail, but also causes a case of inventory overload. Puzzles in adventure games only really work when the goal is clear and the tools are restricted, so one can use the process of elimination to figure out how to solve them. In a standard adventure game context, DreamWeb has fairly easy puzzles – disable control boxes, etcetera – but you can pick up almost anything, and when you have limited inventory space, it becomes way too confusing. Beyond this, the quest isn’t terribly long. The early stages drag a bit, as Ryan needs to obtain a gun and find his first victim, but all of the later ones are quite brief. 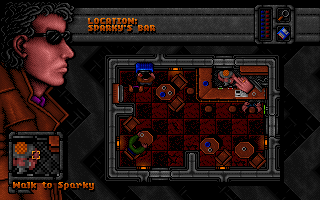 DreamWeb had two releases on the Amiga, with the AGA version having 256 color graphics and an extra song over the standard version. It was also released on the PC, first on disk format. It’s mostly the same, although the soundtracks are different. The Amiga version features extraordinarily moody electronic music, which is something the MOD format pulls off perfectly. The PC version is similar in style, although some of the compositions are different. They’re all short, looping, streaming sound files, although they suffer from low-fi encoding. Either way, the soundtracks are fantastic, similar to any number of John Carpenter films.

A CD version was also released for the PC, which is mostly the same except for some scattered voice acting. Only the actual dialogue has voices – most of Ryan’s internal monologue is still text only. It’s hard to tell if the actors are trying to sound depressed or merely disinterested, but in the end, it still works towards enhancing the downtrodden mood of the whole experience. Unfortunately the soundtrack is still low quality, although there’s a bonus CD audio track featuring remixed music.

However, certain re-releases of DreamWeb are censored. When it was originally released, it featured a rather notorious scene where Ryan barges in on his first target to find him having sex with a groupie. Both are completely naked, as the girl crawls off and hides under the bed, revealing some male frontal nudity. This scene alone was enough to get the game banned in Australia. The game was censored and then approved for release, but to perhaps numb the controversy, most other CD releases worldwide are bowdlerized. These versions put some clothes on the couple, but the scene is otherwise the same. There are other minor bits of nudity which were left untouched, like Ryan’s girlfriend in a bathtub. But it’s still quite odd that this scene alone was called out for controversy, when the rest of the game features a variety of extraordinarily bloody deaths, ranging from shootings to explosions to characters getting pummeled by trains. As one point you have a conversation with a woman whose lower half has been blown across the room. This sort of “violence OK, sex BAD” thing is the same issue that got Grand Theft Auto: San Andreas in trouble with the “Hot Coffee” incident years later, which feels slightly backwards.

DreamWeb was developed by Creative Reality, who isn’t known for too much else outside of the PC/PlayStation survival horror game Martian Gothic. As with most of these companies, it’s a pity that they’re gone – even twenty years after its release, the video gaming field still has the need for more mature storytelling, and DreamWeb pulls it off fantastically, even if it’s fairly confusing as a game.

As of October 21, 2012, DreamWeb has been released as freeware and is playable in ScummVM. The PC floppy and CD versions in several languages are available at the ScummVM Downloads page.

Anarchy A review.
NTSC-UK Another (quite excellent) analysis. (Archived in the Wayback Machine)
Dangerous Games A look at some of the games banned in Australia, including DreamWeb.
DOS Games A fan site with video walkthroughs.
ScummVM Downloads Here the game is available as freeware.