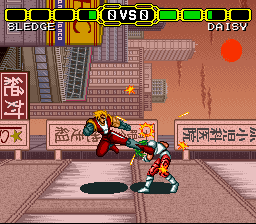 Doomsday Warrior looks like total trash at glance, but actually has a couple of interesting ideas in it for a 1992 fighting game. True to form for almost all Telenet (Laser Soft, Renovation, etc. are actually developers and publishing brands created by Telenet itself) games, while it falls short of greatness, you can tell Laser Soft at least gave it their all.

Doomsday Warrior was released shortly after the fighting game craze set off by Street Fighter II: The World Warrior in the arcades and was quickly forgotten as ports of more polished fighting games by Capcom and SNK began making their way to home consoles. Still, unlike most of its contemporaries, Doomsday Warrior is not a rip off at all, using a completely different button layout, visual style and character aesthetic compared to Capcom’s seminal game.

The game revolves around the Doom Squad, a group of seven powerful warriors brainwashed by the game’s cloaked villain, Main. They terrorize and help him rule over a dystopian Earth with an iron grip. One breaks free of this control to restore freedom to the planet by defeating the other members and Main himself. The brief descriptions of the Doom Squad’s members are pretty laughable, and it can be difficult to discern what combination of each character’s personality, fighting style, or occupation they are meant to describe. 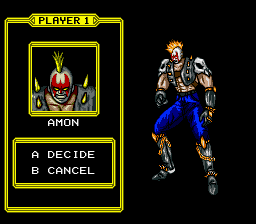 An homage to one of Mr. Heart’s goons in Hokuto no Ken, he has the same diving special move as P. Lump. Good thing too since he’s generally slow, with many ineffective attacks. 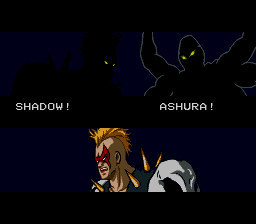 A four armed fire wielding giant, He’s awesome, so of course he’s not playable (unless you have a Game Genie or other cheat device). The game’s final boss, Main, hovers ominously in the background of his stage. 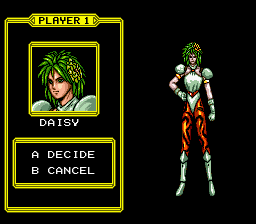 Her outfit says “Armored Aerobics Instructor Plant” more than “Dancing Plant,” but as the resident fast character she’s fun to use and has very effective kick attacks. 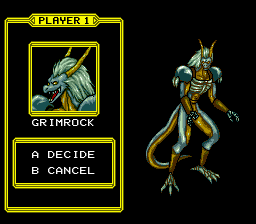 Despite his imposing stature, this guy’s more of an agile character like Daisy, with good range on his variety of great aerial attacks. Grimrock, Amon and Daisy each have two throw moves instead of just one, making them fairly powerful in general. 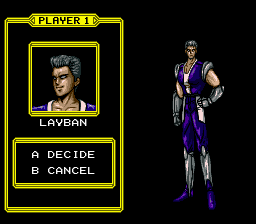 Sledge’s rival. Save for his face being drawn differently he is identical to Sledge, the “Hero of Earth.” So deep. 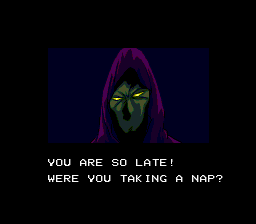 Shown only as a dark, cloaked figure, we’re supposed to be shocked and left in awe when he dramatically throws his cape off and reveals himself to be a waifish glam rock wizard just before the final battle. Its intended effect is not achieved. Not really sure what they were thinking with his name either, unless they meant for it to be Mane in honor of his luxurious locks. 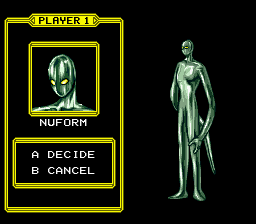 This guy’s design and animations are actually stand outs. Fighting games wouldn’t see another character like him until the appearance of Twelve in Street Fighter III: 3rd Strike in 1999. His win pose has him brandishing a folding fan with a rising sun on it. 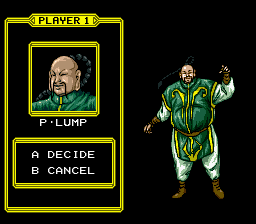 P. Lump is very similar to Cheng Sinzan in Fatal Fury 2 with his small ground projectile and aerial diving moves.

Fought right before Ashura, who waits in the background with Main while you fight. He’s actually just a shadowy clone of which ever character you’re playing as. Hilariously, the “Left Hand of Evil” is at Main’s right side before the fight starts, with Ashura, the “Right Hand of Evil” sitting at his left. You can play as him via cheat devices like Game Genie, but the game will freeze towards the end when it comes time to fight Shadow, probably because the game fails to find a valid character to pull a move set from. Wait, Left Hand, Right Hand, the final boss’ name is “Main,” like hand. Good show Laser Soft. 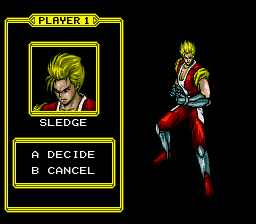 The generic main character, he specializes in being the most accessible as well as the most boring of them all. He can shoot fireballs as well as perform a sliding punch attack evocative of Terry Bogard’s “Burn Knuckle” move in the Fatal Fury series. 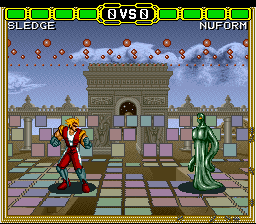 While the game has a good soundtrack, some cool backgrounds, and a small but generally distinctive cast, what really sets it apart are the controls. Unlike the standard set by Street Fighter II, you have to hold down a button to block, and there’s a jump button as well. Two other buttons are used for punches and kicks, with variations made possibly by holding up (or down while in the air) as you attack. Special moves in this game are done with charge motions. The power and range of these special moves is determined by how long you charge the move for, which lets players effectively feint by performing the fastest but weakest iteration of a move to get closer to an opponent.

When playing against the computer, after every fight you get a few points to distribute across various attributes (how strong your punches and kicks are, how much life you have, etc.) based on how much life you have left at the end of the match. This rewards good players but makes the game get way too difficult if you have a few close matches early on. There is an easy mode which has much less aggressive AI, but it does not give you passwords to save your progress and upgrades, so you have to beat it in one sitting. Players can also regenerate their energy bar by keeping their distance and not attacking briefly, though only up to the closest “segment” rather than refilling it completely. Overall the game is fairly easy to get into due to the simple way of executing both special moves and normal attacks.

What really breaks the game, though, is how grappling works. Like in many fighting games you can throw an opponent by holding towards the opponent and pressing an attack button while right next to them. These are powerful, and cosmetically dramatic as well with anime inspired motion lines filling the screen followed by a quick explosion sound as one character slams another into the ground. Executing throws ends up being the easiest way to quickly defeat an enemy. With Sledge, Daisy and Layban as an example, each has a move that lets them slide across the screen and attack quickly. It’s actually better if the opponent blocks these since you can then immediately attempt to throw them. Laser Soft must have been aware of this too, as when playing on the game’s default difficulty the AI will often jump out of the way of incoming special attacks, only really bothering to block projectiles, punches and kicks. 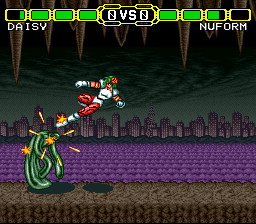 The other thing holding the game back is that, for a game with such basic controls, there’s very little special move variety between the characters, with each of their throw animations being the real stand outs. Characters in general only have two special moves total, with some like Amon only having one! So while the game can seem fun at first it gets boring fast, as special moves are shared even between characters that look nothing like each other and have completely different normal attacks. It only further emphasizes how landing throws on the opponent is the most important tactic to use for every character.

Doomsday Warrior was produced by Laser Soft regular Masami Hanari, who was also responsible for the Cosmic Fantasy series as well as campy but fun Last Alert. He was also executive producer of the extremely underrated SNES RPG Dark Kingdom. While Doomsday Warrior shares the lackluster mechanical variety and just polished enough to ship graphics of his other works like Valis II and Cosmic Fantasy II, it also shares the fun, 80s anime inspired atmosphere of Telenet’s best games as well. The Doom Squad was designed by Kenji Kobayashi, and stand out as distinct for their time despite their short comings when actually playing the game. Kobayashi would go on to do art and graphics work for a variety of games throughout the 90s and early 2000s, the most notable being Brandish  (PCE CD, 1994), Brigandine (PSX, 1998) and Siren: Blood Curse (PS3, 2008).

While his career was not as long lasting as his contemporaries, most of Doomsday Warrior‘s programming was handled by Hiroshi Ono. This is interesting as he also programmed the battle systems and animations for Saga Frontier II, a game filled with many sliding overhead attacks and dashing moves reminiscent of Doomsday Warrior‘s repertoire. Most notably, however, he was the main programmer for both Bahamut Lagoon (SNES, 1994) as well as Valis IV (both its excellent PCE CD release as well as its less successful SNES port). 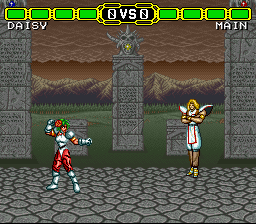 So as usual for many of Telenet’s games, there is some pretty heavy talent involved in their development, but due to Telenet’s desire to capitalize on new systems as quickly as possible we get a game that could have potentially been memorable but is just a bit too rough around the edges for its own good. Laser Soft itself was formed specifically to make games to take advantage of the new power available on the PC Engine CD, and one can’t help but notice that as an early SNES game, Doomsday Warrior was held back a bit from the scope and intensity Laser Soft wanted to evoke.

The animation and graphics are just average, but the actual design of the backgrounds are fairly good. Some have many layers of parallax scrolling, others are more static but are in cool settings like on the side of a building instead of a rooftop or one set on a series of small hovering platforms. Characters dramatically teleport to these backgrounds rather than just standing around as the fight starts. There are also nice touches like the continue screen being an answer to Main threatening you to give up now instead of just a countdown or a choice of “continue” and “end.” Animated, super deformed versions of Layban and Sledge struggle with each other as you decide. And as goofy as it is, Main’s reveal is a genuine, though unintentionally hilarious surprise.

Doomsday Warrior‘s music is actually quite good despite the overuse of the infamous Mario Paint trumpet effect that claimed the potential quality of many early SNES soundtracks. The music was composed by someone credited as “Junta.” This is probably Laser Soft music regular Jun Hasebe as his work on Valis IV and Cosmic Fantasy II share some similarities.

In general, Doomsday Warrior is poorly balanced as a fighting game and will quickly get boring for many players. As one of only four SNES games from the Telenet conglomerate, however, it provides a window into their attempts to translate principles from their Japanese computer game days like the smaller than average character sprites (for the fighting genre) and myriad cutscenes, stats and upgrades to inject personality into the game in lieu of dazzling graphical effects or fast action. It’s also a rarity in the SNES library for being a playable fighting game that doesn’t follow the Street Fighter II template.