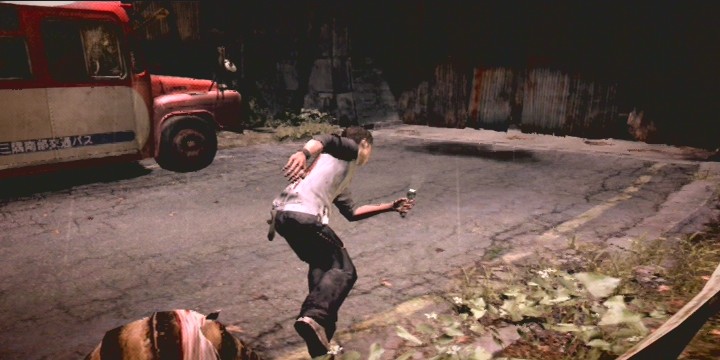 Sony, in its wisdom, decided that the original Siren never really found the audience that it deserved. They commissioned the Siren team to create a half-remake, half-re-imagining of the original Siren for release as a PS3 exclusive. The result plays like a “best of” Siren, with many of the game play innovations of the second game combined with the story and structure of the first game. On top of that, there are several tweaks and upgrades to the game-play that allows Siren to compete with more modern horror games, and adds enough new plot twists and characters to provide a reason for even seasoned Siren fans to play.

The game again takes place in Hanuda village in rural Japan, and follows roughly the same story as the first game. There’s now an American TV crew that witnesses the botched ritual at the beginning of the game, which provides some new cast members to play with. It’s interesting that most of the characters are Western, as it seems like an attempt for the development team to more closely connect with non-Japanese gamers. The script is top notch, with excellent voice work across the board. The graphics are either incredible or horrible depending on who you talk to: the texture work on the environments is great, but there’s a filter running over everything at all times that you can’t turn off. At some points it’s hardly noticeable, but in a few key instances, it can obscure important things like hiding places and items. At any rate, it’s a step up from Silent Hill: Homecoming, released around the same time. Every playable character in the game has an incredibly realistic likeness – in some scenes, it really helps the player to “get into character”, and it allows for a range of emotion and, for lack of a better term, “acting” from the characters that other survival horror games lack. It adds to the tension and fear that you, the player, are intended to feel. In some scenes though, it takes a running, giggling, headlong jump into the Uncanny Valley and pulls you right out of the game, Shibito or no Shibito. 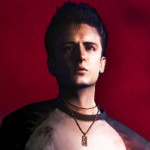 The “hero” character in Siren: Blood Curse/New Translation, and the analogue of Kyoya Suda from the original game. He interrupts the ritual that the American television crew witnesses during the opening cut scene, and quickly learns that sticking his nose in other people’s business is a very bad idea. 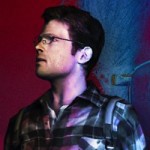 A college professor, and ex-husband of Melissa Gale. He is also the father of Bella Monroe, and is more or less Tamon Takeuchi from the original Siren. 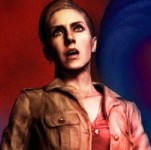 Sam’s ex-wife, Bella’s mother, and the host of the TV show that witnesses the botched ritual at the beginning of the game. 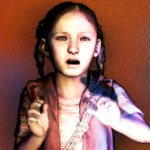 The daughter of Sam and Melissa, who is somehow deeply tied to the curse that plagues the town. 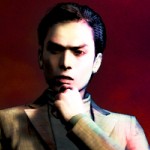 A local doctor, a member of the local cult, and eventually an ally. Seigo Saiga helps Howard understand his role in the strange events surrounding Hanuda village, and sacrifices himself to help Howard put things right… At least, as right as they’ll ever be. 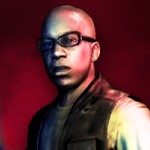 The cameraman of the American TV crew that witnesses the ritual at the beginning of the game, and a dangerous Shibito for most of the game’s duration. He is secretly in love with Melissa. 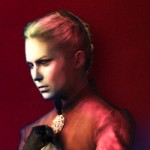 The analogue of Hisako Yao from the first Siren, Amana is sometimes helpful and sometimes dangerous. She acts as the tutorial for Howard in chapter 2, but is far more insidious than she first appears. She has strange ties to Bella Monroe. 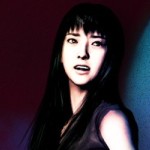 A young lady who is destined to be ritually sacrificed. She becomes close to Howard during the course of the game, and eventually helps him to end the terror engulfing the rural town. 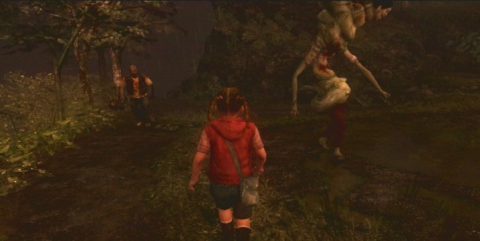 The combat and selectable difficulty from Forbidden Siren 2 make another appearance, which goes a long way towards making the game more accessible (though the difficulty is still very high, much higher than any given Silent Hill or Resident Evil). Sight-jacking now triggers a “split screen” effect, with your character’s perspective on the left hand side of the screen, and the perspective of whoever you’ve sight-jacked on the right hand side. It takes some getting used to, but it offers a tactical flexibility that comes in handy once you get used to it, especially since you can now move while sight-jacking (something you could not do in the original Siren, and only one character was capable of in Forbidden Siren 2). The game is still broken up into chapters, but the length of each chapter is significantly reduced and streamlined, which creates an interesting episodic feel. It even has “next episode” teasers when you complete a chapter. Depending on skill and experience, each chapter takes roughly ten minutes to an hour: a significant reduction in time invested when compared to the original. Playing a game as tense and demanding as Siren in small chunks is brilliant game design: it allows the player to play just enough to get his fix, and come back at his leisure. It makes it much easier for anyone to eventually see it through to the end.

Common actions, such as yelling, turning the flashlight on and off, and so on, are mapped to the D-pad, which means less time fiddling with menus. The multiple pathways of Forbidden Siren 2 are gone, which cleans up the narrative nicely and makes the events surrounding Hanuda village clearer. When you complete Siren: Blood Curse, you’ll know what’s going on. 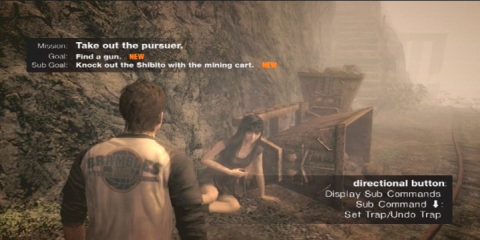 Siren: New Translation received a Blu-Ray release in Asia, Japan and Europe, with the European version actually including an additional “making of” documentary, while North American PS3 owners aren’t so lucky. Siren: Blood Curse (the North American title of the game) was released exclusively for download on PSN, available as three separate “episodes” for fifteen dollars each, or alternately, one single download for forty dollars. This is either a blessing or a curse depending on how you look at it. If you don’t have a great broadband connection, forget downloading the game: it’s massive. That naturally leads us to our second problem, which is hard drive space. Owners of the twenty gigabyte PS3 are purely out of luck, and with all the games that require mandatory installs of five gigs or more, even owners of sixty and eighty gigabyte PS3 might balk at filling half of their hard drive with a single game: a single game that takes upwards of five hours to download, no less. Thanks, Sony.

On the other hand, if you aren’ sure that Siren is the game for you, and the free demo available on PSN doesn’t offer enough of a glimpse to make you decide one way or the other, you can buy a single episode and play through it cheaply. It won’t take more than a few hours, and won’t take up nearly as much space. If you decide you like it and want more, the other episodes are always available on PSN. 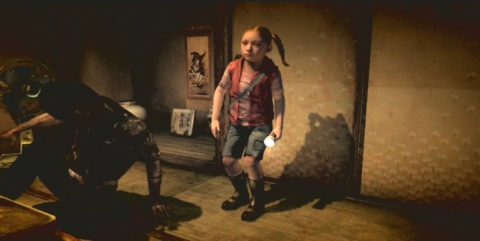 The solution for many people was to simply import the Asian version. It’s completely in English, both dialogue and text, and is relatively cheap. With shipping, the game costs less to import than most new games cost off the shelf of your friendly game retailer. Say what you want about Sony’s policies and business practices: not region-locking games makes situations like this much easier on everyone.

Yet another phony website was released alongside Blood Curse, this time the personal blog of Howard Wright, the protagonist. It’s pretty light on content, but worth a look anyway.

If the single minigame from Siren 2 wasn’t cool enough, Siren: Blood Curse actually contains three! Each of them are for the fictional portable game system Ultra Network King, which is more or less like a Nintendo Game & Watch. There are three game cartridges: 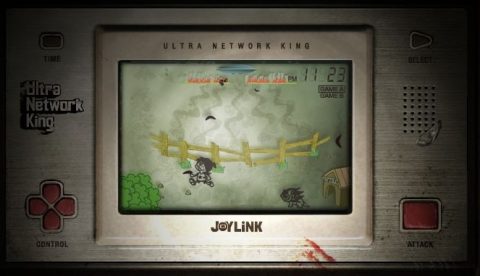 You control a little boy at the bottom of the screen who needs to defend himself (and his dog) from an onslaught of tsuninokos (a mythical snake that occasionally pops up in pop culture and legends – you can find one in game, too.) You attack with boomerangs, but you need to catch them on their return trip! 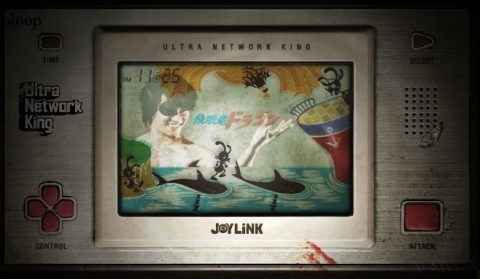 In contrast to the tsuchinoko, a jackalope is a mythical animal from North America. Here, you need to balance on the back of two whales in order to catch stars amongst a litany of falling debris, and then make your way to the right side of the screen to board a boat. Stay too long in one place, and the whale will dive under water, sending you to a watery grave. Very odd. 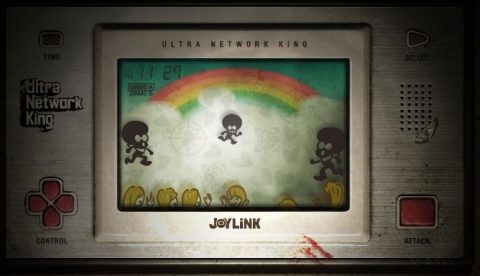 In this game, you play as little afro-wearing men in the sky, who need to catch hearts in the two circles on the screen.

Although these games are accessible from the main menu in the game, you can also play them with the Firefox web browser. What you need to do is download a Firefox add-in called User Agent Switcher 0.6.11 and install it. Once installed, add a user profile called “Mozilla/5.0 (PLAYSTATION 3; 3.42)” (without quotes). If you don’t do this, you’ll just get a “Forbidden” error if you access the address normally. Now, access this website:

Just click on it, and you can use the keys to navigate, and hit the mouse button to select the game. These same controls are used to play the games themselves.

A film adaptation of the Siren series was released alongside Forbidden Siren 2 in Japan. While it takes a number of liberties with the story, the atmosphere and surreal plot are straight out of the game.

A young woman named Yuki moves to the island Yamajima with her Father and brother Hideo. The strange habits of the local townsfolk, coupled with the mysterious history of the island itself, disturb Yuki greatly. When she’s told by a local fisherman to never go outside when the Siren is ringing, a series of events is set in motion that will both reveal the town’s dark secrets and challenge Yuki’s perception of reality.

Most of the narrative devices employed by the game incarnations of Siren, such as following several characters at once, out of joint chronology, and the archive systems, are abandoned in favor of a more traditional film. It’s similar to the changes made to the story of Silent Hill in the movie adaptation: when you need to distill a complex and lengthy narrative from twenty hours down to one and a half, certain sacrifices must be made.

Everything from the games is present and accounted for. There are Shibito (although they’re never specifically named as such) that Yuki must avoid, there is a shrill and ominous siren that heralds disaster, and there is a dark and terrible secret at the root of the town’s curse. The story is far clearer and focused than the games, even given that the ending is somewhat nebulous and open to interpretation. Unlike the majority of “video game movies”, Forbidden Siren is a deep and interesting film that fans of the games shouldn’t miss. The film was never released in North America or Europe, but it’s available for import. You can find a plot synopsis and translation on the internet.