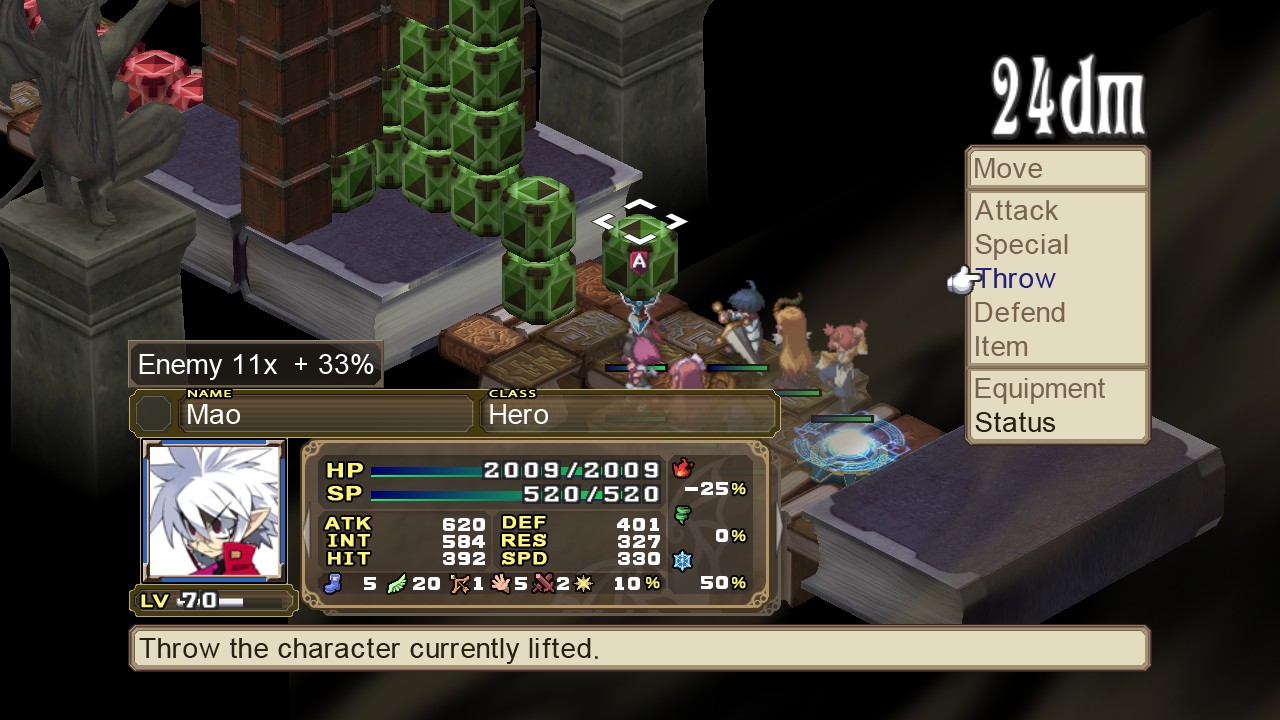 The third Disgaea title is also the first PlayStation 3 release for Nippon Ichi. Despite the added horsepower of Sony’s high definition console, Disgaea 3 is still very decidedly low tech. Although the menus, interface, and character portraits are nice and crisp, and the widescreen display is welcome, the rest of game very, very easily been done on the PlayStation 2. The environments are only slightly more involved than the previous games, and the character sprites are still low res and hugely pixelated. If they were going to make faithful Nippon Ichi fans buy a whole new console to follow their games, the least they could do is redraw the sprites!

But all technical issues aside, Disgaea 3 is still a fantastic game, one that combines the likeable characters of the first game with the enhanced gameplay mechanics of the second. The focus this time is on the Demon Academy (undoubtedly inspired by Harry Potter), where young demons go to study. 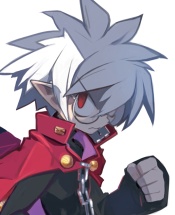 One of the most honored students in the Demon Academy, Mao has never once been to class, and is one of the most powerful demons around… or so he claims. He’s furious with his father for accidentally destroying his video game console and ruining all of his saved games. He rants a lot about hating friendship and such, and is an otaku at heart. 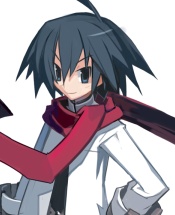 A “hero” from the human world, Almaz is looking for Princess Sapphire in hope of saving her from evil. Mao steals the “hero” title from him, only to learn that Almaz is actually kind of a wuss. He’s also a bit on the naive side. He eventually starts turning into a demon himself. 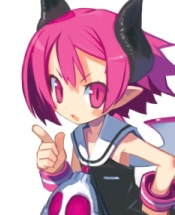 Mao’s nemesis, Raspberyl is a younger-looking girl who’s considering a delinquent, because she actually shows up to class and obeys all of the rules. (Remember, things are reversed in the demon world!) She causes trouble in the beginning, but eventually joins up with Mao.

Every school drama needs a trio of girls. Kyoko and Asuka, a ninja and samurai respectively, round out this cliche as Rapsberyl’s two lackeys. 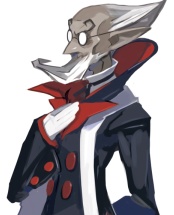 Mao’s butler. In no way suspicious at all! 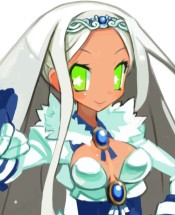 The object of Almaz’s affection, Princess Sapphire is more than just capable. Despite her cutesy look, she’s actually got a pretty big mean stream going on her behind her. She also wishes to defeat Mao’s father. 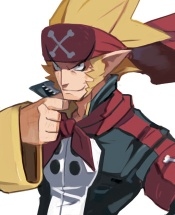 The demon school’s home economics teacher. Well revered around the school, he’s a renowned karate expert, and speaks with overloaded food metaphors. He even speaks a bit like famed TV chef Emeril Lagasse, occasionally adding “boom!” to the end of his sentences. 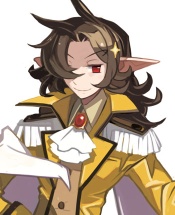 Every Disgaea game needs some kind of flamboyant male, although Master Big Star is neither as flamboyant nor as idiotic as either Mid-Boss or Axel. His first name is actually “Master”, and he is the leader of the sophomore class. 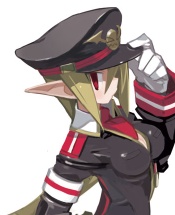 Short for “Salvatore”, this military looking lady is actually a member of the Diez Gentlemen (despite being female), one of the handful of elite seniors, and is a scary force to be reckoned with. She speaks with a heavy European accent. 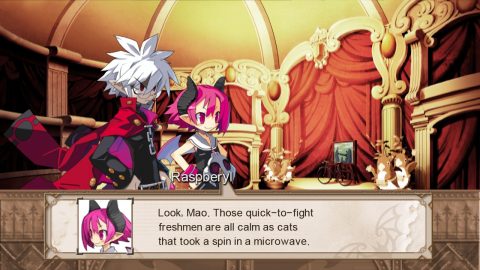 Like all of the previous games, the story really just kinda meanders around, as Mao threatens to destroy his father, and Almaz crushes on the Princess (and tries to turn back into a human.) The dynamic between the characters is actually pretty similar to the first game, with Mao taking on the role of Laharl, Almax being the Flonne equivalent, and Raspberyl kind of being like Etna, even though she’s not quite as involved in the main story. Since Mao is obsessed with video games and anime (he wants to become a hero just because he’s read about them in manga), there are a number of amusing references, like parodies of Gundam Seed. Laharl, Etna and Flonne, as well as Axel, also somehow stumble into the story at a late point, and the join the characters in the final battles, although they’re not as tightly integrated as, say, Etna was in Disgaea 2.

The systems have also seen a considerable overhaul. All of the stuff with courts and sinners from Disgaea 2? Completely gone, with nothing quite in its place. However, some of the character building mechanics have been changed. Although you can still strengthen magic and skills by repeated use, you can also build up their powers and learn new attacks by spending Mana. You can also learn Evilities (called “Mabilities” in the Japanese version), various minor enhancements that depend on the class. This allows for more focused customization. Also new is the Class World, administered by a afro-wearing prinnie. This is similar to the Item World, except you now enter one of the statistics of a character (“strength”, “defense”, etc.) and fight to level them up.

Also new are classrooms and clubs. You can assign various characters to different clubs, which grant them various stat boosts and bonuses. Characters in the same club also have a higher chance of executing combos together. Furthermore, the class president can use the magic spell of any character they’re standing next to. However, the master/pupil relationships of the previous games are gone entirely, so the president does not permanently learn the spell either. 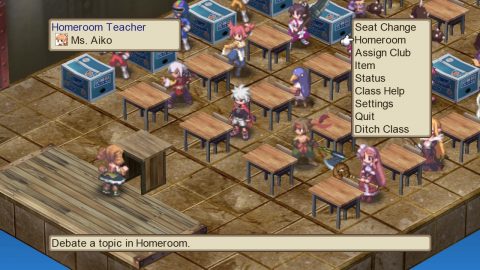 The Geo Stones have been replaced with Geo Blocks. Although they basically function the same way, they can be picked up as long as they’re not connected to blocks of the same color. If you pick up a Geo Block and toss it on another Geo Block of the same color, you’ll destroy all of them that are connected, damaging anything that’s standing on top of them. There are also more throwable items on the battlefield, including exploding barrels. Also new is the Magichange option. Monsters can be transformed into a super powerful weapon and can be wielded by any human in the same club. However, it only lasts for a couple of turns, and the monster is sacrificed for the rest of the battle. New units include a cheerleader, and a Masked Hero, who dresses like a Prinny-style superhero.

Like Disgaea 2, there’s a brief animated introduction, done in HD. It also features a catchy vocal song and a zombie-like dance, undoubtedly inspired by the phenomenon introduced by The Melancholy of Haruhi Suzumiya. Most of the music is, once again, pretty typical of Tenpei Sato’s stuff, although the vocal song used in the main schoolyard (“Extreme Outlaw Overlord”) is curiously addictive. One of the only major benefits (if you can call it that) of being on the PlayStation 3 is the inclusion of downloadable characters. For a few bucks, you can grab a handful of new characters, including more folks from older Nippon Ichi titles. Also, like the portable renditions of the first Disgaea, you can speed up unit movement and turn off special attack animations, making for a much quicker game. 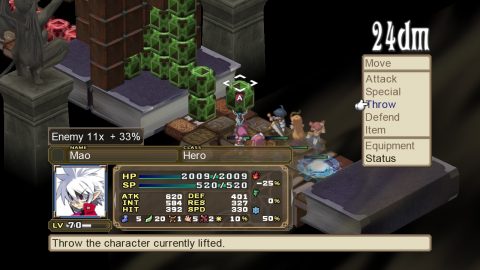 Even though it feels like a huge waste of PlayStation 3’s power (and it even has the gall to slow down in certain stages), Disgaea 3 is even more polished than the previous games, and finally gets back on track with the storytelling the made the first such a madcap classic.