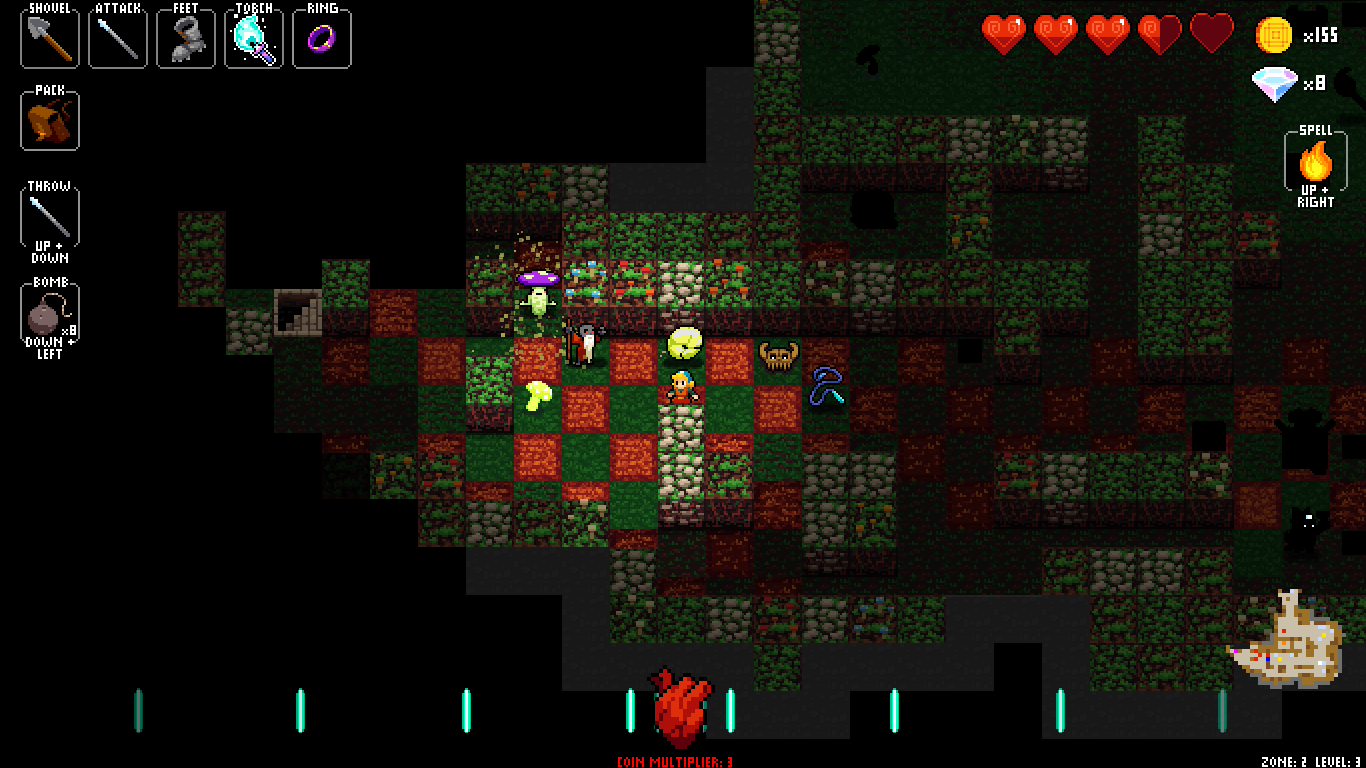 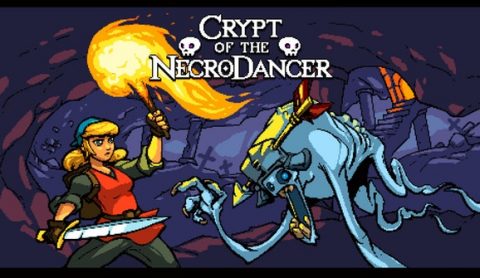 Indie developers love making roguelikes, and more than that, they love putting twists on the roguelike formula. Some gimmicks work better than others, many fail, but you sometimes find a gimmick so natural feeling that you wonder why nobody else has done it before. Crypt of the Necrodancer is very much one of those games, a peanut butter and chocolate mixture of roguelike dungeon crawling in a rhythm game format. That doesn’t sound like a good idea on paper, but in practice, it’s incredibly effective. 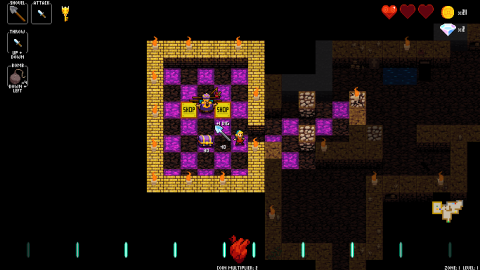 The game’s story follows Cadence, a young girl looking for her missing father, who left to find a mysterious treasure in a deep, dark crypt. Cadence instantly dies upon finding the crypt, but the titular Necrodancer casts a spell on her heart that brings her back to life, heart taken from her and beating with a magical piece of music. Now, she needs to explore the crypt and find out what happened to her dad and find a way to undo the spell. It’s a simple narrative that gets things going, but it’s told with two other characters as well, plus has a DLC story about a vampire woman fighting a scientist trying to use the treasure everyone is looking for. There’s more thought and emotion in it than necessary, and it’s appreciated. These scenes are also told through cool comic style animated cutscenes, though using pixel art over traditional illustration is a tad distracting due to blocky bits on what should be smooth lines.

The game proper is like a normal dungeon crawler, except everything in the dungeon moves to the beat of the music. A little meter plays at the bottom, helping you figure out the exact beat the track uses, and you have to move and act entirely within that beat. You gain extra coin drops through a multiplier that builds the longer you keep the beat, and not staying in that beat is often penalized with short freezes. You only need to use the arrow buttons, letting you move in four directions and act by simply moving into the thing or creature you want to interact with or attack. More complicated actions, like using items, are simply handled by pressing two directions together. 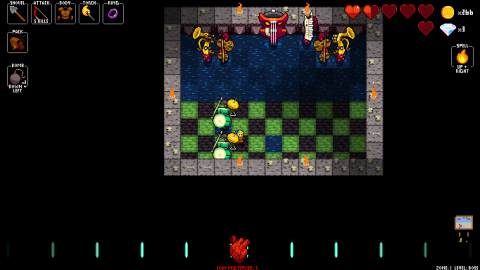 This control scheme is simply brilliant, and it works perfectly with the simple maps and variety of monsters on display, ramping up difficulty with each new floor and zone. Necrodancer just explodes with life, as the dungeon floors create a checkered shifting light show that doubles as helping you keep track of spacing between you and enemies. Monsters all have special patterns that become visual chaos when paired up with other creatures, forcing you to think on your feet and find your moment to strike. The default score is some truly fantastic electronic dance stuff that fits the style of the game perfectly, but you can also upload your own tracks for some added fun. Items and monsters all look very distinct and colorful, so you can easily have an idea of what you’re dealing with from a glance. The game is simply polished to a lovely sheen, making the most out of these original mechanics and structure. Even the item shop is handled masterfully, as you can hear the shop owner belting in the distance when you start getting neat his gold brick surrounded space.

The rhythm game mechanics mesh well with the rhythm of play of the roguelike base as well. Roguelikes tend to focus on quick deaths and fast runs, mirroring the repetition of the rhythm genre, so Necrodancer carefully entwines them into an elegant form that uses variety to keep things addicting. Instead of overly large maps that can punish players for exploring them too long with super strong monsters or hidden ambushes guarding loot, Necrodancer kicks you to the next floor when the song ends. It keeps things short and sweet, and gives a bit of a rush in the moment because you’re always aware you only have so much time to save someone in a cage with the right key to unlock new features in the hub and playable characters, or possibly find a sweet new weapon that will help make a breeze out of an upcoming boss fight. This makes Necrodancer feel less punishing and more thrilling, with each floor only taking a very short few minutes to traverse, oozing with monsters you have to maneuver around on the clock. It hits a sweet spot few of its kind have found. 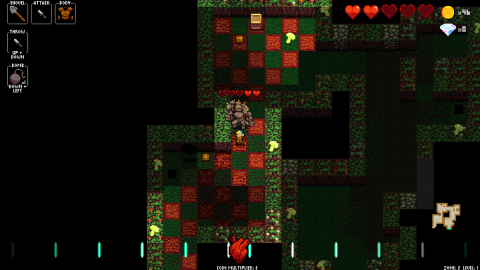 It doesn’t fix issues fundamental to the roguelike genre, though. There’s always a point where the repetitive cycle wears thin, and shorter floors doesn’t necessarily mean less burnout. If anything, you might encounter it faster. You see more of the same sooner, which can really take the wind from one’s sails, and the rewards from using diamonds in the hub shops aren’t that exciting (mostly new loot to find in chests). The graphics also feel a tad lacking compared to some of its contemporaries, especially Enter the Gungeon. The designs are all great, but many of the monster designs fail to fit with the theme. For every minotaur with harp horns, you get at least eight skeletons with generic shields. Others are too gimmicky, especially the bosses, which are hard to take seriously when they include a gorilla that plays the bongos and grim reaper except he sometimes makes metal hand signs in his idle pose. The base for something fantastic is there, and kudos on making that base, but Necrodancer leaves something to be desired – something maybe a sequel could give us. It’s definitely worth your time as it is, though, and the game still gets regular updates to this day.