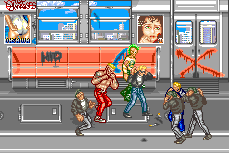 By 1989, Konami had come upon major success with the Teenage Mutant Ninja Turtles arcade machine, a good-looking, fast-paced brawler based on the then-hit animated series. More importantly for the rest of Konami’s beat-em-ups, however, it introduced a certain style that they’d follow with time and time again, including the ability to have four players at once. Crime Fighters is one of Konami’s other brawlers from that year to have four player support, although in terms of gameplay, it’s quite a bit different from TMNT. For one thing, it’s actually pretty boring. But, we get ahead of ourselves. 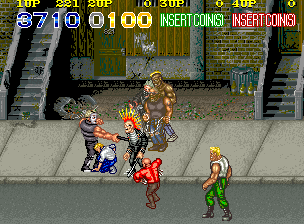 The plot involves kidnapped women. Plural, in this case, as some guy the game only refers to as “a fat toad” has kidnapped a bunch of ladies while his thugs do vaguely defined bad things. Obviously, that just won’t do. Your heroes are unnamed and are almost completely identical in terms of not only looks, but moves as well, with the only thing really changing between them being the color of their pants, hair, and skin. Unlike Bayou Billy and S.P.Y., Crime Fighters isn’t nearly as ambitious, so it’s nothing but a beat-em-up all the way through. Compared to the more frantic pace of something like Turtles, it’s a much slower, more methodical game, one that feels a lot closer to something like Double Dragon, than anything.

You have one button for punching and one for kicking, and by pressing both buttons together, you can perform stronger attacks like flying knees and roundhouse kicks. You can also grab enemies by hitting them a few times, leading into a few other moves like kneeing them in the face, or rarely, hitting them in the privates, complete with a “ding!”. That may be the best part of the entire game. To Crime Fighters‘ credit, there is a certain brutality to it that you’d expect from a game about beating people up, even more so than most beat-em-ups. There’s a lot of weapon combat, and in something of a rarity for this kind of genre, you’ll even pick up the occasional handgun. You can also kick enemies while they’re knocked down to inflict some extra damage, which makes dealing with some of the crowds the game sends at you a little easier.

Unfortunately, simply put, the game is just no good. From the start, the hit detection always feels somewhat suspect, meaning that there will be times that a kick you thought hit somebody will harmlessly pass right through them. The enemies, however, never seem to have a hard time hitting you, meaning that finding out who will actually get the first hit in between you and your average mook seems to be a matter of luck. It’s even worse if you’re surrounded by multiple enemies, as they’ll try to gang up on you and force you into a state where they can knock you down again and again, slowly whittling away your health. Clearing out just one screen of enemies can be a slog. When you factor in eight whole stages of this mess, the experience is nothing short of unbearable. 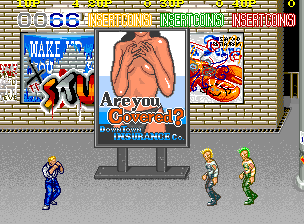 The bosses aren’t much easier, since they can basically hit you from even further away than the standard mooks, not to mention they get much more health. Even if the collision detection worked, and the difficulty wasn’t completely stacked against you, it’d be dull at best, something that can ruin a beat-em-up even before you’ve picked up your first pipe. About the only thing that makes the game somewhat interesting is its somewhat goofy sense of humor. There’s a few points in the game where things can fall upon your character, leaving them cartoonishly squished for a few moments. And then there’s the ending, if you can stomach the game for long enough. It’s short, but it has a line so goofy that it’s hard not to end up laughing at it, at least a little.

The game, at the very least, looks better than it actually plays, although it’s nowhere near the style oozed by something like Teenage Mutant Ninja Turtles. Given the sorts of graphical feats being seen in the arcades in 1989, it looks heavily outdated even for the era. Most of the sprites are pretty small, although the game does offer a pretty wide variety of different enemies. There are a few cute touches here and there, like the way the mooks clad in leather jackets are constantly fixing their hair as they move around the screen. The backgrounds are also reasonably well-drawn, with a lot of pictures of scantily clad women, for whatever reason. 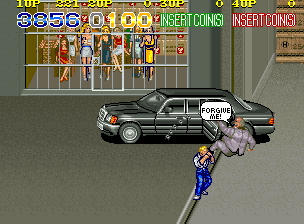 Overall, Crime Fighters is a dull, dull brawler that’ll bore even the biggest fans of the genre before they even finish the first stage. Compared to games like Final Fight and Teenage Mutant Ninja Turtles that were redefining the genre, Crime Fighters feels more like a game from at least three years before either of those games. There’s pretty much nothing interesting or redeeming about it, aside from the fact that it thankfully got a much improved sequel.