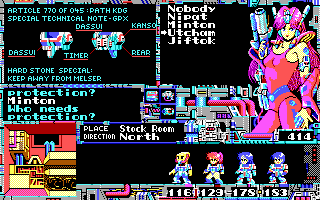 The second Cosmic Soldier game completely surpasses the original. The graphics have improved, with much more detailed characters and enemies as opposed to the blobs of the original. The game now has music, although fairly repetitive and annoying. It is worth noting that the PC-8801 version of the game came with a cassette tape OST with arranged versions of the game’s music that sound great. The interface is better, the designers gave more space for the first-person view and battle screens, and Kayla, your android companion, takes up much less space this time. This game has even more of an “every hall looks alike” problem than the original. In the first game, the halls were repetitive, but the graphics differed from dungeon to dungeon. In Psychic War, every dungeon has the same graphics for the halls, but of a higher quality than the original. It’s still ugly and confusing for the player, but much better than the original. The graphics for characters and enemies are very well done, with some nice anime-style graphics in the FM-77, PC-8801, MSX2 and MS-DOS versions. The MSX version attempts this, but fails miserably, resulting in vaguely anime-style hideous blobs.

The story is set 127 years after the original game, in the year 3657. The Quila Empire is up to no good yet again, having developed a mechanical device that can produce psychic waves (I’m going off a babelfished translation of the game’s storyline, so this is a guess). The alliance wants to avoid full-scale war with the empire, and has discovered the planet where the Empire’s headquarters are located. Their HQ is one of the space stations orbiting the planet, but it’s unclear as to which one it is. The alliance sends off an operative and an android off to the neutral space station of Samar, which acts as a hub to reach the other stations on the planet, where they can then infiltrate the other space stations and destroy the main base of the Quila Empire. The plot is slightly thicker in this one and it’s not that bad of a story, but the game doesn’t expand on it very much.

A fairly bland main character, whose name is up to you (the MS-DOS version lets you name every character you acquire). He’s always stuck at the back of the party, and is the only person that can use the teleporters. His abilities don’t grow as well as his companions, so he starts to lag behind them later in the game.

Early companions from Samar that can seal enemy psychic beams which makes them fairly useful. Minton has more HP, while Shulosu has more ESP. I prefer Minton because she’s a somewhat attractive girl, while Shulosu is an ugly bald man.

Most common companions in Samar. Jiftok is the one with the Abe Lincoln beard, while Pospopoi is the green-skinned, alien-looking one. Both don’t add anything to the party as they lack abilities, but I ended up using Jiftok for most of the game.

Found in Sivad, the first dungeon. Has a suction ability, an okay character, but the problem is that she has the lowest initial HP out of any character, so she constantly dies.

Can be found in Zellwall, the second dungeon. Has the ability to duplicate enemies, which she can use during conversation to turn herself into an enemy robot. The duplication ability is worthless, I’m thinking it’s a bug in the DOS version, but it has the habit of turning the entire party into the enemy robot. It also stops the natural regeneration of HP and ESP, which forces you to rely on healing items.

Found in Rusteck, he has some sort of hyper beam that does more damage than the usual psychic attacks, but he’s far too weak for the dungeon that you first find him in, but he levels up very quickly.

Has the “mind jump” ability, which is supposedly very important. I never found him and have no idea if that’s the case.

A giant bunny-man. You can free him from jail on Sivad. He has the ability to heal the party, which means you never have to use healing items again. Not that strong, but levels up fairly quickly.

A very strong character who you can recruit on Celtac. He has plenty of abilities, including a hyper beam, which makes him a good replacement for Gorrfrys.

Starts off stronger than Pionn.

The battle system has been revised. While the original had turn-based battles, the sequel has a “tug-of-war”-style real time battle system. Battles are a clash of psychic energy between your party and the enemy. You simply need to hold the space bar, as you try and push your energy toward the opponent and strike them. You also can either use a shield to block, or a suction ability to suck up their power for your own. Your party attacks using the total amount of ESP, while the character in front takes damage from the enemy attack. If a character runs out of HP, they die for good, while if the party runs out of ESP it means the end of everyone. Getting caught off-guard by an enemy makes it much harder for you to try and fight back. While it may seem that the battle system is just “holding down the space bar”, it’s actually complex and well-designed, and no other game of its time had such a system. A few enemies can only be defeated by using a turbogun, which adds to the flavor.

The conversation system is back, and has been improved. There are two types of people to converse with, fellow psychics, or enemy robots. Conversing still occurs when an enemy decides to surrender, and you have the option of finishing them off or sparing them. Psychics need to be recruited, as many have special abilities that are necessary to reach the end of the game, or you can talk to them and get a few hints. The enemy robots tell you information about the dungeon you’re in, such as the number of floors, but you can’t turn them to your side. Overall, the conversation system isn’t really that complicated, but it’s cool to see that Megami Tensei wasn’t the only RPG that had this idea.

Kayla, your android partner in this game, has fewer abilities than the android in the original, because fellow psychics have filled in some abilities that the android in Cosmic Soldier had. Her duties are more important now, she has 3 parts, one that can decode computer transmissions to get you passwords, one that can help you find where you are on the map, and another that selects the correct map for each base. On the subject of maps, you find maps strewn about each dungeon, but the in-game map system is hard to see. Due to the game’s repetitive graphics, it’s impossible to really find where you are, which means you’ll be forced to either map out the dungeons yourself, or take the wimpy approach and look at maps for the game on Japanese websites. Mapping the game on graph paper isn’t really that bad, it’s just a bit unusual because no game nowadays really requires that.

Overall, the second Cosmic Soldier game is a good, although difficult, game; and it’s not for everyone. Part of the fun of this game is figuring out all of the secrets on your own and the sense of accomplishment from having conquered the game. For those who want to see the transition Japanese RPGs made from western-style to their own style, or those who can deal with the aged gameplay and graphics, Psychic War is highly recommended. This game screams for an enhanced remake, but it doesn’t seem like Kogado has paid any attention to this franchise. The game is currently abandonware, and it’s easy to find with a quick Google search.

The game was published in the US by Brøderbund for the IBM-PC. The game underwent some minor changes. Some names for characters and items were changed, the game removed the “2” from Cosmic Soldier 2 to hide the fact that the game was a sequel, and Kayla is no longer dressed like a sex worker. Translation and porting was done by Ray Nakazato, who was at one point the president of FeelPlus studio in Japan, and has worked on the game Lost Odyssey.

The game has a good sense of humor and pop-culture references. The three cartridges for your turbogun are named after Japanese monster movies: Gamera, Rodon, and Mothra. Much of the game’s text is delivered in a style similar to the title characters from Bill and Ted’s Excellent Adventure. For example, when an event such as breaking into a safe fails, you’re told that it’s “Bogus!” or “Heinous!”, or having successfully acquired healing items is “Bodacious!”. Overall, the game doesn’t take itself too seriously, which suits it well.

The music for this game was composed by Kyoko Sakai, who isn’t a well-known composer in America because he hasn’t worked on any games that have been localized here. The in-game music is well-composed, but sounds ugly because of the hardware. The arranged version that came with the PC-8801 version sounds great and does the compositions justice. 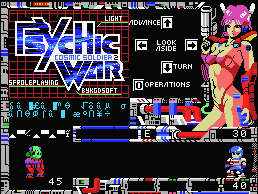 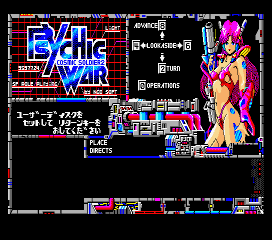