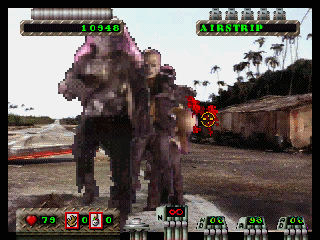 Corpse Killer is another largely insufferable FMV game from the creative Digital Pictures team, who were nothing if not prolific. The most appealing feature of this game is, by far, the storytelling. It’s a low-grade B-horror movie, and the cast seem entirely aware of it, which only adds to the charm. As a lowly army lieutenant sent in by the U.S. Pentagon, your mission is simple: infiltrate an island of the undead, rescue your superiors, and stop a psychopathic mad scientist named Dr. Elgin Hellman, played by the delightfully crazy, and sadly late, Vincent Schiavelli. The scenes starring Hellman are a pure delight. Schiavelli is off the rails here, and revels in playing one absolutely insane man. After creating Project Manpower for the military, a brilliant idea to fill the barracks of the Army using the ranks of the undead, he went AWOL, and started making an undead army for his own use, supposedly to conquer the world. Previous attempts at capturing Hellman have gone poorly, since the Lieutenant’s entire squad are being held hostage on ‘Cayman Noir’ island. Unfortunately for the Lieutenant, he gets bit by a zombie soon upon arrival, which leaves him infected with the poison that will soon make him one of them.

Fortunately, he’s got a rad dude named Winston Croft to help him out, who puts on one of the more hilarious Jamaican accents imaginable. (His actor might be a native, it’s hard to tell.) Winston puts his familiarity with voodoo rites to not only create Datura Plant antidote to keep the Lieutenant alive, but also to predict the outcomes of the future, in limited doses, using a plant of bones. What does Winston want in return? Help finding lost gold to buy a Hummer. That’s about it. You’re also accompanied by a intrepid reporter named Julie, who’s out to make a scoop by exposing Project Manpower and also being the obligatory flirt. Beyond her charming dialogue, she’s largely an inoffensive(and useless) character, naturally put on display into a bikini after the player completes the game. The dynamic between Winston and Julie, especially their ongoing tug-of-war over the player and his zombie slaying skills, is one of the more amusing things to watch.

Oh right, there’s gameplay too, or what passes for it. From the hub, the player can choose to either take on the main quest, or prepare by doing side quests for Julie and Winston, or ‘grinding’ for Datura and AP bullets, both kept in limited supply. Normal bullets are unlimited, but they won’t harm the Lieutenant’s zombified friends, or certain high-grade undead. Datura mixed with APs are the best bet, since they do the most damage. Once the stages begin, the screen scrolls from left to right, and the player just has to kill everything in sight. There are different ‘types’ of zombies, such as the Serial Killers, ‘Deadboyz’ (ex-gang members), and the ‘Electroposse’: ‘Electrocuted mass murderers. where do they dig these guys up?!’ Beyond visual differences, they all attack exactly the same. Most zombies fall to a single bullet, but there’s certain elite zombies that only die to AP/Datura bullets, and then the black/white glowing zombies that either harm the player or kill everything on screen, depending on the timing used when killing them.

That’s really all there is to the game, beside the ‘boss fights’ with the captured soldiers, who run much faster, do more damage, and charge directly at the player. After taking enough damage, the stage ends, and Winston brings them back with Datura potion. Julie and Winston have two quests each, which mostly just consist of a single level. Julie’s stages reward the player with some backstory about Project Manpower, and Winston’s just allow him to revel in finding large stashes of lost Caribbean pirate gold. In addition to stages, the hub map also lets the player view assorted cinemas, mostly backstory about the plot, as well as Winston’s predictions, and hints on gameplay. The scenes starring Hellman are always the highlight. The primary objective is storming Hellman’s fortress, which has to be done four times: each requiring the player to rescue one of the Lieutenant’s lost comrades, ranging from low-ranked soldiers to the Captain. Each mission gets harder, with more and more hordes of undead, and the zombified soldiers requiring more Datura bullets to bring down. On occasion, after clearing the main stage, the player has to defend the local graveyard: if the player fails, they have to do a zombie-filled stage, and likely take lots of damage in the process.

The differences between the original releases and the enhanced Saturn version go a ways towards making the game more playable, but not by much. (There are also 3DO and PC/MAC versions, which are based off the Sega CD original, though they have better video.) Called the “Graveyard Edition” (and boasting to be one of the top 20 games of the year, according to someone), the gameplay is made full screen, which is always a big help. The speed of the levels scrolling is faster, but the zombies also move faster to make up for it. There’s also ‘full screen’ zombies, which really just amounts to a giant face filling the screen, which takes up entirely too many bullets to get rid of. There’s also occasional power ups which trickle down during stages, which either give the player more health, more AP bullets, or even harm him. After clearing all four fortress stages, the player then has to take on ‘Hellman HQ’. A difficult level with a fairly dull final fight; just a giant face spitting out an endless array of zombies, displaying Hellman’s face decaying as the fight goes on, until he drops dead.

If it was just the gameplay, this would be a total waste, a completely forgettable light-gun-shooter-without-the-light-gun which can be extremely repetitive at best. Factor in the campy acting and hilarious plot, though and it becomes a morbidly amusing keeper.