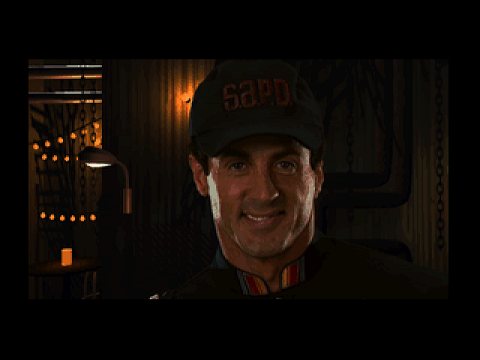 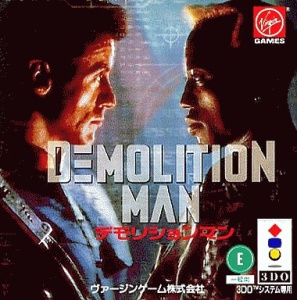 In the intro to Demolition Man, John Spartan (Stallone), “the 20th century’s most dangerous cop”, bungie jumps out of a helicopter into a burning building to take down Simon Phoenix (Wesley Snipes), “the 20th century’s most ruthless criminal”. Their battle eventually leads to a massive explosion that supposedly causes the deaths of hundreds of hostages that Phoenix had been holding, unbeknownst to Spartan. For this, Spartan is accused of mass manslaughter and is sentenced to 70 years of imprisonment in cryostasis (while we’re on the subject, why would you imprison someone in cryostasis as punishment? Isn’t the purpose of incarceration to allow the criminal to reflect on their crimes and understand price of disobeying the law? Freezing someone in cryostasis makes it seem like your sentence lasted an instant. Seriously, WTF?) About 35 years later, Simon Phoenix is mysteriously released from prison with a horde of implanted skills and intelligence, making him the perfect killer.

In the 35 years that have passed, crime and all other harmful activities and habits have been abolished (right down to eating salt or having sex). In this ideal utopia, people have become soft and kind, and humanity is no longer capable of dealing with a threat like this. Thus, the only solution is to thaw out Spartan and send him after Phoenix.

The first iteration of Demolition Man in game form was developed by Virgin Interactive and appeared on Panasonic’s ill-fated 3DO about a year after the movie’s release, and like most 3DO games, it was pretty terrible and way too reliant on the novelty of FMV featuring digitized actors. Surprisingly, Stallone and Wesley Snipes actually did some mo-cap for the game, the lion’s share being Stallone’s, looking hilarious as he rolls, runs in place, grins ridiculously at the camera, and all around pretends to interact with an environment that’s obviously not there and does horribly at it. 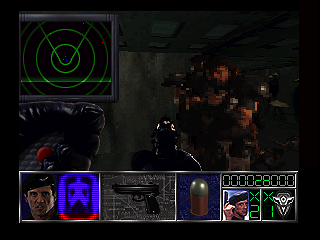 The biggest problem with the game is that it tries to be about 5 different games at once and fails miserably at all of them. It starts out as your generic light-gun shooter in the vein of Time Crisis, with very badly dressed, digitized studio monkeys with guns jumping out from behind obstacles to shoot or throw grenades at you. These light gun stages don’t scroll, either. They remain static and once you’ve cleared a screen you just move on to the next, with a little cutscene of digi-Sly doing random stuff interspersed with actual movie footage to segway into the next gameplay area.

At the end of the first light gun stage (and the end of every stage hereafter), though, the game throws a curve ball at you. All of the sudden, it looks like you’re playing Mortal Kombat and you and digital Wesley Snipes start punching and kicking each other. These 1-on-1 fights are really horrible, boiling down to what’s essentially a glorified rock/paper/scissors match. Your three action buttons make Spartan punch high, low and kick. Phoenix has the same set of commands. Trying to simply beat on Phoenix will get you killed really fast. You pretty much have to sit there and wait for Phoenix to attack. You have two routes to take when reacting to Phoenix’s actions. You can beat Phoenix’s attack by using the appropriate counter (kick beats high punch, high punch beats low punch, low punch beats kick), or you can use the same attack as Phoenix to deflect his attack and stun him for a second. You can also duck and perform sweeps and Mortal Kombat-style uppercuts. The uppercut doesn’t work too well, but the sweep is actually really useful and Phoenix will just stand there and take it 90% of the time. You can also jump, but the only purpose this serves is to dodge the sweep. Any way you slice it, both you and Phoenix have a lot of health and each successful attack does a minuscule amount of damage, so these fighting scenes are going to last a LONG ASS TIME. 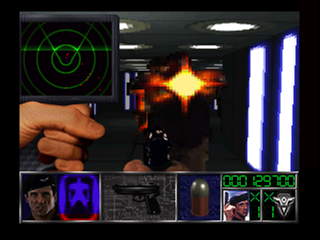 The second stage drops the light gun motif and opts for FPS gameplay. This involves you going down a bunch of identical looking corridors searching for Phoenix and shooting random thugs in between. This wouldn’t be too terrible if it weren’t for the fact that during these sequences, Spartan is holding a radar that takes up about 1/3rd of the fucking screen. All this radar shows are the enemies (red dots) and Phoenix (yellow dot), not the terrain, so it’s essentially useless on top of obscuring the bad guys from sight. You also only have one gun (a pistol) and some grenades that tend to hurt you more than your enemies.

Finally, there’s a car chase sequence that functions as the most boring racing game of all time. You’re driving down the straightest highway ever built (in Southern California, no less), dodging random cars and trying to catch up to Phoenix. As long as you don’t hit too many other cars, you’ll catch up to Phoenix, after which another 1-on-1 fighting sequence begins with you and Phoenix fighting on top of your cars.

On the bright side, thanks to the 3DO’s advanced (at the time) media compression techniques, Demolition Man has lots of perfect-quality voice samples and music ripped from the movie, and the clips from the movie are far less compressed and artifacted than the usual CD fare. Still, this game really sucks. The only positive thing I can say about it is that it’s ambitious. It tries hard to capture the intensity of the movie and make itself feel epic by going through several styles of gameplay, but it ultimately fails.