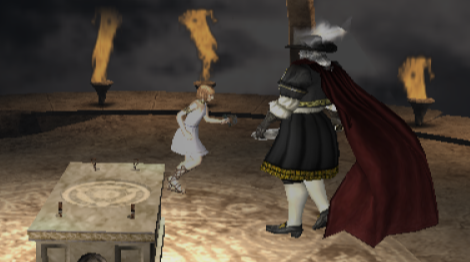 After Human folded and ASCII published the last Clock Tower sequel/spin-off game, a familiar but unlikely Capcom stepped up to the plate, along with Hudson Soft, and started working out the 3rd and “final” entry of the Clock Tower saga.

Deviating completely from the past games (which essentially concluded their respective stories), the player is put into shoes of a new girl, Alyssa Hamilton. She’s a shy individual whose mother asked her secretly via mail to live in shadow of anonymity until her 15th birthday. Foolishly ignoring the letter’s unlikely warning, Alyssa travels to her former boarding home in search of her mother. During her investigations, she accidentally steps into a magic trap that sends her back into London, during the times of World War II. (Yes, that escalated very quickly!) 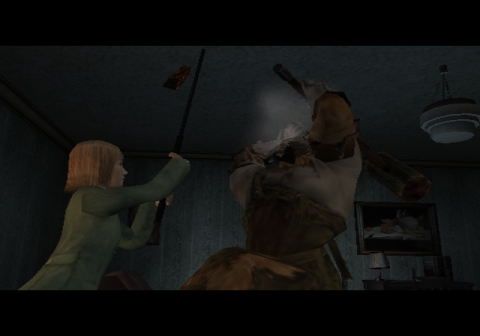 Finding sanctuary in the middle of “The Blitz”, Alyssa witnesses the murder of a little girl at the hands of a monstrous individual, who dexterously wields an unnervingly large hammer. Noticing Alyssa’s presence, he starts chasing her. This crazed murderer is one of the new kinds of “subordinates” (as Stalkers are called here). This first guy is (obviously) named Sledgehammer, but others include Chopper (an ax-wielding lunatic), Corroder (an acid-bath maniac), the Scissors Twins (unrelated to the past games, technically named Ralph and Jemima) and Lord Burroughs himself, ascendant of the “Barrows” family. The spelling of the name has been altered for unknown reasons, maybe they wanted to differ a bit from the source material, but it may also just be a localization inconsistency.

Lord Burroughs himself is a believer in “Entities” (which are apparently what defines every Stalker with supernatural abilities through the saga) and wants to become one. Before using his daughter in a ritual to attain this, she dies by accident, prompting him to become extremely ravenous for power and start killing. Shortly thereafter, a flock of people from the town got a hold of him and eventually executed him via the clock tower of his own mansion (following the Barrows tradition, “Time Will Cause Adherence”, making the clock’s gears the bane of every Stalker in the family).

While Burroughs is somewhat of an ancestor to Alyssa, she belongs to a “Rooder” lineage (the same as his deceased daughter) that’s able to vanquish and sentence these Entities via holy weapons. These include such implements as a bottle of holy water, which, apart from damaging the Stalkers, can turn into a bow to further punish them. 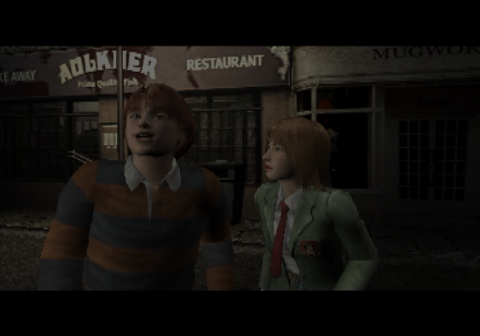 Clock Tower 3 plays completely different from any of its predecessors. This isn’t inherently a bad thing, as such evolution can sometimes save a franchise from stagnation. Here, the game departs from the tradition of point and click adventures, and instead gives the player full control over the character, making it feel a lot like Resident Evil. While this doesn’t sound too bad on paper, in practice, the transition is pretty clunky. Alyssa can be controlled via one of the controller’s sticks, making her able to move freely within the 3D environments. Instead of scanning the room with your eyes for items, you can walk up to places and press the “action” button in order to interact. Finding places to hide or relevant hotspots can sometimes be a chore, forcing you to walk around so the camera moves just enough to find stuff lying about. At least most objects will sparkle, so you know they can be picked up.

Unlike previous games, sometimes hiding spots are not good enough, and you’ll often be forced to use items. While this is not necessarily new, as later Clock Tower games relied more on using the environment to attack or having you grab items (Clock Tower 2) or carry guns (Ghost Head) in order to fend enemies off. However, hiding spots were always effective unless there was a scripted event associated with them. Shooting and hitting were ineffective to kill your target, but instead allowed you to stun them so you could find a proper hiding area. In Clock Tower 3, you are equipped with holy water to help you fend off the bad guys, helping you to make some space between you and the current Stalker. It’s needed because the Stalkers become increasingly faster and more annoying as the game progresses, and they’re more aggressive in searching hiding places if they’re directly on your tail. 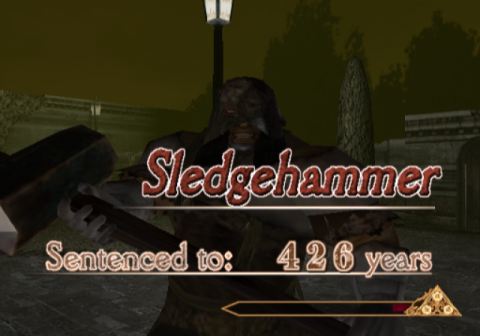 The Panic mode works differently than before, as it’s measured by a “Panic Meter” displayed on the side of the screen. Whenever Alyssa is struck by a Stalker, jumped on, scared by the environment or groped by a ghost, her meter will raise until she breaks down. The next scare will be too much for Alyssa, prompting her to automatically run away, aimlessly and out of control (or sometimes she’ll freeze in a single spot, becoming an easy one-hit kill for a Stalker). If she escapes to safety, the Panic Meter will start depleting, letting you recover control when it’s over. It’s nice that they tried to keep the “Panic” thing going on and give it a little twist, but before it was used to save yourself from certain death instead of being a messy way of putting you in danger.

Then comes the boss battles. Each Stalker (including Burroughs himself) is to be disposed of. Your holy water will turn into a bow used to pass “Judgement” on the Stalkers. In a fixed arena, you’ll don this Rooder weapon and engage into some of the clunkiest battles in video game history. The viewpoint will switch to an over-the-shoulder view as you try to hit them with your arrows. The Stalkers will no longer run or pose a threat like before, instead they’ll wobble around, trying to corner you. 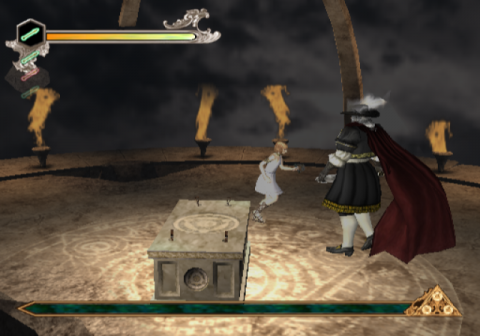 Compared to previous Clock Tower games, Clock Tower 3 is also incredibly linear. There are interludes in the mansion, and each “level” takes place in different places and time periods, but it’s completely missing the branching paths and alternate endings that previously typified the series.

Being a release for the PlayStation 2, Clock Tower 3 shows substantial graphical improvement over the past games. Characters are better defined, the dirty backgrounds live up to the era the game is taking place in – whilst mostly generic England settings, they still manage to nail an eerie feeling – and the cut-scenes are very well executed, if too sadistic sometimes (Sledgehammer’s and Corroder’s intros will stick with you for quite a while). The Stalkers themselves are very well animated and somewhat scary – desperate to kill Alyssa, they run quickly (almost in an erratic manner), laughing all the way while trying to attack her, and their cutscenes are downright disturbing when they’re not too cheesy. Also, there is tons of concept artworks for each of them, unlockable in-game, showing the potential the team had when bringing this game to light.

The sound works fine, as while some of the songs are immensely atmospheric, others are downright generic (and that damn boss battle theme thing feels like a 15-second tune that repeats over and over). The “Panic” cue is clichéd with capital “C”, with the Psycho shriek thing going on, but admittedly it’s appropriate. If anything else really improved with this game, it’s the voice acting and cutscenes. Kinji Fukasaku (of Battle Royale fame) directed the cinemas, and he does a pretty masterful work of making every event believable, and the voice acting fits every scene. The Stalkers themselves sound eerie and cruel, fitting their roles perfectly when murdering the victims, or enjoying the distress they put Alyssa through whenever they appear.

Capcom and Hudson’s joint venture to bring the third and “final” chapter to life of this beloved franchise was an unlikely experiment at the time. Indeed, rather than iterating on the style of the previous games, they chose to create something more along the lines of PS1/PS2 horror games. Fans of Resident Evil decried the lack of action while fans of Clock Tower decried it as not really a true entry in the series. Even if it sold poorly and essentially spelled the end of the franchise, it had somewhat satisfactory results. Like the PS1 Clock Tower games, this one is another interesting if flawed experience. Nevertheless, with a single ending, a more straightforward run, and tons of curiosities to be explored, this game still stands strong as an unlikely gem among horror adventures.