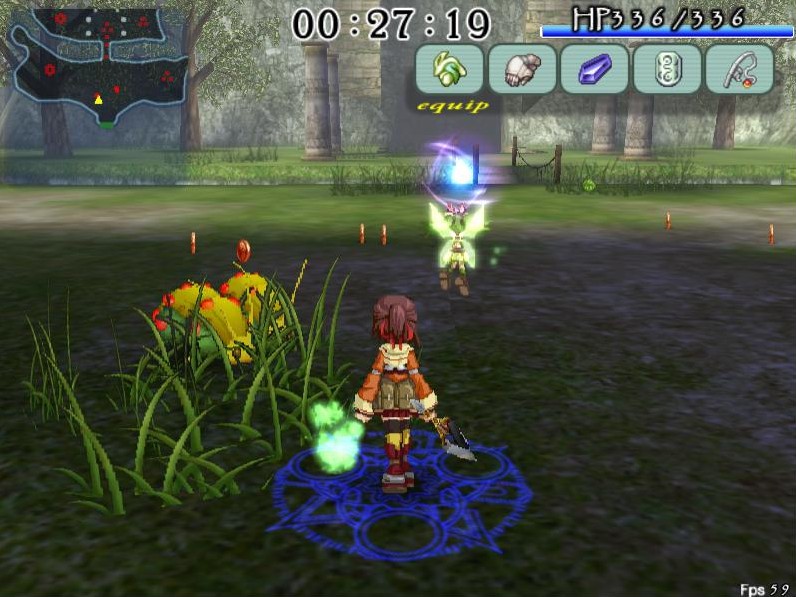 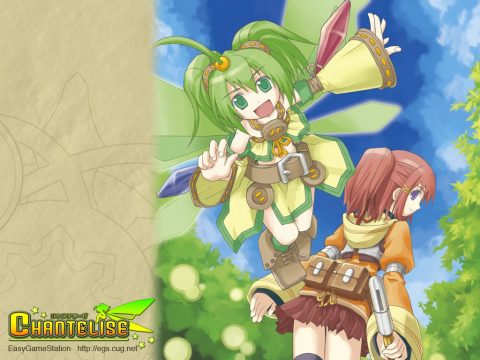 EasyGameStation is a truly remarkable group, and their game Chantelise achieves a level of quality that puts most of my professional endeavors to shame. This gem of an action adventure game was mostly put together by the 3 members of EGS:

Chantelise seems like a remarkably ambitious project for EasyGameStation; this is the first EGS game to feature the circle’s original characters and plotline. EGS has been melding sprite animated characters on 3D polygonal backgrounds for quite some time with their previous releases. Compared to Duo Princess, one of EGS’ earlier releases, Chantelise features larger sprites, higher resolution textures, and noticeably more responsive controls. The scope of the game is pretty huge too. Expect to spend at least twenty hours on your first play through, plus some time to go back and get any extras you missed.

The story starts off as a tale of two sisters. Their mother had always warned them never to go outside on nights when the moon is red, or else they’ll be cursed by a witch. As if possessed by a force greater than herself, Chante ventures out into the forest on a night the red moon is redder than it’s ever been. Worried sick about her big sister, Elise goes after Chante. The next morning, the two wake up in the middle of the forest, with something markedly different about Chante; she’s been transformed into a little fairy! Elise grabs a sword and the two head out for a small village nestled amongst ancient ruins. Word has it that somewhere amidst all these ruins is a witch. Is it the one who put the curse upon Chante?

With her brash attitude, selfishness and small size, it’s hard to believe she’s the older of the two sisters. Granted, her diminutive stature is due to her being transformed. As a fairy, Chante gains the ability to harness the power inside elemental gems and cast spells. She can absorb more and more gems into her spells as the game progresses.

The calm and well mannered younger sister of Chante. She’s a highly competent sword fighter and the main character you’ll be controlling. Her basic hack and slash plays a lot like Adol from the 3D incarnations of the Ys series. She’s capable of doing combo attacks and jump attacks, as well as some elementally enhanced extra attacks by equipping certain items.

A gentle woman who runs an item shop. You rescue her in the first stage you play through. After hearing Chante and Elise’s story, she lets them live with her while they aren’t adventuring in the ruins. 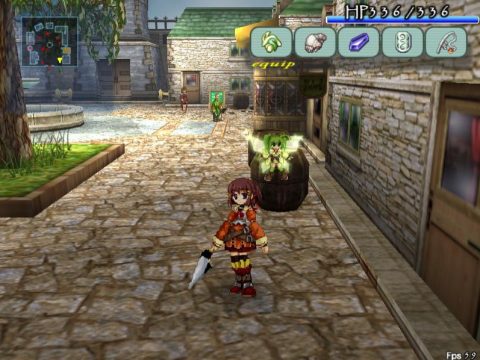 Chantelise differentiates itself from the similar Ys games by using an over-the-shoulder camera angle instead of Ys‘ overhead viewpoint. The combat is mostly straight forward hack and slash. Elise can jump around and there are some hidden jumping puzzles required to reveal secret treasures, but there’s no hardcore platforming required to beat the game. Players can rotate the camera around Elise, or have the camera lock onto a target. Chante’s magic will also home onto any target that the camera is locked onto, but Elise’s sword strikes will not.

Elise doesn’t gain levels – instead, upgrading her stats comes through finding or buying better equipment. Her hit points are increased through purchasing (or occasionally finding) bottles of a drink called “Fuerumin.” Gauntlets raise her attack, shields raise her defense, magic charms give Elise stronger magic resistances and wands raise Chante’s spell power. There are a myriad of other upgrades from speed boots to wing boots (which are a must have to get all the secrets in the game) to crystals which let Elise charge up to unleash devastating attacks.

One aspect that’s very frustrating at first is the fact that you can’t carry any healing items. Enemies periodically drop food which Elise can eat to refill her health. Chante eventually gets a healing spell, plus there’s the Dark Crystal that gives Elise an HP stealing charge attack. This does make the game feel really difficult at first. I know I went through certain areas on practice mode a number of times to scrape up enough cash to buy another bottle of Fuerumin. 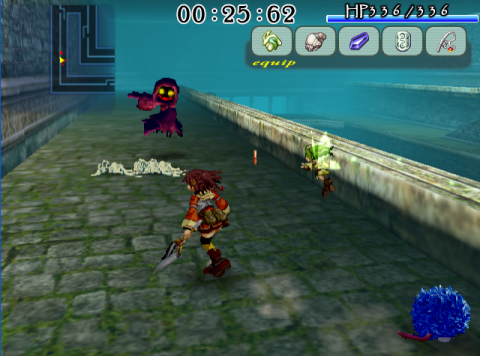 Chante needs magic gems in order to cast spells. Gems are hidden in containers or dropped by monsters. Slashing grass or hitting trees with a sword can get gems to appear as well. Be careful about the order that you pick up these gems, for Chante will absorb them in the order collected. Grab an earth gem and Chante summons steel balls that swirl around Elise, damaging enemies and protecting her at the same time. Start with the earth base then absorb a fire to increase the damage the balls do. If you use a water gem instead of the fire, the balls cause paralysis when they hit an enemy. Mix in a green wind gem instead and you’ll get some extra balls swirling around. There are lots of different combinations that can be uncovered.

Advancing through this game can be a bit tricky. When you first enter a dungeon, you have two choices. One is go through in Capture Mode, and the other is just to play through individual sub areas in Practice Mode. There are five main dungeons in the game (one for each of the four elements and the last dungeon,) broken up into series of sub areas ending with a boss arena. You can travel between sub areas up until the boss arena in Capture Mode. You cannot change your equipment in Practice mode. However, you can in Capture mode.

Each of these areas, boss arena included, has a secret treasure that can be obtained by doing a specific action. Some of the things you have to do to get the secret treasures to appear are pretty intense! If you find all of the secret treasures in a dungeon, you unlock a special room you can access only in Practice Mode. That special area too, has a secret treasure. Obtaining absolutely every one of the secret treasures in the game opens up the Survival Dungeon, sixty floors of non-stop action. The bosses you’ll face are large, multi-segmented polygonal monstrosities that take a lot of wit and skill to defeat. They’re tough, strong and while they do have their weak points, they aren’t entirely easy to exploit. Sure, the giant Jellyfish is weak to fire magic, but to get its truly vulnerable spot to open up is another story. 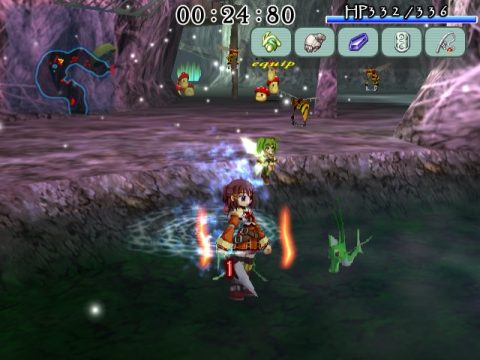 The music is again done by group called M-box, which EGS has worked with in the past. The soundtrack feels like a tribute to a lot of the synth and orchestral blended older RPG tunes many mature gamers grew up with. The game boasts a total of twenty four tracks, including an ending vocal sung by Chante and Elise’s voice actresses. There are a lot of voice overs in this game. Most of the key story sequences are fully voiced. Chante has a lot of different samples she says as she casts her spells.

Chantelise has a lot going to keep you playing. Once you obtain the fishing rod, you can go fishing in any dungeon that has pools of liquid (even lava!). To catch fish, you play a quick, timing-based mini game. Any fish you collect you can trade with the Fishing Master to get some powerful items. You can trade for the same thing repeatedly to further enhance certain stats.

For fans of action adventure games, Chantelise comes highly recommended. The maps are well done, there’s an insane number of secrets to discover, and the graphics are consistently charming throughout the game.

In 2011, Carpe Fulgur translated and released an English version (now titled Chantelise: A Tale of Two Sisters) on Steam and GamersGate.