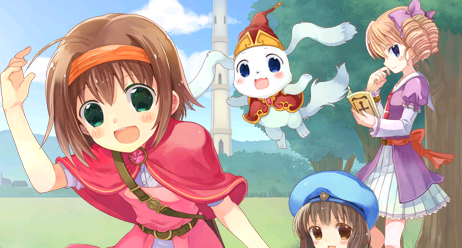 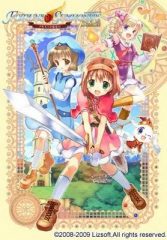 LizSoft’s Fortune Summoners feels like a long lost 16-bit action-RPG. Published and localized into English by Carpe Fulgar, the same company that brought out EasyGameStation’s Recettear and Chantelise, Fortune Summoners is developed by a totally different company, although it still fits in quite well with the rest of their catalog.

The story begins with a young girl named Arche, whose family has moved into the quaint village of Tonkiness to set up a shop. She’s fascinated by her new school, which teaches the wonders of magic, but finds herself without an elemental stone to cast spells. Realizing that her family is too poor to buy her one, she teams up with some classmates to find the wind stone, and begins a quest to power it up to harness its strength.

You’ll be controlling swordsgirl Arche Plumfield through a good chunk of the game. She picked up her sword skill from her father, despite her blade being roughly the same size she is. She can’t use standard magical powers outside of some “Unison” abilities later on. In spite of her tiny stature, she can move heavy objects.

Sana is the first friend Arche makes at her new school. She controls the element of water, which means ice spells and healing abilities. She can also form a bubble around herself to float underwater.

Stella seems to be a snotty little rich girl, but she eventually teams up with Arche and Sana. She harnesses the power of fire, and can burn down certain obstacles.

This flying rabbit creature guards the wind stone, and helps Arche on her quest. This thing’s a little bit too adorable, talking in the gooiest way imaginable, and doesn’t actually aid in combat other than flying behind Arche. 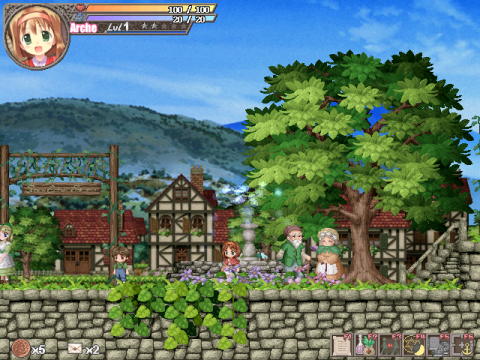 Despite obviously mimicking the structure and tone of 16-bit RPGs, Fortune Summoners is a bit different from the rest, utilizing a side-scrolling perspective rather than a traditional overhead one. The controls take a little bit of getting used to though. The sprites are a little too small and don’t have much reach, the movement is slippery, and the jumping feels rather floaty.

The combat controls are more troublesome. Although there are multiple characters, you spend a good chunk of the adventure controlling Arche. Her sword swings are slow with a noticeable recovery time, and while there are different manuevers – slashes, stabs, upward thrusts – they don’t really flow into one another, making the action feel stilted. As you level up, you get more versatile sword techniques, which makes stringing together the moves much easier, but these also take far too long to unlock. This sluggishness is intentional though, because it’s designed to prevent button mashing. By default, auto-block is turned on (though you can also activate it manually by holding up), so as long as you aren’t attacking, you’ll automatically defend enemy strikes. In theory this should require you to strategize and properly time your blows, but it still never attains the right rhythm. The enemies are far too nimble, moving and attacking much quicker than Arche, and usually dancing frustratingly just outside of her sword’s incredibly short reach. There’s no invincibility window after taking damage, and taking consecutive hits will knock you right out. While sticking an advanced, skill-based fighting system sounds like it would make the game more engaging, it’s not as polished as it should be, and simpler combat along the lines of Popful Mail, Wonder Boy III, or even Zelda II probably would’ve served it better. 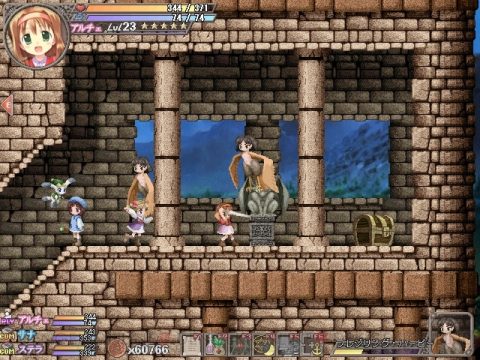 The issues with the combat are somewhat rectified with the supporting characters. Eventually Sana and Stella join your crew, each offering various magical abilities. Sana is almost useless at standard melee fighting, but Stella’s flame attacks at least have more range than Arche’s attacks, even though they’re still slow. Seconday magic works slightly differently, in that you have to select a spell and charge it for a few seconds before it’s activated. As expected, this is incredibly clumsy during battle, but thankfully any backup characters are controlled by the computer, and they’re much better at juggling mid-combat chaos. Not only is it much easier to overwhelm enemies, but Sana is generally pretty good about healing spells, which take up an extremely small about of MP. They do occasionally get themselves killed though, and since their techniques are required to get past various obstacles in a dungeon, it requires an annoying retreat to the outside world to resurrect them. Still, they’re more helpful than not, especially if you can work in tandem to get a combo going, which increases your attack power as you continuously inflict damage.

Compartmentalized, the combat system doesn’t entirely work, but the multi-character combat balances things out so it’s generally not too difficult, if not particularly satisfying. The light punishment upon death – usually just restarting the screen, though you can be transported back to town for a small monetary penalty – helps things from becoming too frustrating, even if you end up dying a lot, and you can change the difficulty level at any time. Still, party members come and go as the game progresses. When you’re alone and faced with fighting mothbees, which not only flutter about in the sky but also put your characters to sleep (or worse), the game momentarily shifts from “workable” to “completely terrible”, especially since escaping from combat situations takes far too long. 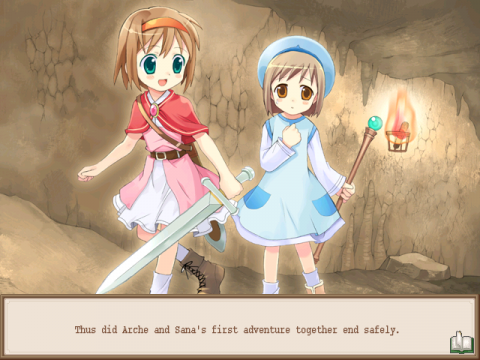 On the surface, the visuals are brilliant, with the sort of coloration and detail Falcom used in its games in the early 2000s, like the Legend of Heroes: Gagharv Trilogy and Ys Eternal remakes. It’s impossible to look at the multiplaned scrolling backgrounds of the villages and not be reminded of Redmont from Ys III. The sprites may be tiny, but they’re well animated, and overall the graphics rarely exudes the cheapness that tend to prevalent in doujin games, especially because it totally eschews 3D graphics. The music is pleasant and workable, but ultimately forgettable.

On one level it’s impressive that a game this good looking was largely made by just one person (who goes by the name MEL), but those tolls become more apparent as the game progresses. Namely, the developer clearly wanted to make a 20 hour RPG, but only really had the assets for a 5 hour one, leading to an aggravating amount of padding. In the prologue chapter alone, you need to venture through the same cave three separate times, each getting slightly farther than the last. In a later chapter, you need to venture through a dungeon twice (though with different characters and taking different paths.) The event triggers are occasionally vague, leaving you to wander about until you figure out how you’re supposed to proceed. The outdoor visuals are pretty, but quickly grow repetitive; nearly every cave and dungeon looks identical outside of some palette swapping. While ambitious, Fortune Summoners probably would’ve been better off as a shorter, more focused game.

In spite of its issues, there’s still something endearingly charming about it all. It manages to perfectly convey that child-like sense of wonderment at the adult world, of desperately wanting to be a part of something more important while still being oblivious to what it actually means. Arche worries about school and her inability to perform magic (or properly comprehend math), she misunderstands her parents’ worries and blows relatively trifling matters out of proportion. Through most of the game, Arche and her troupe are competing with her male classmates, all of whom may as well have cooties. There’s a bit of humor at how grossly inappropriate and incredibly dangerous that a group of eight year olds are playing around in caverns and fighting long forgotten evils, most stemming for Arche’s obliviousness towards whatever situation she’s found herself in. There are other amusing touches too, like the brief diary entries that recap the plot, or the boutiques where you can buy stylish equipment (which are really just palette swaps.) Parts of it get a bit too saccharine, as to be expected with something as cutesy looking as this, but it’s a welcome change from the typically overtly serious RPGs from both the Western and Eastern gaming world. Like Carpe Fulgur’s other works, the translation is fantastic, particularly in Arche’s slightly worrying, oddball personality, as well as the goofball slang made up by some of her classmates. 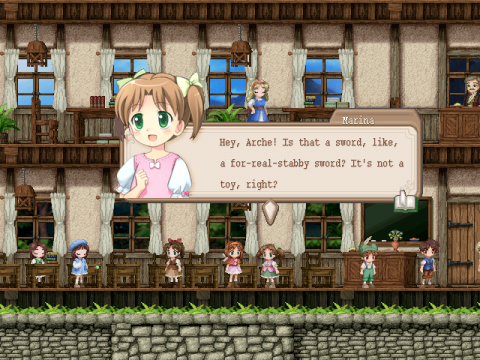 That atmosphere is largely what makes Fortune Summoners what it is. It’s a reasonably decent game, but also pretty clearly in need of some tuning, as well as a larger budget, for it to really shine. Anyone with an appreciation for the classic action-RPGs it tries to emulate will probably find it enjoyable; anyone else may not have the patience for the kind of tricks it pulls.

Fortune Summoners was originally released through standard doujin channels – that is, through Comiket and specialty stores like Toranoana in 2008. It was picked up by a slightly larger company, Jungle Japan, giving it a larger budget and wider distribution. This revamped version, known as Fortune Summoners Deluxe, includes enhanced graphics and a significant amount of professional voice acting, as well as some bonus content. The English version includes the enhanced graphics of the Deluxe version, but does not include the redone voices or Plus content.