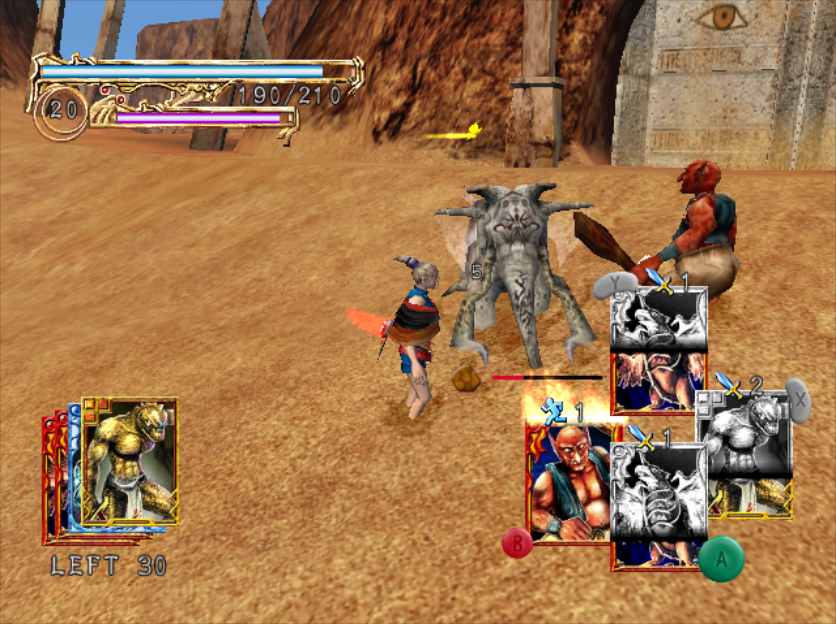 Lost Kingdoms II drops the arcade/mission style-RPG rhythm for a more relaxed one, emphasizing exploration. Fromsoftware updated the Lost Kingdoms format with two major changes: enemies are now visible and fought on the field with no transition and every explorable area is always accessible and must be traversed multiple times to find every secret.

Lost Kingdoms II, despite losing random encounters, feels much more like a traditional JRPG. FromSoftware built a very solid experience here, and the game rarely feels limited like its predecessor. Another difference is the inclusion of a good-sized explorable hub town, complete with dozens of weird, wooden NPCs that update their dialogue throughout the game, a card shop, and a fairy collector. 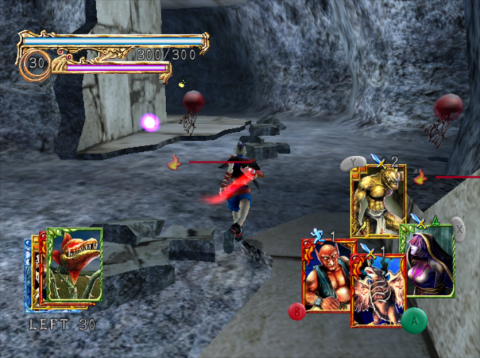 Immediately noticeable is that From ditched the dreary, European fairy tale vibe for a more generic, nondescript fantasy JRPG one. The overall color palette is vibrant and cheery, though the atmosphere isn’t necessarily a cheerful one. If anything, the bright colors only serve to neutralize the tone of the game. There’s a much higher cutscene count this time around and the plot is a bit more fleshed out.

Lost Kingdoms II takes place 200 years after its predecessor. Argwyll has enjoyed generations of peace after Katia, now a queen of legend, saved the kingdom. But trouble is brewing as the scientists of neighboring Kendaria are learning how to manufacture runestones to wage war and cause mischief.

Enter Tara Grimface, a young woman with no past who has recently joined the Band of the Scorpion, a group of thieves, to make some quick cash. Tara possesses a true runestone for mysterious reasons, making her feared and respected by the thieves, and also a target for villains. The Band of the Scorpion and Tara quickly get entangled in the Kendaria mess when by-the-numbers bad guy Leod VIII sees the true runestone during their first encounter and decides to go after her. 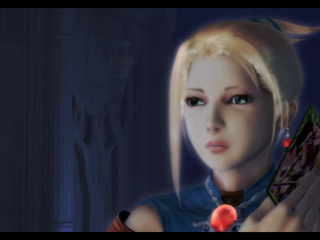 It’s often difficult to tell whether Tara is acting out her silent protagonist role or is being the curt, distrustful character she is made up to be. She has very few lines in the game. There’s an outsider, almost punk quality to her, and one of the funniest moments in the game is when the player is given the option to have her tell an NPC to “Get bent.” Tara is edgier than Katia, and the parallels between the two are interesting and add some meaning to the series. She also matches her nail polish to her crop top, which is rad. There is more to Tara’s past that is revealed over the course of the game (obviously). 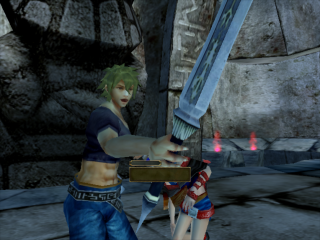 One of the members of the Band of the Scorpions who is named and therefore important. Many cutscenes involve him and the game seems to push toward him being a love interest for Tara, though this is never explored in any depth. Sol also goes out of his way to save Tara a few times, which feels like a betrayal of her character as a completely capable heroine. Depending on how thorough players are with sidequests, Sol is linked to the difference between the “bad” and “good” endings. Also wears a crop top, which is cool. 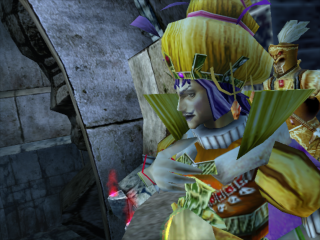 Leod VIII is on a quest for runestone power. He drives the manufacturing of runestones and, upon learning of Tara’s true runestone, becomes something of an antagonist. Wherever Leod goes, he leaves a trail of destruction and mechanical foes behind. He seems to represent the disparity between nature and machine, truth and illusion. Leod is a good indicator of the narrative’s overall quality, and, when contrasted with comparable characters, like Final Fantasy XII‘s Doctor Cid, reveals just how thin the narrative is. 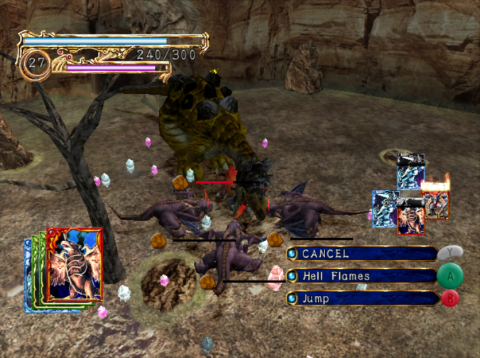 Unlike in the first game, which seemed to take place in a void, players have more agency in Lost Kingdoms II‘s world. NPC dialogue changes throughout the adventure, for instance, and the mentions of Katia’s adventure are a nice touch. Seeing the Katia statue in the hub town gives the series some perspective. In one of the more memorable moments in the game, Tara visits a grim cathedral where NPCs are hiding out after Leod destroyed their village. To say that the plot has urgency would be an overstatement, but these are nice touches.

The combat and deck building system remain largely the same, making up the bulk of the game’s intrigue. There are over 200 cards this time, allowing players to form a variety of strategies for the diverse challenges ahead.

There are new transform-type cards that add a slight Metroidvania complexity to each area. Transforming Tara into a roadblock-destroying golem or werewolf with jumping abilities opens access to side areas and secrets in each level, adding some replayability. Unlike the first game, where exploration was limited, Lost Kingdoms II rewards players for exploring fully and thoughtfully. Players are encouraged to return to areas whenever a new transformation is unlocked. 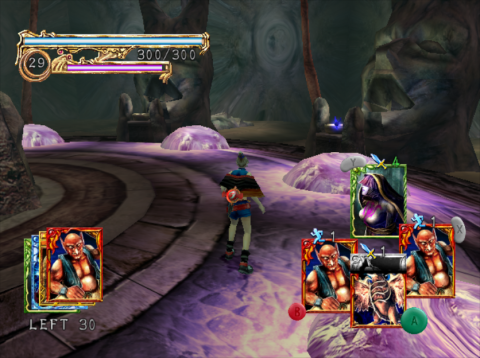 Tara earns experience points along with her cards and levels up. Players can endlessly shuffle their decks now, making it a cinch to pull out the right cards. There’s also a very rough “z-targeting” system, but it doesn’t lock Tara into facing her target, which makes it almost useless.

Since there are no random encounters, enemies can be simply ran past, making most areas a mad dash to quickly solve the puzzle and reach the boss at the end of the level. Upgrading cards is less of a focus now as opposed to just finding better cards, and there’s always an abundance of useful cards to try out. In making the normal battles completely avoidable and unnecessary, From made Lost Kingdoms II more accessible but also too slight of an experience. More aggressive enemies in larger droves would be a plus. 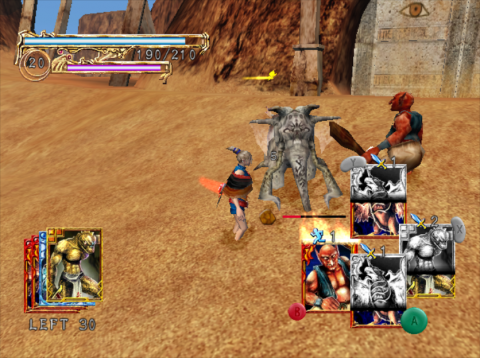 A new card element, mechanical, is introduced, which is impressively tied to the narrative in that Leod’s army solely uses mechanical cards. The only real negative update to the combat system is the revamped element system. As Tara uses and raises her affinity with one element, the opposing element’s affinity slowly decreases. If an element’s affinity decreases too much, a card of that element’s Magic Stone cost increases dramatically, making the card worthless. This is a minor annoyance, and on a normal playthrough might not even be noticed. It could result in needless element grinding, though.

Lost Kingdoms II features a slew of interesting boss encounters that require a fair amount of skill and knowledge. The timing and invincibility frames of card attacks and the telegraphing of enemy moves are more important than ever. The opponent card summoners are back, and still make up the most interesting encounters in the game. They seem less likely to spam summon cards, but they still use them with a high frequency, making some of the later battles frustrating rather than challenging. 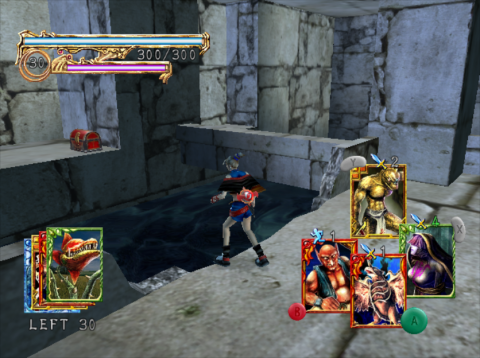 The higher emphasis on puzzle solving gives each area a complexity not felt in the first game. The old “finding keys and hitting levers” makes a comeback, but a number of new puzzle situations are introduced. One level in particular, at the Bridge of Sarvan, requires Tara to summon monsters onto activation pads throughout the area to bring down a drawbridge. Spawning enemies can quickly destroy Tara’s summons, though, forcing players to figure out the timing and which cards to use. Overall, the dungeon design features some interesting spatial relationships and are a joy to explore, but they’re all way too short to be memorable. Like with its predecessor, there is a huge difficulty spike during the final boss encounter, though here it is more manageable and feels like a fair challenge.

One minor annoyance occurs when pressing the A button to open a chest and accidentally using a card, as Tara’s battle cards are always active. This seems like it wouldn’t happen often, but the space where treasure chests can be opened, for instance, is finicky, and players may accidentally use up a valuable card.

Lost Kingdoms II bolsters its value by featuring an array of sidequests, with the most lengthy one involving collecting runestones throughout the game from hunky, snake-like cultists to get the “good” ending. There’s a battle arena for players to endlessly tinker with the game’s cards and an easter egg allusion to the first game that allows players to transfer save data to unlock cards.

Lost Kingdoms II is a much fuller package than its predecessor, but isn’t necessarily a better game. In gaining gameplay content, the game sacrifices simplicity and atmosphere. Despite featuring more named NPCs and cutscenes, the narrative isn’t any more striking. Still, there’s a charm to how goofy and melodramatic everything is, and Lost Kingdoms II seems to never take itself completely seriously. In terms of combat and card variety, Lost Kingdoms II is an entertaining action RPG that lasts about ten hours for players willing to give it a chance and a worthy addition to the GameCube library.