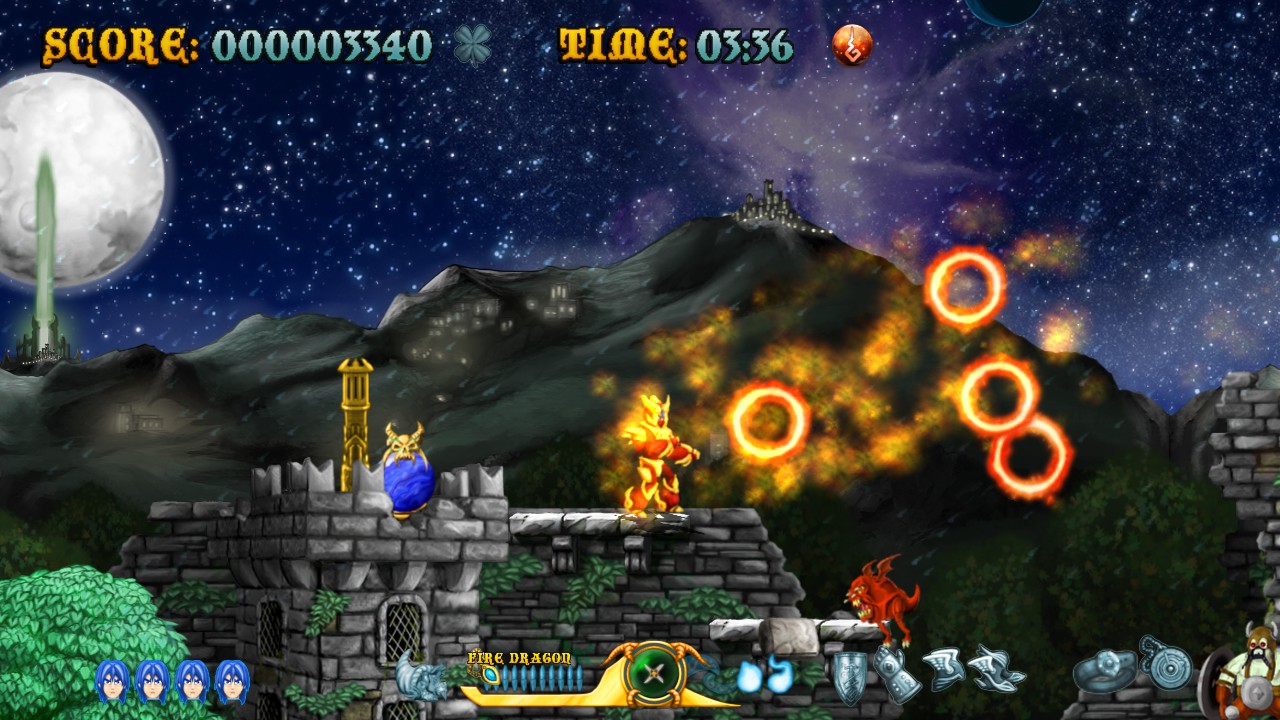 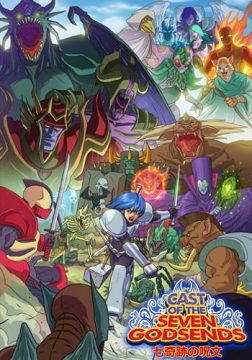 Raven Travel Studios was founded in 2011 by three people (programmer, artist and music composer) from Italy’s indie gaming scene who grew up on action platforming coin-ops and old-school anime; they went on to produce their first title, Cast of the Seven Godsends, as a homage to those sources. CotSG‘s demo was made available on Steam, which eventually hosted the complete game in Summer 2015. It draws lots of inspiration from titles like Rygar, Magician Lord and especially the Ghosts ‘n Goblins series: the crux of the gameplay is a magical armor, the level settings (including the obligatory “lava area leading to a snowy one” part) are mostly lifted from Ghouls ‘n Ghosts, as is the weapon system including charged attacks.

The plot is deliberately thin: demons kill blue-haired hero Kandar and kidnap his baby to sacrifice him for the emperor of evil’s return. Luckily the seven gods of this setting resurrect him and imbue some suits of armor with their elemental powers. Hero must find the armor first, gaining two additional hit-points, and then an orb, needed to cycle through the gods’ powers by keeping the attack button pressed. Combined with the five available weapons, they give Kandar a whopping total of thirty-five magic spells (one at a time) that can also be charged, not unlike the alternate attacks given by the green armor in Super GnG. The spells also deal more damage to foes of the opposite elemental alignment. It may seem overwhelming, but it all boils down to one thing: spam the attack button like crazy. 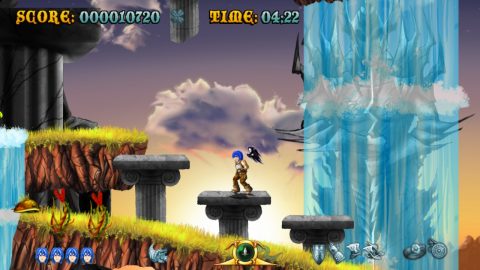 CotSG emulates the wrong part of old-school arcade games, in that it’s challenging but hardly fair. The enemies, ranging from the usual skeletons and beast-men to trenchcoated hitmen and wind-up toys, spawn endlessly with no rhyme or reason. Like in GnG, the weapons appear at random and are divided into great and near-useless – the latter might lead to badass spells, but since you can’t hit foes with them you won’t care. Checkpoints put before boss battles always preclude the appearance of the armor when you respawn, thus negating the selling point of the game and forcing the player to escape all tactics and just attack like mad (which usually works).

The Amiga-esque hand-drawn graphics are nice, but would be more suited to an adventure or puzzle game rather than an action title, especially when the projectiles become hard to see on the colorful backgrounds. Enemy design is unoriginal and Kandar looks like a bad anime stereotype. The soundtrack is not memorable either, except for some tunes like the haunting guitar melody from the frozen area. There are also several unskippable dialogues nobody cares about.

Sure, some things could’ve been made badly on purpose to pay homage to coin-ops and anime’s most cheesy features, but even then the game feels amateurish. It seems that the devs paid more attention to the flashy spells, alternate weapon and elemental armor designs than to good gameplay and level building.