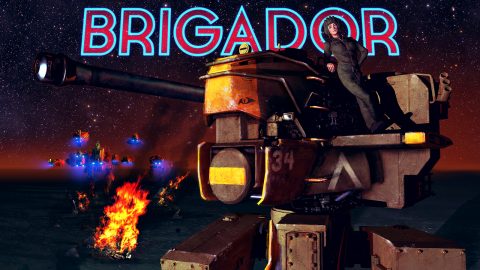 With the passing of “Great Leader”, the forces of the Solo Nobre Concern, hereinafter called ‘Company’, wait in orbit to descend upon the Outer Reaches planet of Novo Solo. At their beck and call planetside are the Brigadors, citizens-turned-mercenaries who are tasked with ‘liberating’ the planet through brutal force for their corporate masters. The Loyalists, Corvids, and Spacers stand in the way of the Company, and all four sides prepare to battle for the fate of Solo Nobre. You play as one of many Brigadors, and enforce the Company’s will, crushing resistance at the end of your gun barrel in the planet’s capital. Be aware, the Company sees the death or dissolution of the Brigador as being in breach of contract… 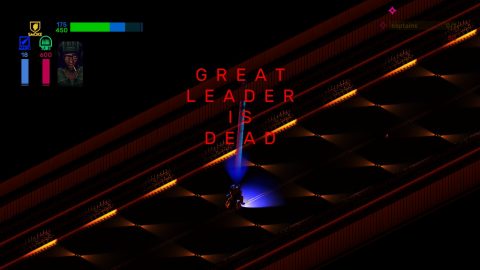 Best described as “Desert Strike with the style of Syndicate and Shadowrun“, Brigador is an isometric shooter set in a gritty cyberpunk future, with run-down slum districts standing next to neon-tinged city streets, with the luxurious country clubs and suburbs of the wealthy elite perched far away from the squalor of the districts.

Brigador places you in command of one of over fifty fighting vehicles, from enormous bipedal combat mechs to miniscule treadbikes and hovercraft, as you smash your way through fully destructable environments as dozens, sometimes even hundreds, of unique enemies try to resist the Brigador as he (or she) attempts to complete their objective and escape the combat area in one piece. Gameplay is, at first glance, similar to your average twin-stick shooter, with two weapons at your disposal and a ‘special’, usually a defensive measure like smoke bombs or invisibility. All weapons have limited ammunition, so you must constantly be on the lookout for resupply points. These are color-coded for your convenience, as each only supply a certain type of ammunition. They can also be destroyed in large explosions, if you aren’t careful (or want to catch enemies in the blast radius). Everything in Brigador can be destroyed, from the tallest skyscrapers to the lowest shanties. 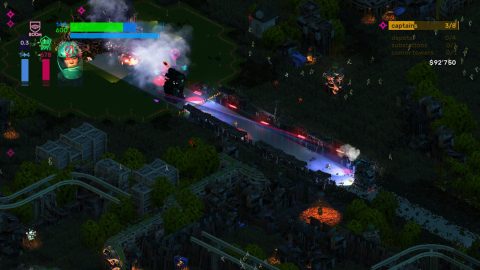 The game features a robust campaign with 21 missions (and more expected to arrive via post-launch updates). Each mission offers four difficulty levels, but unlike most games, the difficulty generally doesn’t affect the enemies faced on the mission. Instead, the difficulties decide the Brigador and loadout you will use for the mission. For instance, in Mission 6, the easiest difficulty places you in a Treehouse tank, which while slow boasts enormous amounts of armor and shielding, coupled with district-leveling firepower. On the hardest difficulty, however, you will be forced to pilot a Mongoose, an exoskeleton with embarrassing armor and weapons but active camouflage and a quick ground speed. This method of setting difficulty provides plenty of replay value, as each machine demands you play the mission completely differently. 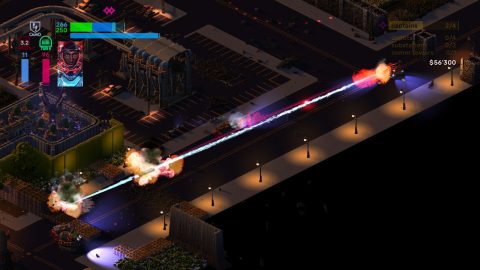 Also in Brigador‘s favor is the variety of missions seen throughout the campaign. Early missions focus on the destruction of specific enemies or buildings in a wide playground, but later missions throw unique twists on the traditional formula. One particularly memorable fight has you racing from one end of a district to the other, entirely out of ammunition to the resupply points, pursued relentlessly by drone bombs, before wheeling back around and blasting your way back to your target and escape point. Another has you slipping through a pitch-black residential area in a small vehicle, trying to avoid combat with anything larger than you are. 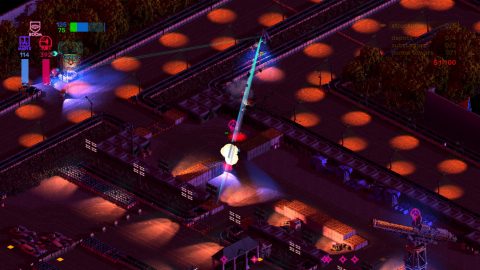 While the campaign alone is an enjoyable romp, the real meat of Brigador lies in the Freelance mode. Choose one of the thirty-plus Brigadors who represent difficulty settings, and run whatever vehicle you want, with whatever weapons or specials you want. The vehicles themselves are also tied to the payout of a given session. Rolling through a run in a massive battle tank with double heavy weapons might be trivial, but you could expect a far greater payout if you went into battle riding in a duct-tape armored bus with little more than a machine gun and a prayer. There are eighteen runs, and the objective of each is the same: Complete as much as you can, and escape to tell the tale. Your payout is limited only by your bravery, and your skills at keeping your hull in one piece. You truly have the freedom to approach operations however you like, as you need only complete one objective per area, but doing more means a greater payout. There is even a “Campaign Run”, which challenges you to go through the main campaign on a single machine, with no breaks. 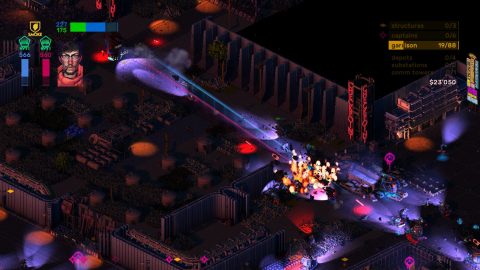 All of Brigador (besides a single daytime mission) is set against a gorgeous neon backdrop with retro pre-rendered graphics exuding a style all their own, allowing for a rock-solid framerate even when it gets really chaotic, backed by a beautiful synth soundscape from band Makeup and Vanity Set that suits the game perfectly, even if the fade-outs between tracks recall PS1-era early Redbook audio in a bad way. 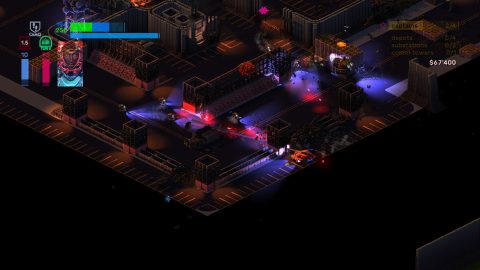 After getting this far, you might belieive that Brigador became some sort of cult indie smash, a name brought up alongside other indie darlings like Undertale or Hotline Miami that merged classic gameplay with a modern twist. 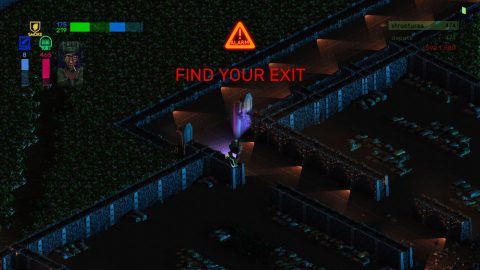 And you’d be wrong, because Brigador bombed, and it bombed hard. It was the kind of game that, from a distance, had everything one could ask for in an indie smash hit: a retro-style genre revival with a unique aesthetic, great soundtrack, and a load of polish, that recieved plenty of praise from players and reviewers alike. But it landed with a thud, with most mainstream reviews for the game coming months after it left Steam Early Access. 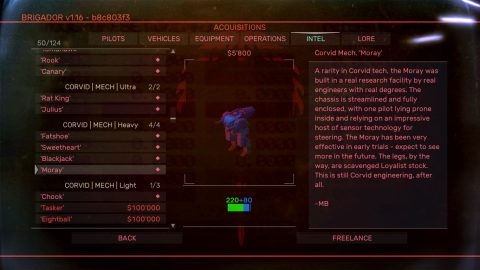 Moving past the possible buisness-related reasons, perhaps the key reason behind Brigador‘s lackluster sales can be found with the game itself: Brigador feels like a product intended for a very small, very select audience, one that would adore it, but wouldn’t be a mass-market hit under almost any circumstance. Unlike your Shovel Knights or Stardew Valleys, which build on popular, established game styles, Brigador stands alone even when compared to other isometric shooters.

Unlike most other games of its type, it focuses on tactical combat and using cover effectively, even adding in some rudimentary stealth elements to encourage careful play. Going in guns blazing like in most other action games is a one-way trip to the game over screen. The controls, also, were a major sticking point among reviewers and early players, with the game simulating firing arcs, weapon height, and asymmetrical turrets to create a far more convincing simulation than any other isometric shooter. Couple it with immense pressure where losing your bearings often means a restart. For some players, it felt like patting your head and rubbing your stomcach while trying to dance through the streets while being shot at by eight other heavily armed vehicles. Getting the hang of the controls takes time and patience, but allows unparalleled control over your war machine once mastered. Later patches allow players to slow down the game to make it a little more manageable, as well as offering far more flexibility with the controls. The neon-lit city streets, while gorgeous, also make keeping your vehicle’s bearings and finding foes a pain in the neck. Couple this with the emphasis on ranged fighting, and you’ll quickly learn to ignore your vehicle’s headlights in favor of using weapon fire to illuminate your surroundings. The destructability is impressive, but the dark graphics often make it tough to tell what buildings will explode when shot or drove through, which often leads to frustrating run-ending explosions when your walker clips a building you didn’t realize was explosive. 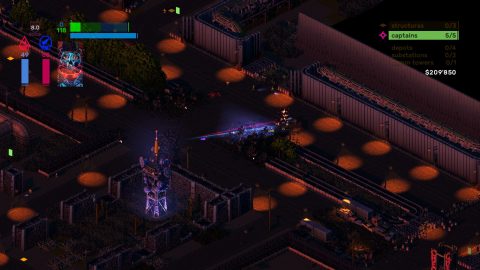 The out-of-mission presentation is spartan, with all story and world building being conveyed through text screens unlocked with cash earned from missions. But the sheer amount of play required to unlock even a modicum of the content on offer for Freelance demands constant, repeated play. For someone who isn’t absolutely invested in the game, it will seem monotonous being forced to play the same early freelance missions over and over to get enough cash to unlock most of the fun toys. Even I haven’t managed to muster the resolve to go for 100% of the unlockables. But on the flip side, for someone who adores the game, the sheer volume of content will keep you going and unlocking new content for a long time. Despite the occasional frustration, like any good roguelike, this is a game that nudges you into “just one more run”. And the feeling of satisfaction when everything is under your control and you make it to your escape vessel is among the best the genre has to offer. 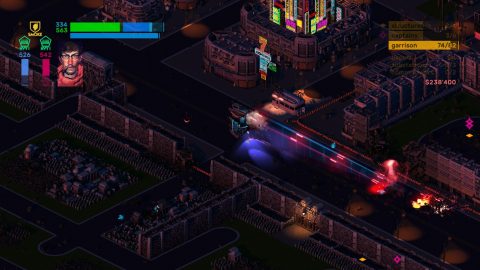 Developer Hugh Monahan sums it up best from his interview following the game’s launch with Kotaku: “for us, the idea was if I’m going to make games, I want to make my game.”

Brigador feels like a passion project in the purest sense of the word. In this age of commitee-designed games that try to appeal to every possible market, this approach is a bold, some would say foolhardy, one. Instead of building a game that ticks the boxes on a marketing checklist, it seems instead to say “Hey! We thought this was awesome, and we hope you do too!”. And given the rave reviews from its small but devoted fan following, you can be sure Brigador is a game that will be remembered fondly for years to come.

One Must Fall: Battlegrounds