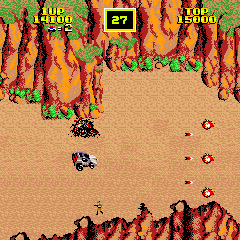 BreakThru is one of many mid-80s Data East games that fell through the cracks and was quickly forgotten. It’s a fun game, but it’s also easy to see why it wouldn’t leave a lasting impression. In 1986, arcade goers were treated to several games featuring flashier graphics and larger character sprites (Data East’s own Express Raider, released just a year earlier, among them), but BreakThru gives you just a tiny car, a limited arsenal, and a lot of bland military vehicles to blast through.

The game plays like something similar to a side-scrolling shoot-em-up. The car itself is supposed to be a futuristic assault vehicle the player must guide deep into enemy territory to recover a stolen futuristic jet. There are some occasionally cool looking enemy vehicles to battle, particularly the flame-throwing tanks and a helicopter every now and then, but the game offers little time for sightseeing. 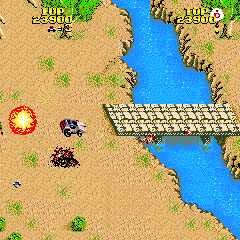 Fortunately, as players move their vehicle farther to the right or left, the speed the screen scrolls at will also increase or decrease, allowing for more precise maneuvering. Players will also need to make some impressive jumps to cross the game’s many pitfalls and obstacles. It’s not much, but being able to jump all over the place is the highlight of the game. How high and far each leap goes depends on the speed one is traveling at, and it’s also possible to destroy weaker enemies by landing on them like in Data East’s older cult game Bump ‘n’ Jump.

There are only five levels, with simple names like Mountains, Bridges, Prairie, City, and Airfield. At the end of the fifth level, there’s a short scene of our unnamed hero leaping out of his car and running into the stolen jet to fly it back home. This is unforgivable. After a final level that offers some legitimately catchy music and the most intense assortment of enemies the game has to offer, players get to board the jet and…watch it slowly fly away as they are congratulated for their efforts. Why was this jet so important when the car was able to completely break through (sorry, BreakThru™) and smash a small nation by itself? And why wasn’t there an option or at least some levels to control the jet itself? 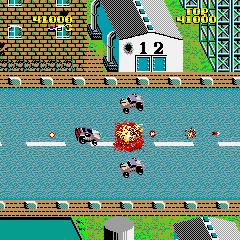 Data East definitely realized this game was half baked. While they were quick to have versions of it published for the NES, Amstrad CPC, Commodore 64, and ZX Spectrum via U. S. Gold, the back of the game’s NES packaging paints a grim picture. Most of the text is devoted to telling us how Data East is the leading arcade publisher and brought us Kung-Fu Master, Commando, and Karate Champ, displaying a total lack of confidence in the game even on the back of its own box.

Fortunately, the NES port is actually very good, and even has some altered enemy placement to make the game’s difficulty more reasonable. Things are less successfully executed on those three computer systems, however. All three versions cater to each platform’s strengths, but with the catchy music and fast scrolling removed, the game is made even more tedious than the original. The ZX Spectrum and Amstrad’s background art are actually very nice thanks to the work of Dawn Drake. She created character and background graphics for a variety of licensed games for Ocean throughout the 80s and early 90s. While not famous, she is the person most singularly responsible for the look that Ocean’s many licensed games would come to be known for, and was also versatile enough to produce graphics for  each version of a game across multiple unique platforms.

Besides having some talent behind its computer releases, BreakThru is notable for a more obscure reason: The way it plays seems like a bridge between Data East’s earlier hit Bump ‘n’ Jump and a mysteriously unreleased arcade game called Mad Motor, which was set to be distributed by Data East but was actually developed by Mitchell. Mad Motor only exists as an unfinished prototype, and unfortunately neither it, Bump ‘n’ Jump, or BreakThru have developer credits, but thanks to the initials in the high score screens, BreakThru gives us a few more guesses as to who may have possibly been involved in Mad Motor‘s development. 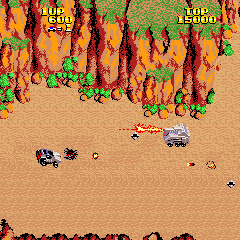 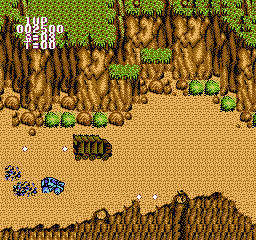 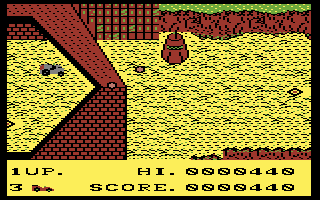 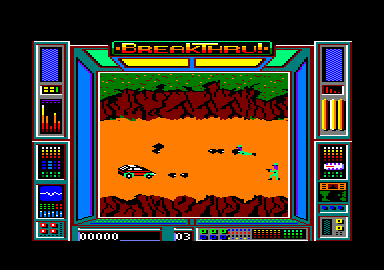 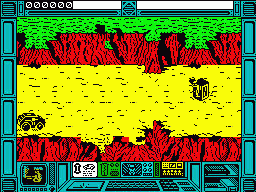