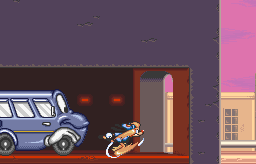 If you ask a lot of people what their favorite Disney TV cartoon was, it’s unlikely the answer will be Bonkers. The concept was sound, at least – a cartoon bobcat fights crime with the help of his regular human partner. Not unlike the idea of Who Framed Roger Rabbit?, although the two share no relation except for their general concept. Nowadays, however, it seems to be a show that people, for some reason or another, struggle to remember. The same could be said for Capcom’s SNES platformer, a game that came and went without making much of an impact on anything. It existed, and it was a decent use of the license, but there’s so many other, better games of its type that it’s difficult to remember. At the very least, you’d have a far easier time arguing it’s the superior game than its vastly different Genesis version, unlike Capcom’s Aladdin. Rather than being developed by Capcom’s usual score team, Bonkers was actually the work of Sun L, who was typically an outsource developer, and is mostly known for their Great Battle series of Super Famicom games. (They did later work on Mickey to Donald Magical Adventure 3  for Capcom.) 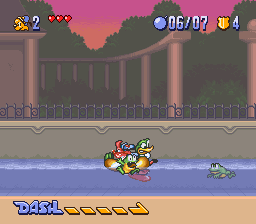 A mysterious thief has stolen three famous Disney props and scattered them across Los Angeles, and Bonkers takes it upon himself to retrieve them. There’s not much more plot once the introductory cutscene ends, aside from a little dialogue just before the final stage. The search begins in a mansion apparently owned by Donald Duck, with three more stages to choose from opening up after that. Clearing the game’s six stages will only likely take you a little more than a half hour, and that’s without any way to record your progress. Given the license, however, there’s nothing particularly suprising – or flawed – about the game being as short and simple as it is.

The game itself is a fairly typical side-scroller, where enemies are defeated by jumping atop of them, and progress is made by moving to the right as quickly as possible. Despite the simple nature of the levels themselves, there’s a lot of fun setpieces that help keep the game at least somewhat memorable. The downtown stage has a segment where you have to outrun speeding cars on an interstate, before leaping your way through a traffic jam. The movie studio stage takes you through a Wild West set, followed by a sci-fi soundstage where the saucers you platform across tear holes in the background. Sadly, not all the stages are ever this inventive, especially since the penultimate stage is a sewer, but what’s there is nice. 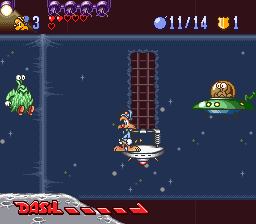 Unsurprisingly, Bonker’s main method of attack is to jump upon foes, at least for those enemies that aren’t protected by spikes or flames. By pressing the Y button, however, you can make the bobcat burst forward in a dash of speed, useful for taking out enemies, smashing through certain obstacles, and getting a lot more horizontal momentum out of your jumps. There’s a brief cooldown after each dash, however, so you can never go quite as crazy with it as you want. It’s a mechanic that feels very similar to Konami’s Buster Busts Loose, at least on paper. Unfortunately, while that game had you doing such impressive feats as running up sheer walls or leaping from plummeting train cars, this game never does anything quite so exciting.

You also come equipped with a supply of bombs to toss at enemies from long range, which will explode either on contact or when they hit the ground. While you only start off being able to hold five bombs at once, you’ll want to grab as many police badges as you can find. Contrary to popular wisdom, you DO need those badges, as every ten you collect lets you hold one more. Once you have enough bombs, the game starts to become even easier, since you’ll often never have to venture close to enemies who would be hard to land a hit on, otherwise. Aside from collecting badges, you’ll generally want to try exploring the upper paths in a level to find more useful items, like heart containers. Sometimes you’ll encounter Bonker’s buddy Fall-Apart Rabbit, who will inexplicably offer you useful items like extra lives after you blow him up. 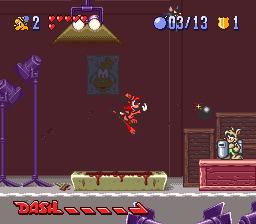 While the game doesn’t look especially impressive for the year it was made, there are a few graphical touches of note. There’s a few unique animations for taking hits in the cartoon’s usual slapstick manner, which makes for a cute touch. The game also deserves credit for its unusual continue screen: A comedy club in which an anthropomorphic stick of dynamite tells you awful, awful jokes. The only way to keep playing is to choose to laugh, as difficult as it might be to choose that option. The music, while far from best work with the SNES sound chip, is usually pretty appropriate for the game. The somewhat jazzy tracks for the cruise ship and downtown stages are particular highlights. 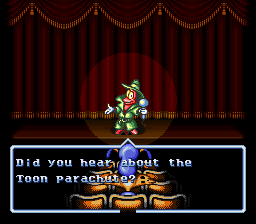 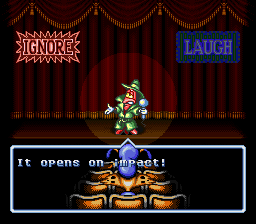 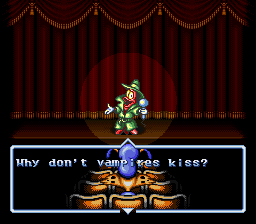 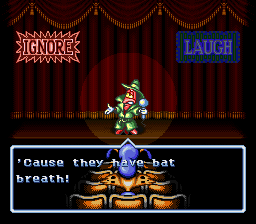 It’s like if Mike Haggar crossed whoever writes the jokes for popsicle sticks.

It’s difficult to really point out anything in particular about Bonkers, for good or ill. It’s a competent game that does a good job of representing its license, but that’s about the best thing that could be said for it. Almost all of Capcom’s other Disney games manage to eclipse it in some form or another, which means there’s nothing to make this particular title a must-play, unless you happen to be a massive fan of the cartoon. Much like a sugary bowl of cereal, you’ll have a decent time you’re playing it, but by the time you’re done, you’ll probably hardly even recall it. 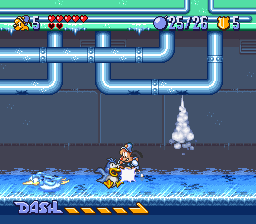 Despite everything, however, it’s still probably the best game starring an obnoxious cartoon bobcat you’ll ever play.