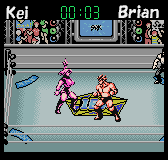 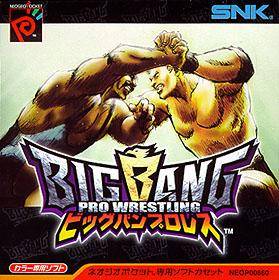 Seven years after the non-stop crap-fest that is 3 Count Bout, SNK took a second shot at the wrestling genre with Big Bang Pro Wrestling for their tragically failed Neo Geo Pocket Color console. If you’re worried that it’s anything like their disastrous first entry in the genre, then don’t be – it’s actually a really badass game. Its plot follows ten wrestlers who compete in a federation called IEW (NO clue whatsoever what that stands for) as they fight for the heavyweight title.

Probably meant to represent the average style of pro wrestling. While his color palette and endless Toukon bring Kenta Kobashi to mind, it’s more likely that he’s partially based on, or at least inspired by, The Rock.

Your classic massive Big Van Vader-style wrestler. His “street clothes”-style attire and raw, brutal moveset make him the closest to a pure brawler in the game.

Like Brian, Alex is probably just supposed to be an average-style pro wrestler. Despite his comparatively small stature, he’s as strong as they come.

A completely shameless knock-off of ‘Taker, down to his moves, mannerisms, and general style.

A high flying lucha libre-style wrestler who wears an eagle mask. It’s worth noting that he bears a resemblance to a smaller version of Tizoc “Griffon Mask” from SNK’s fighting game Garou: Mark of the Wolves.

Sho is your basic shoot-style wrestler. His fighting style is supposedly based around Vale Tudo, but he looks more like a Muay Thai fighter. If you’re looking for a submission fighter, this is your guy.

Probably the closest that Big Bang Pro Wrestling has to a pure power-style wrestler. Many of his moves look absolutely brutal. Possibly based on Bill Goldberg or Stone Cold Steve Austin?

Given his face paint and mist spiting ability, it’s safe to assume that Macey is probably meant to be based on Great Kabuki. Also has a surprisingly diverse moveset.

The extremely tall boss of IEW Champion mode, who becomes playable after he’s defeated. Possibly based on Shawn Michaels?

Definitely one of the most excessively well endowed female character in video game history. Not the Mai Shiranui-style flirt that you’d expect, she’s actually a mega badass, complete with a spinning back-fist, ala Aja Kong. Kei seemingly becomes playable out of nowhere after you keep a saved game going for a month. 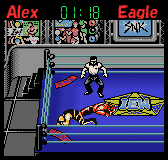 Big Bang Pro Wrestling basically plays like Human Entertainment’s masterpiece Fire Pro Wrestling, in that it’s based around a timing based grappling system. When the wrestlers make contact they’ll immediately enter into a grapple. You have to enter the command for your move IMMEDIATELY after their palms hit each other’s shoulders. If you do this before your opponent, without being too early, then you’ll perform your move. At first you’ll only be able to pull off body slams by pushing A, but after you’ve warmed your foe up a bit you can execute other maneuvers by combining the command with any direction on the joystick.

As great as the system works, the timing is much, much more difficult than it is in most Fire Pro Wrestling clones. This is in part because of the timing being so precise, but it’s mostly because of the awkward grappling animation. After the wrestlers reach all the way back they’ll IMMEDIATELY snap into place grabbing each other’s shoulders, with NO frames of animation between the two positions. This is so awkward that before you get accustomed to it you’ll literally find yourself counting frames just to be able to get the timing right with any kind of consistency. If you’re playing it on an emulator then try slowing it down at first to see what I mean. Either way, you’d be wise to practice on Easy mode when you first start playing the game.

While it’s VASTLY simplified compared to Fire Pro Wrestling, there’s still a lot of cool things that you can do, given that there’s only two buttons on the machine. All of your attacks are performed with the A button. While standing you have two strikes, two more ways to attack downed opponents, and you can pull of another move to counter a running wrestler. Your running attack differs depending on whether your foe is standing or downed, and you can whip your opponent to the ropes or right out of the ring. If the fight goes to the floor, you can pull a chair out of the stands, bring it back into the ring, and wail away on you foe with it. Everybody besides David can climb the turnbuckle and bring death from above to the other wrestler in two different ways (one that works if they’re standing, and another that works if they’re downed). With the B button (either in neutral or when combined with a direction on the joystick) you can climb the top two turnbuckles, run, whip, exit or re-enter the ring – even do character specific taunts. After dishing out a decent amount of punishment your character’s name will begin to flash, which signifies that you can perform your finisher (really just a special move – it doesn’t necessarily end the match). When you hit both buttons at once your wrestler will lunge forward – if they make contact then you see a close up of their face and they’ll pull out their most devastating move. 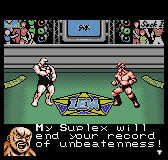 Not only have you got four different modes of play, but you can also do a fair amount of fooling around with setting up the matches. You can play a stand alone match against the CPU or a second player, organize an eight wrestler tournament, or fight your way through IEW Champion mode, which is basically like a story mode, complete with the wrestlers smack talking each other on the mic before each fight. Anybody that you’ve got available can compete in the other three modes, but only the original eight can enter IEW Champion mode. For stand alone matches or tournaments you can change the time limit, the difficulty setting, the ring, and the ring’s color palette, turn off count outs, and select which kind of match to fight out of four different rule sets. In standard matches you can win by pinfall or submission, rope breaks apply (meaning you can’t be pinned or made to submit if you’re against the ropes), count outs are 20, and you’ll get DQ’ed for making three chair shots. “No Rules” is like standard matches, except that pins and submissions apply outside of the ring, and count outs and DQs don’t apply at all. Then there are Casket Matches, where you can only win by hurling your foe into an open coffin. The last kind of match is a Cash Match, where you can only win by climbing a pole to reach a sack of cash (rapidly alternate between A and B). You can knock your foe off of the pole if they’re low enough, of climb after them and throw them to the ground if they’re out of reach.

SNK’s entries for NGPC tend to have spectacular presentation, and Big Bang Pro Wrestling is no exception, ranking up there with their best for the platform. The character sprites had to be made relatively small for enough of the ring/arena to be visible on screen at once, but it still excels when it comes to detail. The wrestling moves themselves are all beautifully animated, and full of subtle nuances. Each character has their own ring entrance, complete with their own entrance music. All they really do is walk into the ring, but there are differences between how each of their entrances is presented (smoke, pyrotechnics, strobes, flashbulbs going off in the crowd, etc). It’s nothing short of amazing to see how lively the crowd is – EVERY audience member that’s visible is separately animated and NO sprite is identical (though several are palette swaps/mirror images), and there’s even audible crowd noise before the bell rings. There’s an announcer table to the far right, flashing monitors around the arena displaying “IEW”, and people in the seats holding signs telling you to “Sock It!” or other such nonsensical crap. You even get to watch an animated intro before getting to the title screen. SNK also had the smarts to keep the ref very actively attentive of the match, but still keep his distance, so that he never blocks your view of anything. Like in many, many other wrestlers, you can run into the ref and knock him out temporarily.

Big Bang Pro Wrestling was the last title released by SNK before they went bankrupt. So despite the fact that it was fully translated into English, they never had the time to release it outside of Japan. It’s completely identical when played in English, except that there’s a third ring to select from when the machine’s language setting is set to Japanese. 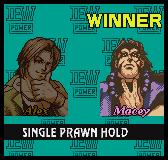 Apparently, Big Bang Pro Wrestling was originally going to be called Wrestling Madness, as evident by the fact that there’s actually a beta version of the game floating around in ROM form with that title. The two play identically, but Wrestling Madness differs from Big Bang Pro Wrestling in the following ways: the title screen is different, the options mode doesn’t work, Mike has a different color palette, Kei’s sprite is different during the intro animation, and all of the wrestlers have different character portraits, both at the character selection screen and when they perform their finishers. The WM character portraits differ from those in Big Bang in that they’re much goofier looking versions of the characters and ugly as hell, as opposed to the tamer and much better looking portraits of Big Bang. Interestingly, the sprites shown during each the intro and ring entrances more closely resemble their portraits in Wrestling Madness than in Big Bang Pro Wrestling, so it seems that SNK never got around to redrawing them when the change was made.