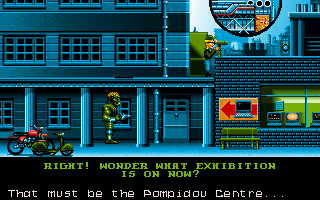 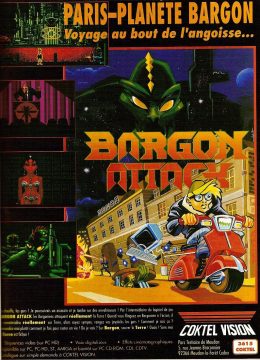 In Bargon Attack the entire globe is fascinated with a new computer game, also called Bargon Attack. In the meantime, people have started to go missing, and a strange church filled with mask-wearing preachers is rising in popularity. This is actually a stealth plan by a real alien race, also known as the Bargons, to destroy the Earth. Only a nerdy glasses-and-baseball-cap wearing computer programmer can save the day.

Based on a French comic, Bargon Attack is a fairly typical Coktel game. It’s similar in structure and function to Fascination, Ween: The Prophecy, and so forth, but unlike these, it utilizes a third person perspective. Much of the game is spent tracking the aliens through the streets of Paris, down through their secret underground lairs, and finally to their home planet. Contrary to Coktel’s other games, most of which were quite weird (or at least avant-garde), Bargon Attack is pretty straightforward through most of the adventure. It’s filled with tiny, nearly invisible objects which need to be found, insta-death situations, a few timed sequences, numerous lock-and-key bits, and logic puzzles which aren’t quite logical. (To fix the broken tire of your motorbike, you simply need to re-inflate it with a pump, never minding that it’s not technically fixing anything.) The plot actually does get somewhat interesting by the end, which culminates in an info dump about the rather dark political situation on Bargon and their reasons for attacking Earth. There are some amusing meta-references (there is a game within this game after all) and everything evokes B-level sci-fi movies. But there isn’t a single line of dialogue that makes any real sense in the English version – common in Coktel games, but particularly bad here – which makes the whole experience more obtusely perplexing than it already is.