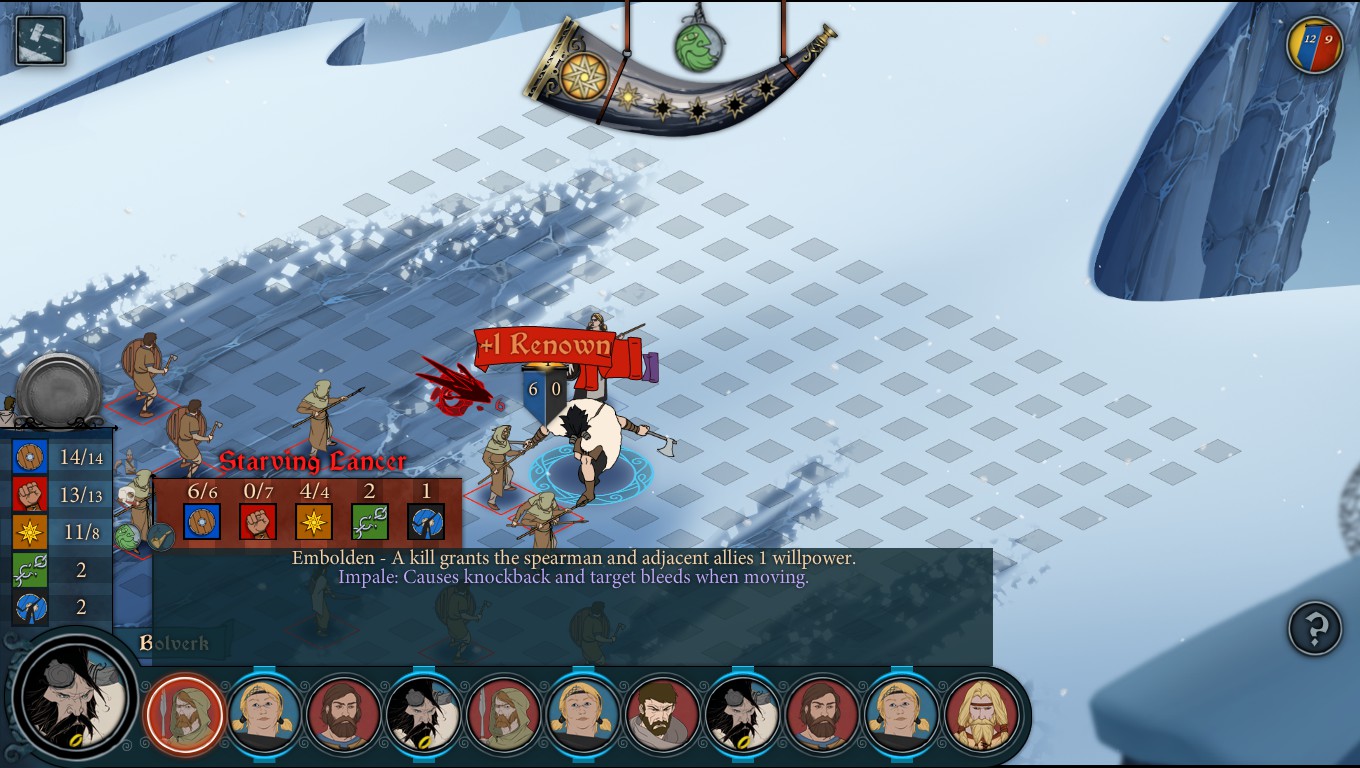 The Banner Saga 2 feels less like a sequel and more like another set of chapters added to the first game. It continues where the first game left off and continues with the same style of gameplay, visuals and storytelling as its predecessor. Once again, the player leads the caravan of vikings and giants through a broken world, passes the monuments to gods who killed each other, fights the neverending forces of dredge and tries to manage meager supplies. Once again, the game gives us beautiful landscapes and fluid, rotoscoped animation combined with haunting, mournful music by Austin Wintory. There’s no revolution here, although the game does have a few smaller but noticeable differences from the first Banner Saga.

When you start the game, you’re able to import your save file from The Banner Saga, with certain decisions (and their consequences) carrying over from that game. While there aren’t as many variables at play as one could hope (and the most important one can be decided manually if you choose not to import), it’s always a nice feature to have in such a choice-focused title. After that, those who survived the events of the first game will continue their march to meet the human king.

Gameplay-wise, the sequel brings several minor improvements to the first game’s formula. While the rules of combat are the same as they used to be (although the option to pick a general strategy based on each side’s numbers has been omitted), The Banner Saga 2 adds a bit more variety to both the enemy types and the classes and abilities of playable characters. Some of the battles also have modified victory conditions – you don’t always have to kill everyone on the opposing side, sometimes it’s possible to win by eliminating a boss character, removing obstacles which block your caravan’s way or performing some other plot-related action. The changes aren’t that big but they’re welcome as they prevent the game from becoming too repetitive. 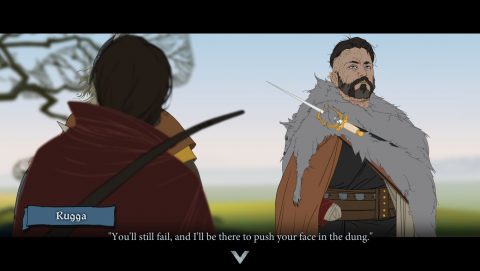 The plot of Banner Saga 2 is driven by two important characters: Rugga and Bolverk. The former is a leader of a group of humans who join your caravan near the beginning of the game. He’s a ruthless man who serves as a foil to the protagonist and you can either end up as his enemy or forge an uneasy alliance. Near the end of the game, he forces you to make a decision which might result in you having to stand against your former friends.

Bolverk, the other important character, is a varl berserker who leads a group of violent mercenaries known as The Ravens. He is one of the game’s playable characters (like the previous title, Banner Saga 2 often switches perspectives between two travelling groups) and unlike all the other protagonists, he’s more of an anti-hero. While it’s possible to make him a bit more benevolent, the game puts a lot of effort into showing how different someone whose life revolves around violence and money is from villagers trying to survive in a hostile environment.

Paradoxically, it’s Bolverk’s story that connects more closesly to the events of the first game and the lore of the world of Banner Saga. While your old caravan struggles along the way to Arberrang, meets the race of centaur-like Horseborn and has to deal with the more personal consequences of what happened before, The Ravens get hired by Juno which results in them getting involved with both the fight against the dredge and the mysterious affairs of Menders.

Unfortunately, the overall plot is not the game’s strong point. The biggest problem is that there’s simply not enough of it. The Banner Saga 2 is very obviously a second part in trilogy: it builds on the foundations set by the first game in the series, it leads up to the climactic events but in the end, it doesn’t resolve anything. Occasional lines of dialog hint at the reasons behind the wolrd being the way it is but any revelation is just a set up for more questions that won’t be answered until the third game. Both of the game’s storylines (that of the old caravan and that of Bolverk) end on cliffhangers, there’s very little closure (especially compared to the emotional ending of The Banner Saga) and nearly none of the plot threads get resolved. 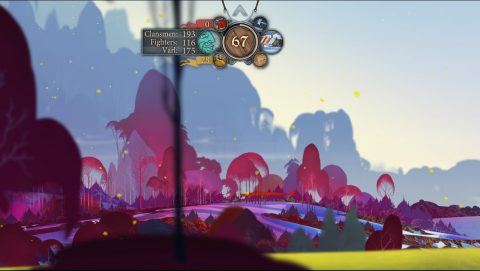 On a technical level, the game doesn’t have too many problems: it’s stable and doesn’t seem to suffer from any game-breaking bugs. The only things which can cause complains are a mobile-oriented interface which sometimes feels a bit inconvenient with keyboard and mouse as well as an overly long, unskippable tutorial during the early stages which can’t be bypassed even when importing a saved game. This, combined with generally lower difficulty when compared to Banner Saga, feels too hand-holdy given the game’s desperate atmosphere.

As could be expected, Banner Saga 2 both looks and sounds great. Both the visuals and the soundtrack are exactly the thing that could be expected after playing the previous title, although both bring some new memorable elements: the former with an impressive scene of the caravan crossing a chasm as Eyvind uses his magical powers to hold giant rocks in the air, creating a temporary bridge; the latter with darker, more rhythmic and ominous music associated with The Ravens (unfortunately, the game seems to have less vocal tracks than the previous one).

In the end, The Banner Saga 2 is likely to please the fans of the first game but it probably won’t change the minds of those who didn’t like it. The gameplay is slightly better, the main storyline is not as good but everything else is more or less the same thing. The game’s atmosphere is amazing and it feels good to be back in this beautiful yet sad world but it’s also difficult not to feel that this was the least important part of the journey, more of a buildup to what will come later than a memorable story.