Sega’s Alien Storm is essentially the spiritual successor to Golden Axe. Also directed by Makoto Uchida, Sega’s expert of scrolling beat-em-ups, the game switches from the land of fantasy, swords and barbarians to a world of science fiction, lasers and aliens. 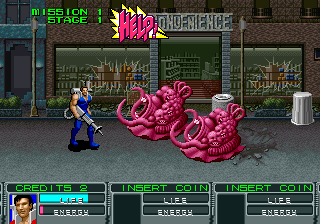 Mechanically, Alien Storm is quite similar to its predecessor. There are three characters: Gordon is the male who wields a lightning gun, Karla is a female with a flamethrower, and Scooter is a robot with a lightning whip. (They are named Garth, Karen and Slammer, respectively, in some versions.) Similar to magic spells there is a screen clearing attack, which eats up a sizeable portion of the player’s “Energy“ bar. Gordon summons a helicopter, Karen calls in a miniature nuke, and Scooter detonates himself. Also, rather than a jump button there is a roll maneuver. In certain versions, three players can also fight aliens simultaneously. There are minor differences between the two- and three-player versions – Gordon and Karla wear either red and yellow, or blue and red, respectively, and the levels are in a different order. However, when the Energy gets too low, then your weapons no longer function, and you are reduced to low-strength melee attacks. Also, rather than a jump button, there is a roll maneuver, which can also be used as a shoulder tackle. This not only feels limited, but also rather redundant considering that your characters can still dash and attack, as in Golden Axe. 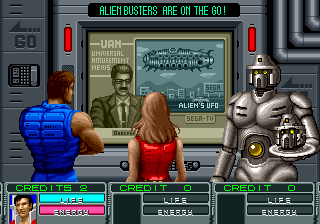 At times, the action veers off from the belt-scrolling beat-em-up to two other variations. The most common is a first person shooting gallery, where the camera shifts back and forth as you control a targeting reticule, mowing down bad guys. Most of the scenery can be destroyed, which in turn reveal energy charging power-ups. While mowing down bad guys and scorching shelves of retail garbage is fun, the enemies pop out too quickly, and your cursor moves too slowly, making it nearly impossible to avoid damage in single player mode. The other segments are auto-scrolling running scenes, where your character charges forward and shoots bad guys. It’s fun to see your characters sprint and make gigantic leaps over the gaps in the ground, but otherwise these areas are too short to be substantial. 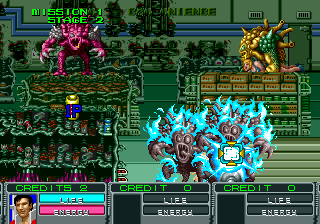 While as functionally solid as any other beat-em-up at the time, Alien Storm is still a lesser game than Golden Axe in practically every aspect. Even though Golden Axe drew liberally from Conan the Barbarian, its grim world design, its pounding soundtrack, its memorably bizarre creatures, all worked together to create something that was marvelously distinct. Alien Storm possesses no such finesse – there are few other landscapes other than drably ruined suburbs, cities and laboratories. The alien designs are fairly decent, but there’s little variation in them. This is actually pretty standard in arcade beat-em-ups, but it’s still disappointing when compared to the disgusting legion of creatures in Sega’s Alien Syndrome. Plus, it’s slightly clever when innocuous looking barrels and mailboxes reveal themselves to be mere shells for alien snails, but these cards are played early, and the game never even attempts to be any more clever. The music is unusual, though the “Bad breath, man!” speech clip is amusing. 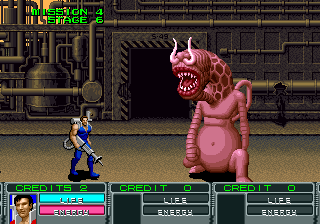 Most disappointing is merely the wasted potential. Each of your characters has several weapons, including grenades and bazookas, but cannot be used individually. Instead, they’re just part of pre-canned combo animations. Your guns only shoot projectiles in the auto-run segments, for example, and the grenades are only used to dispose of enemies lying on the ground. The moveset isn’t that much smaller than other similar games of the era, it just hammers home the feeling that it’s little more than a sprite swap on the Golden Axe template, instead of using its setting to try anything new or markedly different. 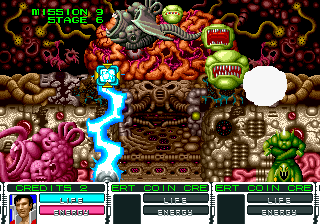 Outside of its initial arcade release, Sega ported Alien Storm to the Genesis and Master System, though the latter was only released in Europe and Brazil. While the fundamentals are the same in all, the level breakdowns and backgrounds are different across all three. The arcade and SMS versions begin in a city block, while the Genesis release starts out on a farm. The SMS port has an exclusive segment where you run through the subway, while the Genesis version also has an additional level in a laboratory. The final areas in the arcade version, where you assault the alien battleship, takes place over three separate, rather repetitive stages, whereas these areas are condensed in the home ports. Outside of the final boss (a gigantic brain with a single eye which is fought in a shooting gallery scene), there is only one other boss in the arcade version, which has three different forms. These were broken out into separate enemies for the other versions. 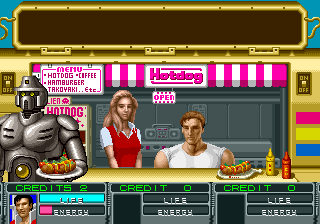 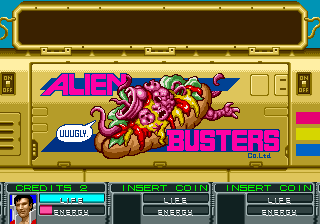 While the Genesis version looks almost visually identical to the arcade version, it’s missing numerous substantial details. The arcade game opens with a three heroes working a food truck called “Alien Burgers”. When the attack begins, the sign flips over to reveal their true name as “Alien Busters”, before launching into action. There are a few other cutscenes that precede the levels, like the ones with the heroes watching news broadcasters, that are replaced with simple scenes of aliens terrorizing the citizens. A handful of enemies, including the slime pools and variations on the snail enemy, are missing. The scaling effects in the shooting galleries are gone – blowing up everything in sight isn’t nearly as impressive when you don’t have bits of debris flying at the camera. While citizens still morph into aliens, then are no longer eaten and killed by them. 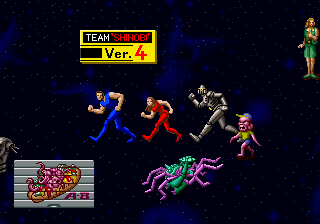 The ending to the arcade version, keeping with the strange finales of Altered Beast and Golden Axe, is like a bizarre 80s music video, complete with flashing colored lights, quick flashes of random sprites, and your three characters in the center of the screen, goofily marching in rhythm. The Genesis ending adds a text scroll and keeps the basic theme, but isn’t nearly as silly. Most damning is the change in the scoring screen. In the arcade version, when your game is over, you are assigned a rank by a panel of judges from various Sega games, including Gilius Thunderhead from Golden Axe. You are still ranked in the Genesis version, but the cameos are missing. You can also see references to other Sega games on the TVs in the electronics store. 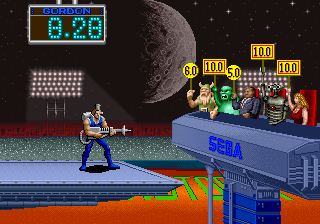 The SMS version plays very differently from the others. It’s more slowly paced, enemies are killed in one hit and characters can no longer combo attacks, so it doesn’t feel very much like a beat-em-up anymore. You also only have a single life, with three credits, and continuing sends you back to the beginning of the scene. There are also only five levels in total, there is no multiplayer and Karla/Karen is completely gone. Gordon’s super attack has been changed into a nuclear missile, which is actually cooler than his old one. Overall, the port is not fantastic, though for what it’s worth, it’s a huge step above the SMS port of Golden Axe.

None of the home computer ports are particularly good. The Amiga and Atari ST versions look the best of the bunch, though still worse than the Genesis iteration, with less colors and lousy animation. All of them have choppy, awkward gameplay, but the Amstrad port is the pits, with the 3D scenes being so sluggish that they are essentially unplayable. All of these versions have a simultaneous two-player mode, at least. 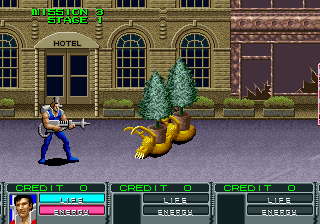 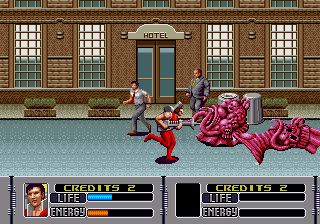 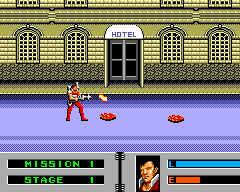 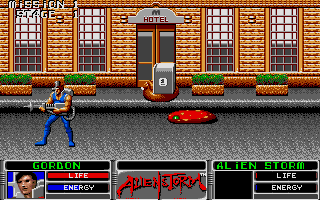 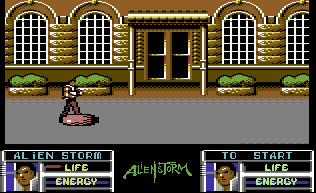 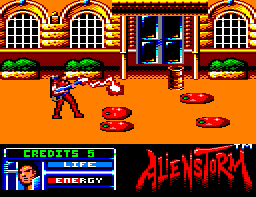 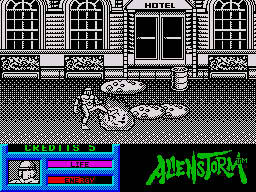