A cliché statement though it is, imitation is indeed the sincerest form of flattery. Unscrupulous designers thought they could be notable by plagiarizing a bigger game’s style without bothering to actually make it play as well, and this glut of poor quality “follow-the-leader” products could make it tricky to distinguish the bad from the good. Thus, no one can be faulted for quickly playing Vice: Project Doom and dismissing it as a Ninja Gaiden ripoff, with segments that also steal from Spy Hunter and Operation Wolf. But when you get right down to it, is that really such a fault? 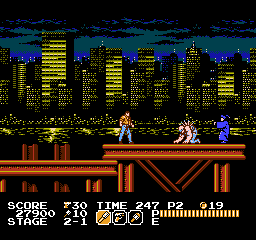 Vice: Project Doom (Gun-Dec in Japan, a title too close to the unrelated Gun*Nac by Compile) was published by Sammy and developed by Aicom, the same makers of Pulstar, another shameless yet great clone (specifically of R-Type). Released around the twilight years of the NES, it was not very high-profile, yet somehow claimed a cover image on Nintendo Power #24 and gained a cult following among NES aficionados. It takes place in an indiscriminate time in the future where the ominous B.E.D.A. Corporation is behind the creation and distribution of a drug known simply as “Gel.” Detective Quinn Hart, a tough no-nonsense Vice Squad officer, finds out about the horrors of Gel after destroying a heavily armored truck with a mutated driver, shipments of Gel, and bizarre guns that can’t be bought on the streets. With the assistance of his partner, Christy, and their friend, Sophia, Hart tracks the drug trail to south Central America only to find an increasingly high number of horrors related to B.E.D.A’s wrongdoings. An unexpected reunion with his former partner, Reese, makes Hart realize that something inhuman is driving the evil corporation’s motivations, but it will take all of Hart’s determination to find out the dirty little secrets he needs to close the case. However, he may end up learning more than he ever would have wanted to know… 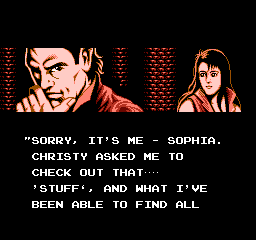 There is an actual running plot in Vice: Project Doom that is displayed by brief inter-level cutscenes. It’s not the most engaging plot of all time, but it does cast enough mystery that the player wants to keep going to find out what happens at the end, and there is an interesting enough twist at the end, even if it still leaves a wide swath of questions open when all is finished. The story is essentially gravy, but it’s a bit more involving than your standard action title, and makes good use of the ambiguous setup of “in the not-too-distant future.” It is nice to give our hero a bit more dimension than your standard pixelated humanoid, and the game doesn’t beat you over the head with the story either. The cutscenes are a nice bonus to a comprehensive package, but the action is the main driving engine behind Vice, and it delivers as much intensity as the little NES can muster (which is often a surprisingly high amount). 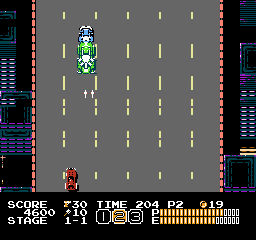 The main style of action that takes up 90% of the game is fast-paced action-platforming, which feels most similar to Tecmo’s Ninja Gaiden games on the NES. Quinn Hart runs about as quickly as Ryu Hayabusa, attacks about as fast, climbs ladders akin to the ninja, and even has a similar-looking life bar. He can’t jump off of walls and he doesn’t have ninja magic, but he fights his way through increasingly alien geographies with a bizarre assortment of enemies, just like how Ninja Gaiden‘s continuity among areas and their matching enemies were decidedly unorthodox; not that that’s supposed to be a criticism, as it does add a quirky charm to both games. Vice‘s first platform level alone has jiang shis (Chinese hopping vampires), dragonfly-bird things, spikebacked humanoids on all fours, and pumpkin-headed scythe-tossing ghosts, and ends with a giant rat man as the boss, who tosses iron girders at you. It gets even weirder from there on out and never lets up in its insanity over the course of the eleven levels. 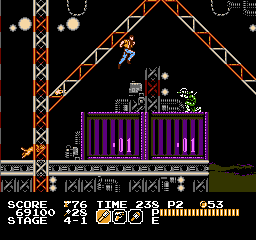 The action itself is straightforward, the goal is to survive and destroy as many enemies as necessary to get to the boss. You can collect coins after destroying enemies and rack up a hundred to gain an extra life, and you can prolong your life bar by grabbing drinks and meat. Hart has three weapons at his disposal: an awesome laser whip, a .44 magnum, and strong grenades. While the laser whip is permanent, bullets for the gun and extra grenades must be generated from dead enemies, with “B” icons holding ten bullets and “G” giving five grenades. The whip is likely to be used for most of the game, as it strikes as quick as you can press the attack button and it can do good damage if you’re fast enough, not to mention the slight striking arc in front that enables you to hit enemies slightly above you. 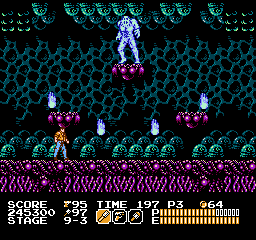 The magnum’s bullets travel about a third of the screen’s distance and do as much damage as the whip, but it can be a bit harder to use as the bullets fire slightly slower than the whip’s strikes. The grenades can travel nearly the entire screen’s distance, but they are tossed slowly and have a slight arc which must be accounted for when hitting long-distance targets. The gun and grenades should not be ignored, but being that their ammunition is limited, it’s best not to waste them with willy-nilly attacks that would best be left to the whip. Knowing when to use each weapon at the right time will save you ammunition and health in the long run. 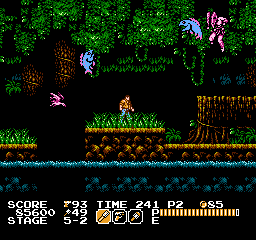 In addition to the sidescrolling sequences, there are two other less common action scenes that are also significantly influenced from other games. Two stages eschew the on-foot platforming for overhead hybrid driving/shooting sequences that feel lifted right out of Spy Hunter, or more accurately, Super Spy Hunter/Battle Formula. You don’t have to keep picking up fuel and you don’t get any further weapons outside of the car’s main gun, but you can switch between three different speeds. The car moves very quickly through the road and must avoid obstacles, shooting down enemies and steering clear of the highway’s edges. The very first level in the game is actually a driving level, an interesting way to start things off, though it can be jarring to have another driving stage when the only other one is the penultimate level. While sparse, these sequences are actually quite intense and enjoyable, and the first such stage shouldn’t be difficult even for gamers more accustomed to platformers than shoot-em-ups. 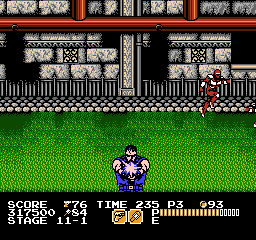 The other type of special action sequence is akin to a lightgun shooter, like Operation Wolf or the shooting sequences of Bayou Billy. At the end of the fourth level (in lieu of a boss fight) and at the beginning of the final stage, you see the action through Hart’s eyes and blast down punks who attempt to shoot you first. Some shoot at you from the background, some run up close and hit you at point-blank, and more agile opponents will leap at you with knives outstretched. With these sequences, you have to use bullets and grenades that you’ve built up from prior stages; one button simply shoots them using a bullet, while the other hits a decent-sized area with a grenade blast and wipes out all enemies caught in it. Destroying enemies causes them to drop more “B” and “G” icons to keep your ammo going, and they can also drop coins and healing items as in any other sequence. 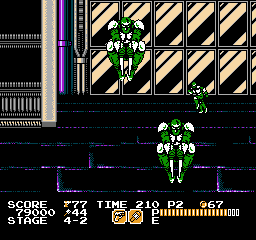 The NES Zapper is not compatible with these segments, but neither of them last very long and the controller does the job well enough. Like the driving stages, these shooting gallery bits are quite fun, yet it is a shame that neither of them last very long. The main sidescrolling parts as they stand are very good, but it would be nice to see the other two gameplay types utilized a bit more often. On the other hand, it could be argued these sequences are welcome breaks from the platforming and do not overstay their welcome, unlike other games which switch genres a bit too frequently and feel inconsistent or otherwise imbalanced, such as the aforementioned Bayou Billy. 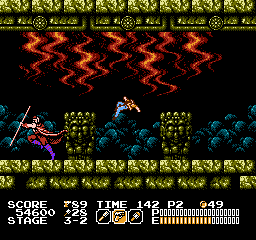 Even if one greatly outshines the other two, all three forms of play are great fun, even if they don’t have a shred of originality in them. But the least the game can do is appear different from its imitators, and Vice: Project Doom is an incredibly good looking game, appropriate for one of the later NES games released in the nineties when support for the old gray box dwindled in lieu of the SNES. Nearly every possible color that can be displayed by the system’s color palette is put to good use here, making the environments feel vibrant without appearing gauche. The backgrounds feel very active, as several of them make use of parallax scrolling to depict fluid movement between Hart and the horizon. Hart and the enemies are animated decently with the actual designs ranging from interesting to downright fubar, and there are a lot of neat boss battles awaiting you at the end of each stage. In what other game do you fight a Fu Manchu-esque wizard who wields a bo, a gigantic high-tech tank with its weak spot at the end of its turret, and a freakish multi-armed alien who clings to the ceiling and tosses down lightning bolts? 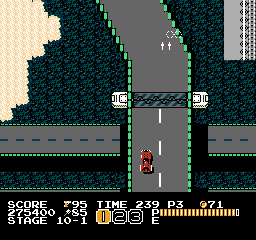 The bosses get increasingly tougher, though it tends to be the stages themselves that can be the trickiest to deal with. As with most other action games, crafty enemies team up with the ultimate obstacle – instant death pitfalls – to ensure your maximum frustration. Out of the game’s eleven levels, some of them are fairly short and the game can be beaten in less than an hour, but Hart’s journey is not easy. While not up to the legendary difficulty of Ninja Gaiden, Vice: Project Doom gets quite challenging the deeper in you go, and that’s not all on the enemies either. Killer foliage that regrows when destroyed, automatic ladders that move toward fans, and electrical pipes are among the terrain hazards Hart has to avoid in addition to the increasingly obnoxious enemies. The game runs on a steady difficulty curve that reaches its maxim at the final level as it should, and you must deal with foes en masse, disintegrating floors, and a doozy of a final boss. It’ll take several hours to learn how to get around enemies and traps, but infinite continues certainly make it beatable for the patient. 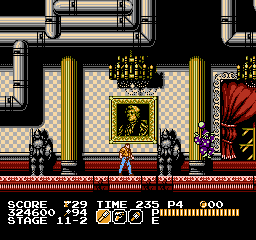 Vice: Project Doom scores high marks on nearly every end. The only part that isn’t an ‘A’ grade is the music, which is serviceable but nothing too catchy. There are a few neat tunes here and there (level 2’s track comes to mind), but the rest are not particularly notable. The soundtrack is good enough, but it’s overshadowed by nearly every other element bundled within a great overall package that, while not wholly original, definitely has its own design and personality. The game pace is fast, the challenge is high without being ridiculous, and the visuals are absolutely tops. Vice: Project Doom ranks up there alongside the likes of KickMaster, Shatterhand, and Little Samson as a definite sleeper hit and a hidden gem for the NES. 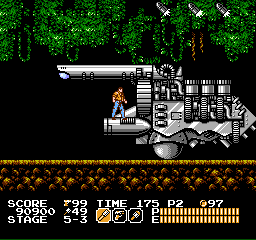 Interestingly, the regional covers rip-off different Hollywood actors. The hero on the Japanese version is plainly supposed to be Bruce Willis from Die Hard; meanwhile, the protagonist on the American cover resembles Mel Gibson (though no specific movie).