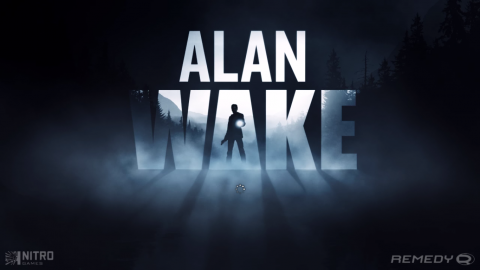 How do you follow up on a massive success? How do you follow up on a game that changed the entire landscape of the gaming world? This is what game studio Remedy Entertainment had to ask themselves after creating the first two Max Payne games, still fondly remembered as two of the best action games ever made, titles that started new trends in their given genre and lit the world on fire. It was only their second release. So, what’s next? Remedy decided to brainstorm ideas for a year or so, and then came up with a new next-gen concept that would completely change the wheel again, or at least hopefully would. 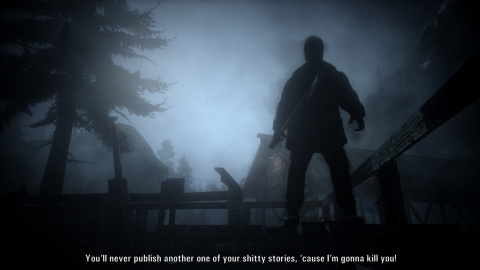 Alan Wake, Remedy’s next big thing, was first shown off in 2005, but didn’t get a release until 2010. It was a massive risk of a project, and looking at it now, one has to wonder how in the world they convinced Microsoft to back them on this. The game was divided up and portrayed like a TV show, its main influences were psychological horror films, Stephen King, and the work of David Lynch (especially Twin Peaks). The story was based heavily on one of the writers and developers of Max Payne, Sam Lake, and could even be read partly as him trying to convey aspects of his experience working on these games to the audience. But most importantly, Alan Wake, despite its action focused design, presented a story that ripped the forth wall into shreds and asked meta-physical and philosophical questions most games of this production level would never even think of approaching out of fear of alienating the lowest common denominator. With all this in mind, the heavy amount of product placement makes more sense, because that was the only way of making the rest of the funding needed without scaring off the publisher. 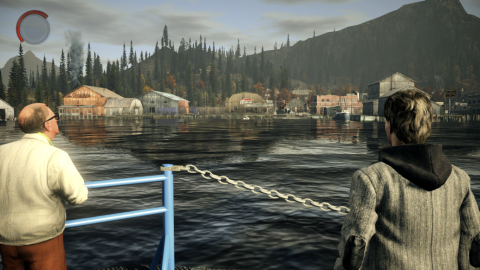 The story starts out simple enough. Alan Wake, a popular crime novelist, has a dream where he’s chased down by the villain of his current book in planning, possessed by some dark power. Light itself appears to save Alan and guide him, telling him to trials to come. When he awakes, he arrives in Bright Falls, a small town in Washington state, where it revealed he and his wife Alice are on vacation so Alan can try and deal with his writer’s block. They stay at a cabin on the nearby Cauldron Lake, but Wake’s dream starts to become reality, as the dark force in it becomes real and takes his wife. He awakes a week later, almost driving off a road, and eventually finds out that the cabin he stayed at doesn’t exist.

Also, he keeps finding pages of a manuscript around.

And they’re predicting the future. 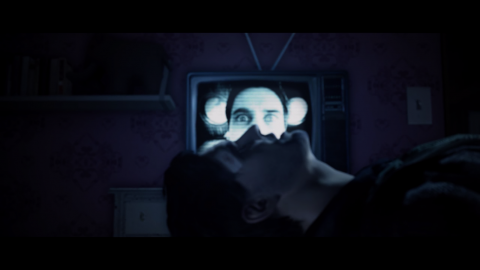 The game of Alan Wake is survival horror at its core. Wake has to find what he can in every area he visits to get out alive, or else he’ll quickly be killed by people possessed by the dark presence haunting him. Wake fights with some simple firearms, like a basic handgun or a hunting rifle, but his greatest weapon is always light. Wake can use a flashlight that he can further focus somehow, making the light stronger, but also using up battery power. You can’t hurt a possessed enemy until the darkness that controls them is weakened by your flashlight, so combat comes down to standing your ground the best you can to get the killing blows in. 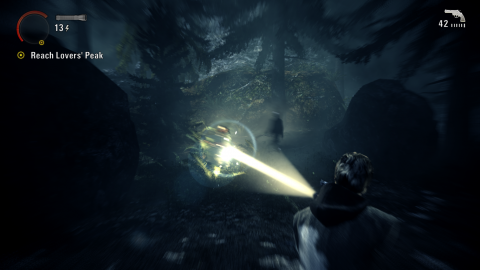 You also get secondary tossing weapons, like flares and flash grenades, which liven things up a lot. Flares are particularly good at creating a safe zone for yourself for a bit, and the flare gun is an instant win tool if you can find the ammo for it. The challenge is finding ammo and batteries, not to mention spotlights, where Wake is safe and can regenerate his health faster. There’s always enough to survive, but rarely enough to thrive, especially on PC. After complains about the easy 360 version, the PC version made its normal mode the 360’s hard mode, and the added challenge is welcome. 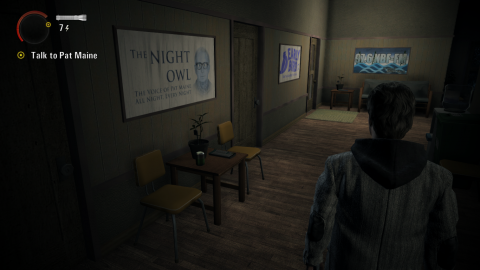 The streamlined, guided design makes every area a different sort of challenge to overcome, because you don’t always know what you’ll have. Even finding weapon caches doesn’t solve all of your stress, so you need to learn to aim. The game gets really creative with enemy types to, changing things up not only with different sorts of taken (those possessed by darkness), but also murders of crows and sentient objects that toss themselves at you. Alan Wake is like a mixture of The Suffering and Resident Evil 4, but with more set-piece moments to survive, and it’s a thrilling experience. The game starts properly spooky, but starts to become a tense, exciting action romp the further it goes and the more ridiculous events get, up to the point is starts channeling the comedic energy of Army of Darkness a tad. 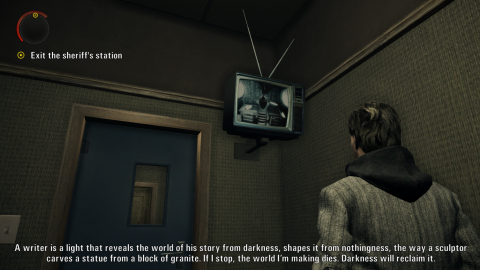 That might hurt its status as a horror game, but that’s where the narrative comes in and does all the heavy lifting. The twist of Alan Wake is that Wake himself is living out a story he wrote, trying to undo the ambitions of the dark presence that tried to make him write a story for it. However, his head is such a mess from the experience that he’s stuck playing catch-up with his own work. The world keeps tossing out all sorts of strange happenings, like Wake appearing on TV and mumbling about the writing process, and makes you question if Wake himself is losing his mind. It becomes clear that the reality Wake lives in is more absurd and existentially disturbing than one would initially expect, showing us a scenario where a man can gain the power of a god, but be limited by the rules and expectations of his own craft. 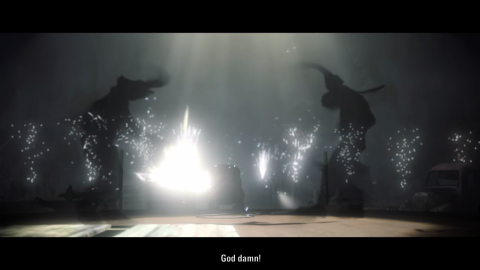 Enough can’t be said for how strong Lake’s writing is. There is barely any subtlety to speak of, but it plays with every single pretentious idea it has so well that it becomes a brilliant structural deconstruction of the art of storytelling itself. Nearly every character is instantly endearing or interesting, and despite the fact that they may not have as much control over themselves as they would think, you want to see them get their happy ending. There’s also a ton of Lake in Wake himself (GET IT), with Wake’s most popular work being based on a mean cop who chomps on painkillers (DIDCHA GET IT), but more importantly, his thoughts on being a writer. There are two large DLC episodes, called “The Signal” and “The Writer”, focused completely on Wake confronting his own insecurity as an artist, and a bit of it feels like Lake sneaking in his own thoughts, particularly the fear of actually being a hack who made it big by a complete fluke. The fact such a personal stamp could be made on a project this size is incredible in itself. 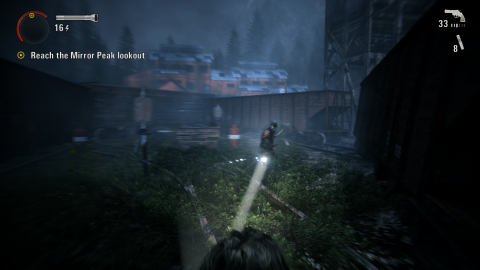 Making the package complete is Remedy’s masterful grasp of cutscenes, cinematic techniques, and sheer presentation and polish. Even on low PC settings, Alan Wake looks incredible. Every area in the main game is based off a real place photographed by the studio, resulting in a small town and state park that feel exactly like the real things, down to hiking paths, broken down cars in weed filled alley lots, and the scaled down architecture. There are also tons of effects that really add to the experience, like how the grass blows when the dark presence is near, or the complete disintegration of taken when they get covered by a spotlight, not to mention cool slo-mo effects. The cinematic dodge is hard to pull off to times, but it feels good every time by just the show-off look of it. 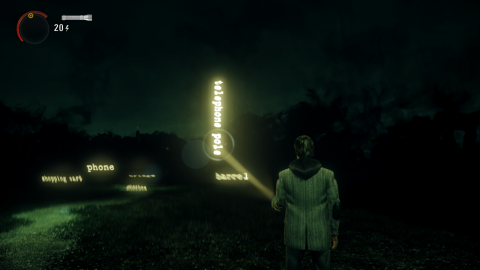 Alan Wake went on to sell over 3.2 million copies, though playing it now is a bit of a challenge if you want the superior PC version. Thanks to some licensed music in the game’s episode breaks, including David Bowie’s Space Oddity, Alan Wake was pulled from online storefronts on May 15, 2017 when the licenses expired. Those who bought it can still play it just fine, though, and the last few days it was up had it put on a huge discount. We never did get Alan Wake 2, but with unexpected revivals happening all the time as of late, we may still see it in time. However, we did get a sequel of sorts, a more action focused downloadable game that traded the woods of Washington for the deserts of Arizona…