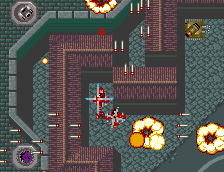 Ajax is a strange game. It’s almost like Konami wanted to make an arcade version of Falsion, but only got halfway done before they realized that it wouldn’t be done in time, so they stuck in several stages from fairly nondescript shooter to pad it out. Take note of the intro, wherein a jet fighter dramatically takes off from an aircraft carrier. Then, in the first stage…you’re piloting helicopters? What’s going on? 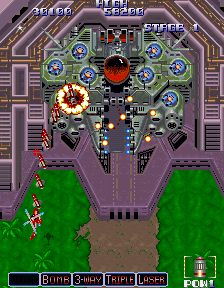 Five of the game’s eight stages are overhead, piloting these helicopters. Like Xevious and TwinBee, you use your guns for air-based targets, and bombs for ground-based targets. There are a couple of main power-ups, including a Vulcan cannon for spread shots, a multi-directional laser, and a regular laser, in addition to more powerful bombs. Some of the enemies feel a bit like they belong in Contra, especially with the multiple blinking red weak points. It almost feels like they tried to tie them together, especially since the game starts off flying over various places on Earth, before cruising over a blood red sea and then zooming off into outer space, fighting off some nasty  alien invaders.

Three of the stages are 3D, and these are where you actually control that jet fighter. These levels are very brief and feel more like bonus stages than actual levels, but they’re kinda cool nonetheless. The scaling is neat, although the effects are put to shame by Sega’s Super Scaler games like After Burner. The levels themselves are impressive, though. 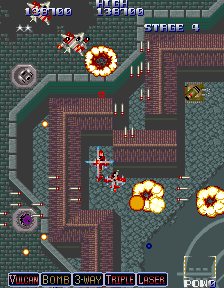 The first 3D stage has you dive bombing from the upper limits of the atmosphere down to attack an enemy aircraft carrier on the surface. If you don’t destroy it quickly enough, you’ll kamikaze right into it, though you will still have to start the stage over. The second 3D stage takes place in a canyon, and the third is a brief sortie against the alien base orbiting Earth.

Ajax is known as Typhoon in Europe, which switches around the order of the stages. The first stage in this version is the first 3D stage of the Japanese release, so the cinema of the jet taking off makes a little bit more sense. The first stage music is also different.

Due to the checkpoint-based resurrection system and limited credits, it’s quite difficult, and outside of the 3D stages, the music, and some cool boss designs, there’s little remarkable about it.

There was rumored to be an NES/FC port planned at one point, but nothing ever came to fruition, and no media of it was ever made public. It was ported to several home computers though, including the Sharp X68000, IBM PC, Amstrad CPC, Commodore 64, and ZX Spectrum. The X68000 port is the only version that does it justice, largely because the machine was fairly powerful, and also because it was the only port done by Konami themselves. The arcade game was made for a vertical monitor, but the playing field was shrunk for this port to accommodate a horizontal display, rather than pillarboxing the image. Other than this, it looks, plays, and sounds just like the original arcade game.

The DOS version uses 16-color EGA graphics and actually plays pretty decently. It doesn’t look that great, but it’s better than the other ports, although the PC speaker music is painful. Both the guns and bombs are set to rapid fire, but the enemies also attack more relentlessly than the arcade release, making it more difficult. 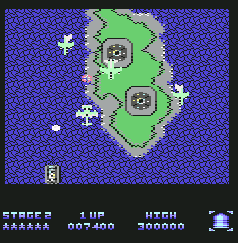 The rest of the computer versions are based off of Typhoon,  and thus use that game’s altered level order, with the Commodore 64 port coming out on top. They can’t quite pull of the 3D stages, but still don’t look too bad. The Amstrad and ZX Spectrum versions are basically identical to each other, and both are hampered by extremely sluggish speed and obvious graphic disadvantages. These ports are also all missing levels. 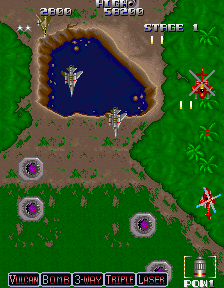 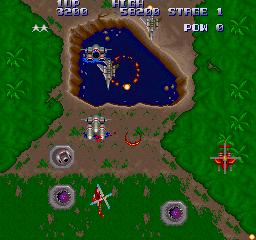 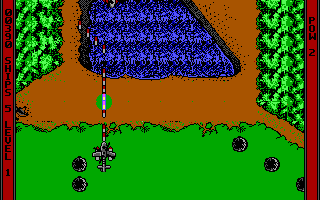 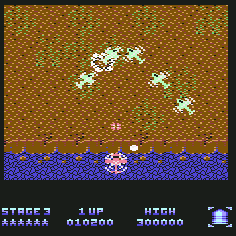 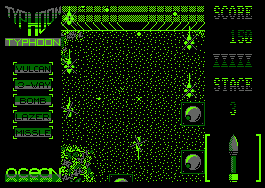 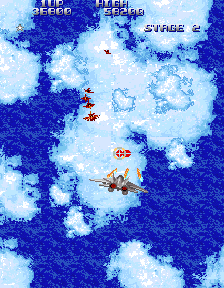 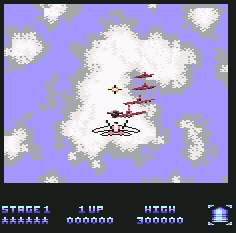