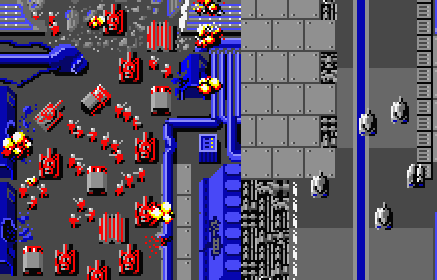 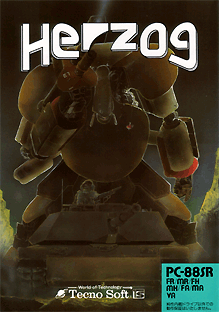 Before Warcraft, there was Dune II, before Dune II, there was Herzog Zwei, and before Herzog Zwei, there was Herzog. Technosoft – or rather, “Tecno Soft”, as they were known in Japan back then – released what’s referred to as one of the first real time strategy games for the Sharp X1, PC-88 mkIISR and MSX2 computers in 1988, a time when traditional strategy games were just becoming a thing and the RTS genre was basically nonexistent. Perhaps as a nod to that, Herzog calls itself a “Realtime [sic] Combat Simulation” game on its title screen, but behind this façade is a prototype to the entire real-time strategy genre – a clunky, extremely outdated prototype, yes, but a prototype nonetheless. 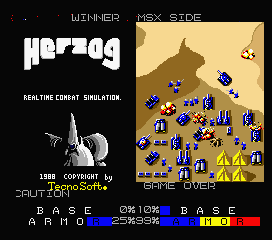 Herzog tells the story of the war between the neighboring countries of Mercies and Ruth in the far-flung future, with the player assuming the role of a Mercian general tasked with tipping the scales of war in your country’s favor in the game’s single-player campaign mode. Yes, Herzog has a campaign mode, and while its sequel shifted its focus to multiplayer matches, stage-based single-player play is the 1988 original’s main draw. When playing alone, you begin your quest for conquest in the Merciean capital of Vaxan, with each victory against the enemy forces pushing you deeper into Ruthian territory, with you and your army eventually crossing the border that separates the two countries and taking over Ruth’s capital, Remerje. The multiplayer mode changes this formula up a bit by making both players begin their war efforts right at the Ruth-Mercies border, with each victory pushing the opposing player further back into their own territory; the game ends when either player is defeated at their country’s capital. 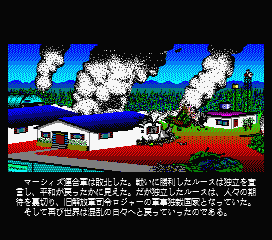 Despite the plot’s grandiose scale and the presence of a fairly detailed world map displayed in-between stages, Herzog’s gameplay is quite simple, linear and un-grandiose. The large, open maps that its successors are known and loved for aren’t present here, with all nine of the game’s battle arenas being canyon-like affairs with the Merciean base on the south and the Ruthian one in the opposite direction (a format which AirMech would later expand and experiment upon). When deployed, units will follow a straight path to the enemy fortress, only deviating from it in order to assume a better firing position once they spot an enemy. Since neither your or your enemy’s base is visible on-screen at any time (a measure tied to the MSX2/X1/PC-88’s limited processing power, perhaps?), all units’ objective is basically going from one end of the narrow playfield to the other while avoiding enemy fire, giving the opponent’s base a certain amount of damage upon reaching it. Once the opposing base goes boom, the winning player proceeds to the next stage, with the loser either being pushed further back into their own country of choice or getting kicked back to the title screen. 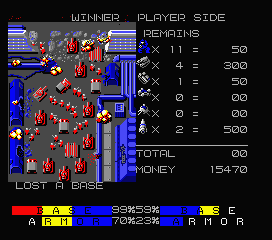 Even when compared to its direct sequel’s, Herzog’s selection of available units is pretty small. Since capturing enemy bases isn’t an option here, foot soldiers only serve as cannon fodder for your enemy’s offense, while tanks and the occasional Side-Car (basically this game’s version of the Speedbikes from Zwei) will be your go-to units for most of the game. Spamming endless waves of Tanks and Side-Cars while occasionally sending some Anti-Tank Guns and AAM (Anti-Air Missile) Carriers into the field is a viable strategy here, but the real star of the show here are the Grand-Slam Missilies, (theoretically) huge, hulking, costly nukes that, when fired, very slowly traverse the battlefield in an unstoppable death march that ends with the instant destruction of your enemy’s base, regardless of how much health it had the moment the missile hit. These doomsday weapons can only be destroyed by colliding headfirst with an enemy’s own Grand-Slam, but since the game offers no visual representation of them other than a tiny blip on the on-screen radar (which can be either easily missed or misinterpreted as a graphical glitch by inattentive players), it’s often very hard to judge their trajectories, which means that players who find themselves on the receiving end of a Grand-Slam assault always have a strict time limit to worry about… unless they are willing to dough out the Gold to counter the enemy’s missile with another missile of their own, of course. 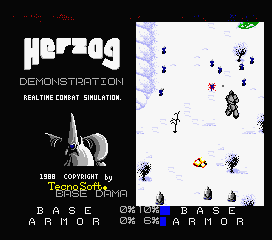 Blue dots on the radar represent friendly (Merciean) units and Grand-Slams, while red ones represent player 2’s forces (or the CPU’s, in this case). The radar is highlighted in this picture for clarity.

Herzog’s historical importance is undeniable, yes, but even when compared to Herzog Zwei (which was released less than a year later for the Mega Drive), Technosoft’s original RTS feels extremely clunky. The game suffers from a lack of variety due to its overly simplified battle arenas, tiny selection of available units and slow-as-molasses pace (which only gets slower the more units are present on-screen, in one of the most infuriating cases of slowdown out there), and even the player-versus-player mech action the series would later be known for feels very unpolished here, with Commanders not transforming into jets when flying over the battlefield and generally feeling even jankier than their Zwei counterparts – the fact that the game was made with two-button joysticks in mind (which further complicates simple actions such as accessing the production menu and carrying units around) doesn’t help, too. The only truly interesting aspect of Herzog’s gameplay (other than the Grand-Slam missiles and how utterly game-breaking they are) when compared to its sequel is the ability to launch a burst of homing missiles aimed at your opponent’s Commander when carrying an AAM Carrier in the air, a mechanic which Carbon Games’ AirMech would later include as a standard ability of the MOBA/Online Action-RTS’ Striker class of mechs. 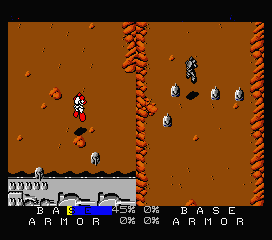 Herzog is a relic of its time, a game whose then-innovative ideas and features would later be expanded and improved upon by countless successors and imitators, with the game itself nowadays being little more than a curiosity for fans of Technosoft and the RTS genre.