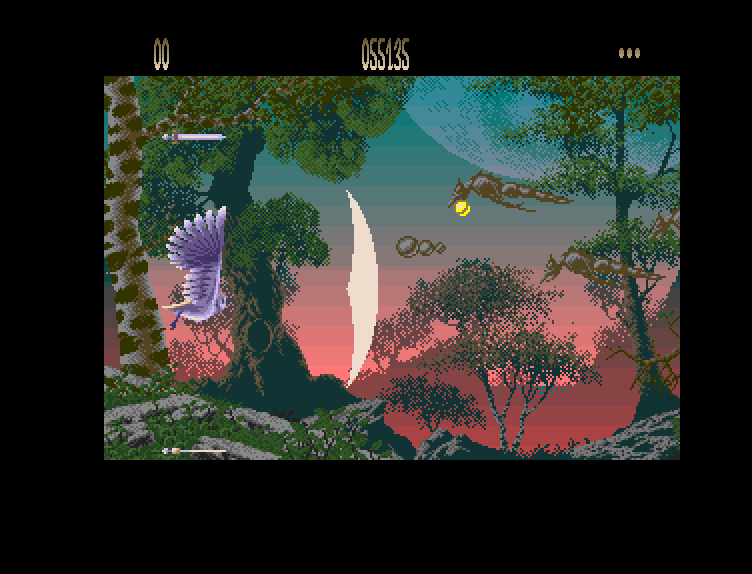 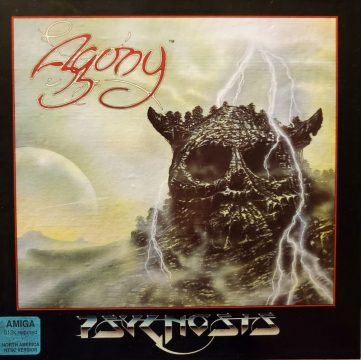 Back in the late 1980s and the early 1990s, Psygnosis had a reputation for publishing games that squeezed the Amiga hardware like no other. Agony was a perfect fit and saw its release under the Psygnosis banner in 1992. The game was developed by the Belgian studio Art & Magic which had previously worked on the Amiga title Unreal. Unreal already featured some graphical trickery, but it was with Agony that the team would truly create a technical masterpiece. The name Agony was chosen because it sounded cool, and also because its initial letter ‘A’ would ensure it being featured at the top of alphabetically ordered games lists in magazines. This was a lesson the team had learned from Unreal which had always ended up at the bottom.

During development, Art & Magic set out to surpass the then famous parallax scrolling of Shadow of the Beast, also a Psygnosis title, which showcased what the Amiga could do in the right hands. While Shadow of the Beast’s scrolling was impressive, its parallax layers remained on separate planes. Agony programmer Yves Grolet came up with a new technique featuring three overlapping layers, something which was unheard of on the Amiga at the time. Just one month in development, the team presented their prototype to Psygnosis representatives at the 1991 European Computer Trade Show in London. Psygnosis then showed the prototype to the developers of Shadow of the Beast who were blown away and couldn’t figure out how the scrolling was achieved. The next day the team signed with Psygnosis. 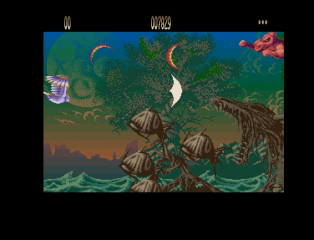 Agony’s story starts with Grand Master Sun Wizard Acanthopsis discovering the ultimate magic spell ‘Cosmic Power’ after years of research. The discovery of this spell, which contains the secret of the creation of the world, has taken an enormous toll on Acanthopsis. Knowing that he is going to die, Acanthopsis decides he must pass on his knowledge to either Alestes or Mentor, his apprentices. Alestes, being the wisest, wins the test that Acanthopsis devised to choose the guardian of Cosmic Power. Mentor, driven mad by anger, steals the spell and flees to faraway lands while unleashing waves of malicious creations. Alestes transforms into a magical owl to fight Mentor and retrieve Cosmic Power.

Originally, the story of Alestes was to be told via an extensive animated intro which, according to magazine previews, would last more than six minutes. Due to space limitations (the game itself was already three discs and Psygnosis felt another disc would make manufacturing to expensive) and the realization that the intro was perhaps too ambitious, the intro was never finished. While graphics artist Marc Albinet already had a dozen story board sketches with sets and characters finished, Agony ended up with nothing more than a brief text explaining the backstory. Years later, Albinet publicly shared his story board sketches which offer a fascinating glimpse of the intro that never saw the light of day.

Despite absent intro, Agony oozes high production values. The title credits, which feature the owl mascot of Psygnosis, a drawing of a wizard introducing Art & Magic and the logo of Agony itself, are in gorgeous hi-res pixel art. The menu screen features a beautiful ‘painting’ of a burning tree in a desolate landscape drawn in the Amiga’s 64 color mode. Five more of these ‘paintings’, each of exceptional quality and signed by graphics artist Franck Sauer just like real pieces of art, are feaured in the game in the form of loading screens between levels. In an interview Sauer recalls he was inspired by the Hudson River School, a mid-19th century American art movement of landscape painters whose aesthetic vision was influenced by Romanticism. On Youtube, awesome videos can be found of someone making pastel paintings of Agony’s loading screens. 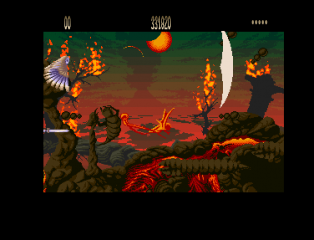 Agony is without doubt the best-looking shoot-em-up on the Amiga. It features six fantasy themed levels such as a raging sea, a gloomy swamp and ruin-littered mountains. All look gorgeous, exploding with detail, colors and animations. The owl itself, which is actually the one from Psygnosis’ logo, is an eye catcher and moves incredibly fluid. Sauer based the animation on the owl featured in the intro of the movie Labyrinth. Three layers of parallax scrolling offer a great sense of depth further enhanced by numerous animations such as crashing waves and waterfalls cascading down mountains. Agony also features a palette-swap trick utilizing the Amiga’s graphics co-processor in which two sets of color gradients are swapped every other frame, each being slightly offset from the other. When running at 50 frames per second this gives the illusion of a smoother gradient with more colors on screen. This looks great on an actual Amiga but unfortunately is not reproduced well on emulators and screenshots.

Despite all its brilliance there are visual shortcomings. Some enemies, including the end bosses, have little to no animation frames. This was a direct consequence of the large number of owl frames which left less memory for enemy animations. More bothersome, however, is that certain enemies use a color palette which blends them in with the background. For shooters this is never a good idea and in Agony it really affects gameplay.

Psygnosis advertised the game as having ‘an exorbitant soundtrack’ and contracted no less than eight of the best Amiga musicians of the time to make the music for Agony. Particularly memorable is the menu music which is a beautiful classical themed piano track written by Lemmings and Shadow of the Beast 2 (and 3) composer Tim Wright. This track famously features a note in the wrong octave which happened when the team swapped the piano samples delivered by Wright with higher quality ones. One particular note was not playing because the higher sampling rate limited the amount of pitch change the Amiga was capable of doing during playback. By transposing the note one octave below, this issue was solved, resulting in a song that was different than originally envisioned. Regardless, the song sounds terrific and received lots of praise. Apparently the (then) keyboardist of Norwegian black metal band Dimmu Borgir also liked the track, because he plagiarized it on their Stormblåst album (released in 1996) without giving proper credit and bothering to tell the rest of the band. 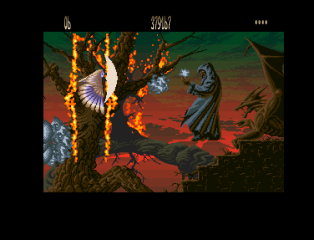 The in-game music was written by Jeroen Tel, a musical legend on the Commodore 64, who was asked to compose tracks with an orchestral and bombastic quality. His tracks can be described as intense, powerful, foreboding and dramatic; sounding unlike the score of any other shooter. While they are not catchy tunes, they do fit the fantasy setting and propel the action. The soundtrack of the first stage in particular is insanely bombastic, even to the level where it is almost too much, yet somehow matches the dramatic setting of the raging sea and pouring rain. Tel’s music for Agony was generally received well at the time although it is something of an acquired taste. The subtler side of the soundtrack is present during the loading screens, complementing the evocative art and making waiting times somehow an enjoyable experience. The in-game sound effects are limited with satisfying shooting sounds but somewhat weak sounding explosions.

In terms of mechanics, Alestes has only one type of shot, an echo-location projectile, which can be powered up by collecting magic potions. Power-ups are incremental with each death knocking them down one notch. Alestes can also briefly activate spells such as homing shots or shields by collecting magic scrolls which can be activated by pressing the spacebar or holding the fire button. This opens a menu system which temporarily freezes the action. Also, Alestes can carry two ‘drone’ swords that deal damage when in contact with enemies. The game starts with three lives and features instant respawn upon death. There are no continues but there is an extra life to be gained every 8000 points.

Gameplaywise, Agony is decent but not stellar. Its strengths are tight controls, good collision detection and a balanced difficulty curve. Bullets are clearly visible and there are many different enemy types which keep things varied. Yet, the screen often feels cramped as enemies have relatively large sprites and tend to flood the screen. The owl’s hitbox is also quite big and its flapping wings leave the player guessing about its actual size. It doesn’t help that enemies are often difficult to see. Unlike most horizontal shooters, Agony does not use terrain as game mechanic resulting in a missed opportunity for more gameplay diversity between stages. The absence of difficulty levels and lack of weapon variety means that replay value remains limited.

What remains is a game that is not remembered for its gameplay, but for its impressive technical and artistic qualities. In that sense, Agony is a testament to the capabilities of the Amiga and the team that created it. On those merits alone, it is a game worth checking out.