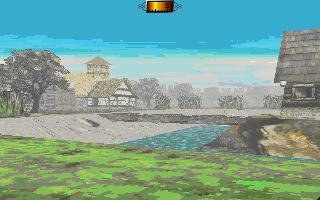 The final episode of the trilogy leads the tested band of adventurers to the eponymous harbor town Riva, where a complex mystery with the much discriminated clan of the Holberkians at its center unfolds. The Holberkians are elven-orcish hybrids, who used to serve the town by arranging trade and negotiations with surrounding orc tribes. In consequence of the hysteria around the orcish invation of the the Svelltdale, however, much suspicion has grown against them. Most humans moved far away from the now ghettoized minority’s housings, and their lives have become less than save, thanks to conspiracy theories and lynch mobs. Upon their arrival in Riva, the heroes are hired by a priestess to investigate the role of the Holberkians in the orcish activities around town. Soon they stumble upon a complicated network of intrigues and entanglements around a mysterious guild and its “trademaster,” an elven vampire, pirates, worms and a gloomy rat hunter.

Shadows Over Riva is the first and only part in the series with none of the pen & paper writers involved, so Attic could concentrate on creating a plot well-suited for a computer game this time. On the flipside, this means they took a few liberties from the original game world, the events and elements that are not present in any official The Dark Eyepublication are explained away by making the quest a top-secret mission whose circumstances and consequences never become known to the outside world.

Attic also tried to streamline the gameplay itself to better fit the requirements asked from a computer game, rather than relying all too much on its pen & paper groundwork. The adventure is composed much tighter, stylistically as well as in the actual terrain covered. Throughout the game, the party is never allow to leave Riva and its immediate vicinity. This of course eliminates the travel mode, which was loved by the hardcore fans but earned the previous games a lot of critique from mainstream audiences, especially on the international market. In consequence, most of the skills required during travels become useless in this game. Attic tried to counter this (and the overall problem of useless abilities) by integrating skills into events and encounters through the main quest more often, but most of them are once more limited to picking one character from the group for some entertaining episode, rather than serving an actual purpose. 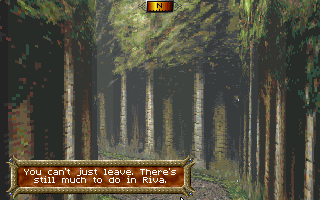 No way out of here

As always, the final save from Star Trail can be imported into the sequel, this time even without any major bugs to fear. Yet the English version for some reasons converts all characters’ experience points back to the original dimensions. But instead of a more or less complicated algorithm to determine the equivalent amount of experience, heroes are just assigned a fixed value for their current level. This can be very frustrating for heroes that were just about to reach a new level at the end of the former adventure.

As soon as the game starts, it’s easy to forget about it, though. The game is slanting much more to the adventure game side, the quest being all about solving a criminal case and exploring the town of and its surroundings. This means character levels don’t matter that much anymore. Other than the rather generic settlements in the former games, Riva is crafted as a very unique town (and follows closely the description in contemporary pen & paper source books). Movement is now completely free and feels much more natural, with comfort features like strafing added.

Even today, few RPGs towns manage to convey such a breathtaking atmosphere as Riva, even though still not a single soul is displayed in the 3D window. In fact, this only strengthens the oppressive mood of a town bending under the suspense of suspected treachery and the menace of invasion. Attic was obviously going for a horror vibe with this game, and some of the dungeons are genuinely creepy. The 3D view can now also be enjoyed in full screen, although that makes maneuvering the menus a bit bothersome. It is totally worth it, though.

Riva in all its full-screen glory

Almost all inhabitants of Riva can be visited in their homes and questioned about the case, and each of them has an individual drawn portrait to go with the conversation. Some of those drawings are a bit more than just inspired, and so they invite for a fun spot-the-celebrity game.

The game also supports 640×480 resolution, but it is only used for the ingame help system and a few hi-res illustrations. Most of them are there to depict Game Over scenes, but sometimes important story points are also presented this way. Shadows over Riva could have been the visually most well-rounded part of the series if it wasn’t for the occasional render image and of course the FMVs, which, like most cutscenes from around that time, have aged terribly and stick out as very inappropriate. 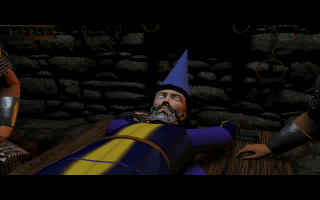 90s developers had yet to notice how ugly their renders were.

Once again Attic didn’t tinker too much with the formula for the tactical combat, only the automatization options got expanded upon a lot more. When entering computer combat mode, now the player can adjust the settings for the use of magic and ranged weapons for each individual character. It is also possible to have the heroes switch the weapon type only when necessary, for example when they’re caught surrounded with a bow in their hands. The game deactivates auto combat for some boss fights, tough. Unfortunately, exactly those are boringly easy more often than not. 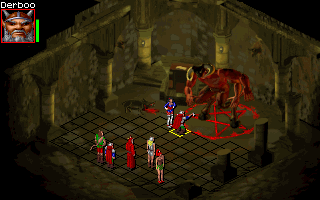 Big enemies are still glued to their position.

The most significant improvement for the interface is the item distribution tool. Whereas items used to be just dropped into the inventory of the first available character, now the player can easily and swiftly manage the inventory of the group whenever equipment is picked up, bought or sold. Additionally, containers can finally be used to store temporarily unneeded stuff, which takes a huge burden off the limited space available. This feature has to be deployed with care, though, as many locations – and with them the containers there – get locked off during the course of the adventure. 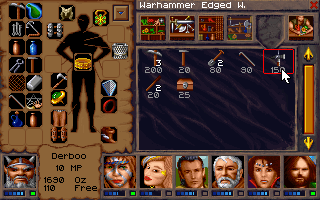 As was to be expected in 1996, the game was released exclusively on CD-ROM, which makes Shadow over Riva the only game that is always contained in its definitive version in compilations. On the flipside, it is also the only game in the trilogy with noticeable load times. They’re not very long on any reasonably fast system, not even when played through DOSBox, but with the frequent change of locations and menu access it tends to get annoying nonetheless.

Riva also contains the complete detailed manual inside the program itself, which lends itself ideally for digital distribution. The help pages are presented in VESA high resolution, and the interface is comfortable enough to make the online help a viable option even if a printed manual is available. 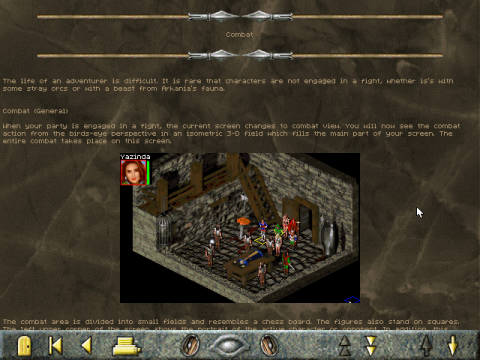 The help pages are printable as well.

Sir-Tech’s English version was released in early 1997. Internationally, the game earned a lot of criticism for its outdated presentation – while the title was marketed as a budget title in Germany and sold through the low budget publisher Topware, the International version retailed at full price.

Shadows over Riva does a lot of things different than the first two games, and feels a whole lot more like an adventure RPG (after the first two titles were advertised as the remedy against this trend). Some fans of the series have shunned it because of that, but it really is a valuable addition to the Northland Trilogy specifically for being different than the other games, and its atmosphere and narration are by far the most dense among the three games. The game has a handful of more objectively problematic issues, though: Riva is an amazing city, but halfway through, the developers obviously ran out of interesting things to do in it, and the last portion of the game becomes a downright dungeon rush. At least most of the dungeons are well designed, with only one, really boring exception, but that one can luckily be skipped for the most part. Especially aggravating are two or three time-activated encounters, as it is not made clear that all the player can do to advance the plot is to run around and waste time for quite a while.