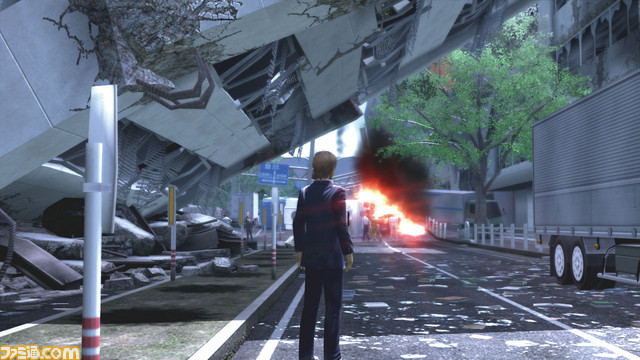 The fourth game in the Zettai Zetsumei Toshi series promised an HD current-gen overhaul with all the trimming. Irem were promising 3D, Move and 5.1 sound support – it looked to be their most ambitious title to date. A trailer was released, showing the epic scope of the city, detailed textures, and what appeared to be a robust engine for handling destruction of the environment. It looked incredible, and depending on who you ask, it was either in the final stages of being completed, or was complete but undergoing some minor tweaks prior to launch.

This report on Adriasang detailed what it would contain: “The game takes place in a big city in the year 201X. It’s July, the heart of summer, and your character is visiting the city for a job interview. The city is suddenly hit with a major earthquake. Your goal is to escape the destroyed city, finding safe paths through collapsing buildings and dealing with panicked and fleeing people.
* The game will feature over 60 characters, the largest in series history. You’ll need to work with these people to escape.
* You can enter collapsed buildings, within which you’ll find survivors and additional escape routes.
* You’ll find new items, including crutches for when your legs are injured.
* The game has a new “cleanliness” parameter for your character. If your character gets too dirty, your stress will rise. To increase your cleanliness parameter, you need to… Use the toilet!
* You’re free to customize your character. At the start of the game, you can set gender, face style, and hair style. As you work through the game, you’ll earn over 100 clothing items, including suits and casual outfits.

Sadly after on March 11, after the 2011 earthquake and tsunami in Japan, it was cancelled. Irem never went into detail about why, but given that the story revolved around someone trapped in a city destroyed by an earthquake, the implications are obvious. Soon after this Irem also set about deleting their back-catalogue of games from download services, and shutting down their websites.

Series creator Kazuma Kujo left Irem shortly after the cancellation to form a new company, Granzella, though he states this was no due to the cancellation. After this he began tweeting about the cancelled game, revealing much of what it would have contained. Adriasang then posted an article with these details.

“This latest entry in the series was being made with a different mindset from past Disaster Report games. Past titles were about the first one-to-three days following a disaster. DR4 was to be about living in a city for a week following a disaster. The main character was to meet with a variety of people and partner with them — another change from past titles, which put players with a fixed partner for the course of the game. The city in DR4 was full of people. One map had sixty or so in the vicinity of an intersection. The development staff was in the final phases of development, working on speeding up the code to handle the load, when the game was cancelled.”

“One result of being the city for so long is that you’d get to visit the same area multiple times. The game would have allowed you to visit some areas two or three times, and you’d get to see the city begin to recover. The game showed the aftermath of the disaster, from workers beginning to clear waste and cars from buildings and streets, to people taking shelter in evacuation areas at night. There were people returning to their destroyed homes to recover their family possessions, and a girl searching for her parents and brother. There was even an old man who’d started up a makeshift udon stand on road.”

“Outside of the physical effects of the disaster, the game was going to tackle some of the social effects, with racism and age discrimination in the evacuation areas. There was also a mysterious group that targeted victims of the disaster. With Disaster Report 4, Kujo had hoped to show that the real difficulty of a disaster lies after the disaster itself. “

The sad irony is that while the earthquake took place on March 11, the game had originally been slated for release on March 10, but had been delayed. In an interview with GamesTM magazine, Kujo explained how close it came to release:

In a subsequent interview with 1UP, Kujo elaborated on this:

“For us the fundamental theme was earthquake and tsunami. This may sound imprudent, but we were trying to simulate in our game what happened in reality on March 11. So, we can’t say the effect on our game was small.” He then explained the decision to cancel it: “The development of the game was behind schedule. This is something that the business side of Irem and I both agreed and I have no problems with this decision, but there was no way we could have released the title after that event in March. So, we discussed, well, can we release it three months from now? Six months? There was no way we could decide on something like that after the earthquake. We also couldn’t continue to tell the press and public that we were working on a title that we couldn’t set a release date to. So, our only option was to cancel the title. That’s what was discussed and decided between management at Irem and myself.”

Not that Kujo was happy with the decision, elaborating on Irem’s reluctance to discuss the subject:

“But, we were already making a game about earthquake disasters when it happened. So, it’s nonsense that because it actually happened suddenly it’s taboo to make a game about the topic. And, the games included information that is helpful in surviving an earthquake. But, after seeing the extent of the disaster, it just became impossible to release that game. But in the announcement of the cancellation of the game, it doesn’t say anywhere that we cancelled the game due to the earthquake. Other companies said in their announcements, ‘Due to the earthquake, we have delayed the game.’ But, it doesn’t say that anywhere in Irem’s announcement.”

The GamesTM interview detailed some of the public’s reactions, as Kujo explained:

“After announcing the discontinuation of development, Irem received a lot of mail. Most of those emails asked to stop Disaster Report 4’s discontinuation. Currently, it’s a difficult time to launch the game, but please release it someday. A game like this serves as a disaster prevention manual, it contains information to help in an earthquake. Because there are many earthquakes in Japan, in order to understand the severity of the situation caused by a disastrous earthquake, we need this game. That was the general content of the emails. Even now, at Granzella, we get emails asking us to create a Disaster Report title. I feel it’s my mission to come out with a disaster game. I founded Granzella to do so. So please look forward to Granzella’s future work.”

As revealed in the 1UP interview, he received over 500 letters:

“After the 14th when we announced the cancellation of the game, we received 500 letters asking us to withdraw the announcement. And, we (Nishiyama and I) read all 500 letters. And, about a week after the earthquake we even received a letter from the earthquake and tsunami victim. There was a government employee who wrote saying that they were writing from a disaster struck area but not to cancel the game. And that’s when I felt that we shouldn’t cancel the game. But, could I have released the game then? Probably not. I was scared to release the game. Irem can no longer release that game. But, not me. When I read that letter, I strongly felt that someday I have to release that game.”

Unfortunately Irem still holds the rights to the series and has no intentions of releasing the fourth instalment – in fact there have been rumours they may have even deleted the entire thing. Kujo has addressed this in his Twitter feed, expressing regret if Irem have. He has though tweeted the entire story of the game, as a final farewell to fans. A compilation is HERE. Given that Irem has abandoned video games to focus on pachinko, it’s unlikely we’ll ever get to play Zettai Zetsumei Toshi 4. Even if a beta copy, burned to Blueray for debug purposes, somehow surfaced, you’d need a CFW PS3 to run it. And there would be no chance of sharing it online like with previous generations of leaked games, given the quantity of data. Such a precious item would, sadly, be traded for high prices among collectors.