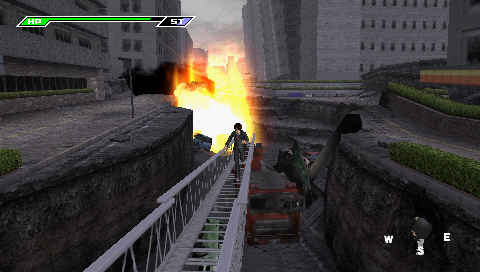 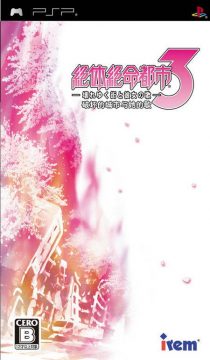 Another sequel (albeit one that never left Japan), and another overhaul to the survival system. Instead of hydration or cold like in previous games, ZZT3 implements a “stress meter” which goes up as you encounter stressful stimuli. Seeing dead bodies, getting hit with water or fire, and falling down, among other things, will cause the little blue ST bar to increase. As it moves into your green HP bar your health deteriorates, so even if you alleviate stress by drinking water (thereby shrinking the blue bar), you’ll find your HP level also reduced and requiring either a save bench of medkit to restore. In addition, there’s also quite a bit of platforming now, requiring some (usually) fairly easy jumps.

The other major overhaul is now the choice of two characters at the game’s start, either the male Naoki or female Rina. The general story arc is the same (both are university students entering the city when all hell breaks loose), but their interactions with characters, endings, and clothing collectibles are unique. Those of Rina are especially humorous since you can flirt with your fellow female characters for some awkward results. It starts with each aboard a bus, and after the earthquake hits whichever character you’ve chosen needs to escape the tunnel they’re trapped in. Along the way co-survivors Saki and Ayami join the party, mysterious gunmen are encountered, and by the end the usual revelations of greedy corporations ignoring safety warnings come to light. Turns out Central Island City is slowly crumbling into the sea – and in three days it’ll all be over.

One of the two selectable characters at the start, Naoki is a 19-year-old university student arriving at Central Island on a bus when the earthquake hits. The only survivor of the overturned vehicle, he meets and helps other survivors while trying to be rescued.

The second selectable character, Rina is 18 and also a university student. Being female, she can befriend the two female co-survivors leading to several yuri (mild lesbian, or “girl love”) moments.

One of the two main co-survivors which, if befriended, will result in one of the good endings. She’s a 22-years-old nurse who dreams of becoming a musician and singer – throughout the game her music will help soothe those around her.

The other main co-survivor, you can befriend her instead for a different ending. A shy and softly spoken high school student, she’s the daughter of Daigo Hazuki, head of Hazuki Construction which built the island.

When you first meet this guy he’s a pointing a gun in your face, having seemingly gunned down Morita, one of those involved in the island’s construction. It’s eventually revealed that Hikawa is a police detective, but there’s a lot more to this guy below the surface.

A geologist who tried to warn people of the island’s dangers and was victim of a smear campaign by Hazuki and Morita in order to silence him. Helps survivors still trapped on the island, but is that all there is to him?

Chief of the Morita Group, one of Central Island’s developers alongside Hazuki. Was aware of the dangers when the island was being built. Met briefly in a tunnel at the start and soon after found dead.

AKA Sophia Briggs from Raw Danger. She’s a reporter investigating the safety cover ups by the Hazuki Construction Corporation during building of the island.

AKA Kelly Austin from the previous two games. A teacher looking after a group of students taken hostage by thugs. You can either save her life in a burning building, or leave her to die in order to collect a key item.

Mentor to Saki, you meet him briefly in the hospital by the bedside of his terminally ill wife.

In spite of the additions to the traditional ZZT formula, there is no denying that this is the weakest entry in the series, especially after the magnificent and perfectly orchestrated second game. The stress meter, while clever in theory, is weakly implemented. Because it’s apparently affected by so many different stressful stimuli you’re never quite sure why it’s rising, and it never rises particularly fast nor to a great enough degree to create tension. Only if you dawdle for a long time does it require attention. Likewise the extra character is a clever idea, but it just warrants replaying again while following precisely the same routines as before – at least when there was one character your first couple of playthroughs could focus on befriending different survivors, followed by playthroughs of being a jerk. The “girl love” moments are kinda funny, but the number of replays has been arbitrarily doubled. This is made worse by the lack of localisation – without fluency you’re going to miss all the fun anyway, so you’re better off just reading the online guide to see how things can play out.

Items this time around are also almost redundant, apart from a few key items. You will probably never need to use any of the food or first aid kits, unless you’re making a conceited effort to play badly. There are also less things to find than previously, meaning you’re unlikely ever to max-out your inventory limit. Furthermore, although you can combine items like in previous games to make new tools, there appears to be so few combinations available, none of which are any use anyway, that you may as well ignore this aspect entirely. All of this is actually a good thing, since the inventory screen is combined with your clothing options and there’s no sorting option, so by the halfway mark you’ll be manually sorting through dozens of shoes, gloves and hats just to find a candy bar or juice drink.

In addition, there is no longer a need to share items with your survival partner. Although there is a “give” option in the menu, it’s almost never used – the one major event is to give a CalorieMate to a hungry mother and daughter. Although the need to use items is less than in previous games, there are more high-difficulty areas with instant Game Over traps this time round, necessitating several restarts. The penultimate sequence set on a stairwell with fixed camera is especially annoying, since you need to make a series of tricky jumps almost blind and against a strict timer. Thankfully continues are infinite, and you can easily finish the game in under 8 hours first time.

Another thing sadly missing is vehicles; whereas the first two games featured a handy bicycle and some incredibly fun jetski sections, plus other vehicles like rafts, the third game is purely on foot and less interesting because of this. As mentioned there’s also no English localisation or fan-translation, forcing you to rely on print-outs of the online guide. Although the guide we link to is expertly written and gives maximum enjoyment while playing, the language barrier does take away some of the series’ charm. For example there are genuine survival instructions given throughout the game which, apparently, were provided by the Japan Disaster Information Support Network. The range is vast, dealing with everything from why phones won’t work in tunnels to dealing with fires and so on.

Having said all this, if you’re a fan of the first two games this third installment is still essential playing to round off the series. Just a pity it has to end on a low note. If you’ve never tried a ZZT game before, this is not the one to start with. It’s also worth mentioning there’s a brief 60-second stealth section later on, which actually works really well.

WORD OF WARNING: During the course of play we encountered a fatal game killing glitch, which we subsequently couldn’t replicate. After a chase scene by some thugs outside you’ll be separated from your friends and will find a bench. Save here and keep that save file spare – DO NOT overwrite it. Next will follow the short stealth section and three dialogue choices inside a building. During our playthrough, after the dialogue choices we examined some rope, a hole in the ground, and then afterwards were unable to collect the rope, effectively trapping us in the room. After examining the hole you should be able to knock the rope down with a Circle Button tackle – if the flag hasn’t been triggered and you can’t get the rope, reload the save from just before the stealth section.