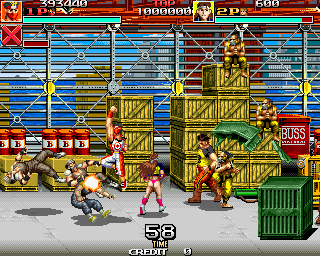 The Japanese developer Seibu Kaihatsu is famous as a shoot-em-up creator thanks to their hugely popular Raiden series, but their catalogue wasn’t without a few outliners. Zero Team is one such game, Seibu’s answer to Final Fight and their only venture into the genre. Perhaps seeing Capcom was raking money with all the iterative games, a number of Seibu staff quickly put together Zero Team before most of them moved on to the development of Raiden DX. The game used to be considered a lost title, because of the lack of a port and the board’s unique encryption that prevented it available to the public for intervening years, but in 2016, it finally reached playable status on MAME.

Somewhere, the mysterious forces have decided to establish their dominance by kidnapping a nameless woman, for no explicit reason other than that any villainy is cooler with a damsel in distress. In response, the military sends out the special troop to get her back: Ace, Speed, Spin, and Big-O. The game spans six stages, from local slums to Japanese castles, before taking you to an underground base hidden under a remote island. As a bit of continuity between levels, you can occasionally catch a glimpse of the main baddie taunting the heroes, who’ll eventually confront you to make a last stand.

Unsurprisingly, there’s some commonality between Zero Team and Final Fight, sharing the same two button configuration (punch and jump), although it also takes a few pages from the later Capcom games. Repeatedly hitting an opponent will knock them off with a heavy attack, but different strings of combo can be executed depending on which direction you hold the joystick. For instance, if you strike your foe while holding up, your character will finish them off with a strong uppercut (volleyball spike for Spin, and Shoryuken-esque rising blow for other male characters), which in turn leaves yourself momentarily vulnerable upon landing. Others are less powerful but safer, which either have short recovery time or tosses one of mobsters into the others to keep them in distance.

Alongside the usual jump kick and the desperation move that drains health, Zero Team has a few other defensive techniques you can use to your advantage. If you get interrupted in the middle of jump, you can promptly break the fall with a quick press of button. Alternatively, you’re able to roll out of your position while downed, especially handy when surrounded by enemy waves. Interestingly, you can also jump in all directions, vertically and horizontally, which is used to hop on higher ground or evade oncoming adversity. Each character also gets an exclusive special move that can help your maneuver – for one, Big-O has a backward roundhouse punch, which is hard to execute but can easily take on multiple foes. 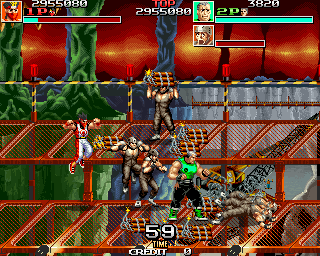 Every once in a while, you’re treated to bonus game where you smash up boxes real good. Speaking of, there’re tons of destructible objects in this game; drums, rocks, pots, trash cans, motorcycles, and other bunches of stuff are waiting for you to be thrown and pop out useful consumables. The kicker is that enemies are just as happy to throw things at you, and items inside will be lost along with it, so it’s important to crash them open before enemies get their hands first. Strangely, you cannot use dropped weapons, and all you can do is to throw them back. The sole exception is rocket launchers, which can blast the goons out of existence and are absolute godsend in boss fights.

Visually, Zero Team shares both ups and downs of the typical Seibu games, being impressive on the technical level if artistically insipid. There’s great attention to backdrops, boasting extremely varied scenery within levels, and each stage is usually bookended with your characters dispatched and picked up by the military. Occasionally you can spot civilians having good time, until you come along and start making a mess, prompting them to run off in fear. For some reason, whoever falls in fight explodes spectacularly into flaming chunks (curiously without any gore), which looks ridiculous but makes the act of knocking out enemies even more electrifying. The satisfying sound effect gives right amount of weight to the action, but otherwise the music is inappropriately chipper and unmemorable. 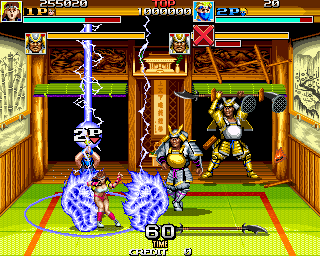 The game as a whole sports a vague ’80s tokusatsu vibe, with the heroes dressed in cheesy, color-coded suits that wouldn’t be out of place in all age superhero show (Spin’s thong bikini notwithstanding). This holds double for enemies, who include some villain-of-the-week stereotypes like samurai warriors or kabuki dancers. Like all good sentai shows, they’re often susceptible to slapstick humor; just try throw a drum on their head for a good laugh. The coolest touch of all has to be how the desperation move comes out, where your character points their dagger to sky as lightning strikes down, tearing everyone close-in apart.

As expected for an arcade game, Zero Team pulls no punches. Right in the first stage, you have to face the spear-wielding henchmen who can effortlessly take your precious lives. The bosses like to call reinforcements into battle, and the last couple of levels are especially rough, where it stops fooling around and piles up more than eight thugs at once. Generally speaking, though, it’s more manageable than tough-as-nails standard of arcade brawlers. It’s slower, less frantic experience than Capcom’s offering, one that wants you to carefully telegraph enemies’ movement and adapt yourself along with it. In this case, the fact that characters are relatively small works in the player’s favor, since it allows more room for crowd control on the field. The final boss is massive pain, as he defies the first law of beat-em-up by attacking sideway, but even he’s gullible to certain tricks, and the more you fight him, you’ll realize he’s not as untouchable as it seems. If you’re interested in Capcom beat-em-ups but turned off by level of dedication they require, then Zero Team may be worth a shot.

When Seibu published Zero Team outside of Japan (distributed by Fabtek Corporation in the US), some balance changes were made. This version, Zero Team USA, is generally easier, mostly because your desperation move deals far more damage than before. This became the base for all later revisions, including New Zero Team and Zero Team 2000; the former swaps the first four stages, while the latter removes the extra life bonus from scoring, a huge roadblock for 1CC run. As of writing, only these two versions are fully playable on MAME.