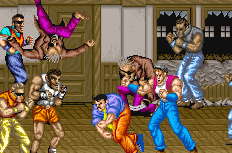 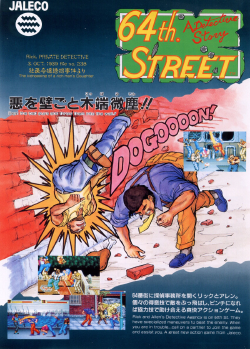 Beat-em-ups are not a particularly varied genre by nature, but when you have a premise as blunt as “beat up everyone on screen until they blink out of existence,” it’s tough to innovate that formula. The most you can do is make it control well, offer a fun and easily replayable time, or at least make it danged weird. “Danged weird” just so happens to be what low-key Japanese game company Jaleco specializes in. Perhaps except for the Bases Loaded baseball series and the Ninja JaJaMaru-kun universe, Jaleco was not very well-known for anything but they dabbled in just about everything. This includes the beat-em-up genre as demonstrated by their Rushing Beat trilogy for the SNES, which provided three games that were respectively mediocre, good, and great but brought down to not-great thanks to bad localization. Yet they even had an arcade beat-em-up a year before Rival Turf! blighted the SNES with its awful ’90s ‘tude cover. Jaleco’s first belt scroller was not a contemporary brawler, but instead opted for a slightly classier urban America set in 1939 with the somewhat misleading title of 64th Street: A Detective Story. That name may fool you into taking it as a Déjà Vu ripoff, but the only game being ripped off here just so happens to be Final Fight. 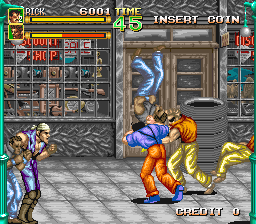 64th Street‘s intro frames the justification for thrashing baddies in a hilariously stupid fashion. Our heroes, scruffy detective Rick and his young protege Allen, are asked by a rich man to locate his kidnapped daughter. Using fantastically improbable deductive reasoning, Rick manages to identify the evil gang behind the kidnapping by comparing the structure of the ransom note to a similarly-printed set of classified newspaper ads. Instead of contacting the authorities, Rick takes Allen along to clean up crime in a less elegant fashion than Eliot Ness. It’s not much better than most other “stories” these sorts of games tend to have, but points for attempting to be original. Anyway, you get to choose from the slower-but-stronger Rick and the faster-but-weaker Allen, whom suspiciously resemble Haggar and Cody. There is actually a bit of difference between their movelists, as they have a special power move by tapping forward and attack (which requires incredibly precise timing) and the standard attack+jump “get offa me” invincible move that drains a bit of life. Rick rolls to deliver an invincible uppercut and can deliver a straight flaming punch to do big knockdown damage, and Allen can do a 360 somersault and charge forward with a dash tackle. 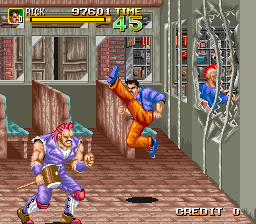 Whichever character you pick, they both have the ability to chuck enemies left or right, and in a twist rarely seen in the genre, you can also hurl baddies into the background. This is often encouraged as you can cause property damage with their bodies, often revealing a bonus or health item by doing so. 64th Street is the type of game where living cats fly out of plaster walls apparently no worse for the wear and you can rescue them for points. There’s also your standard garbage cans filled with fresh food items and improvised armaments. You don’t get too much for weapons, but you will sometimes find the obligatory lead pipe and a shorter but faster wrench, along with a special weapon only found on the final boss which will be denoted. The types of faces you’ll be bashing with fists and steel alike include a rabble of colorfully dressed street urchins with bandanas and boxers in way too short shorts. Then the enemies get even stranger, like eighties hair metal rejects lost in time, eyepatch hunchbacks with claws, and kung fu fighters somehow having found their way into pre-WWII American factories. 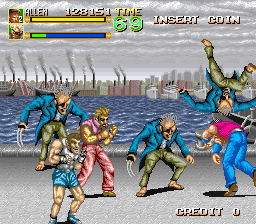 If you think the normal mooks are screwy enough, the bosses are bonafide space cases. They include a pink-haired punk with a megaton hammer, a spinning pirate captain, two burly wrestlers impersonating Elvis, an extend-arm cyborg, and an elevator bellhop who reveals himself as a kabuki warrior. Most of them are painfully cheap and can mow you down with invincible spinning attacks, yet most can be foiled with well-timed jump kicks if you’re patient. After all this zaniness, the final boss is just a normal bearded guy. It would be anticlimactic if he didn’t have two cyborg bodyguards, so it’s still a challenge. Plus, the bearded mastermind has a pool cue that you can beat him with and it never degrades! 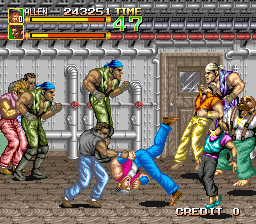 Like the rest of its ilk, 64th Street is best enjoyed with a partner so the power of Rick and speed of Allen can wreck the streets in tandem. Unfortunately, friendly fire is in effect and you can kill your partner if careless. To mitigate this accidental thrash factor, you can grab your partner and toss them across the screen as they automatically pull a flying kick. The damage is nice, but this more importantly puts distance between you two and makes misaimed maiming less likely. 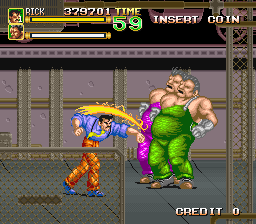 While a technically solid game on its own merits, 64th Street is not the prettiest looking violence simulator. Perhaps attempting to capture the bleak atmosphere of the late thirties, there’s a lot of gray in every background. To compensate, some of the enemy sprites wear rather gaudy outfits like orange tank tops over light blue shirts. The graphics are rather mixed but the music is actually pretty decent and jazzy, though the boss music may shred the ears a bit. So why isn’t 64th Street better known? That may just have to do with Jaleco’s mid-card status on the game company roster. Its release timing also did it no favors, as it came out the same year when Street Fighter II mostly overshadowed beat-em-ups. Brawlers throughout the nineties upped their game through quality (like Capcom’s Alien vs. Predator) or quantity (Konami’s 6-player X-Men). Coming out after this genre’s golden age but before more advanced games like it, 64th Street is lost in time. Regardless, its goofy premise and background-tossing carnage potential make it worth investigating for the hard-boiled gamer.